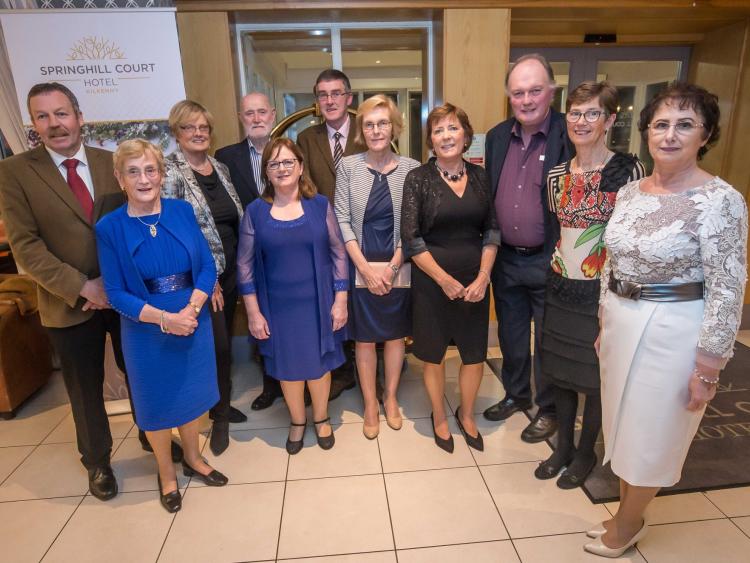 Board of management and staff from thirty years ago during the Castlecomer Community School Reunion PICTURE: PAT MOORE

Three decades of modern education was marked at a celebration at the weekend when staff and students from Castlecomer Community School marked their 30th birthday.
Former and present students and teachers attended the dinner at the Springhill Court Hotel on Saturday.
Principal Séamus O'Connor told The Kilkenny People that there was a great turnout for the occasion.
“The story of Castlecomer Community School is that of a fantastic amalgamation of the Presentation Convent Secondary School and the VEC. On Saturday evening we had the opportunity to look at the school's achievements over the past thirty years and to celebrate our successes,” added Mr O'Connor.
A survery of students over the past three years has revealed that 79% of pupils now go on to degree courses at third level colleges.
“Great credit is due both to our students and their parents, many of whom continue to support their children,” he remarked.
Out of the 33 teachers on the staff on September 1987, only two still remain on the current staff of the Community School – and three members of the original staff are deceased.
The school has undergone many changes over the past 30 years and the facilities have been ungraded and improved resulting in a state-of-the-art school.
The school is also renowned for its excellent sports facilities including a flood lit running track. The project was masterminded and overseen by the first principal of the Community School, Mr. Michael Hester and the design, drawings and engineering expertise was provided by local engineer, Mr. Terry Brennan who has been involved in every major building project ever since. The local athletics club also had a major role in ensuring that the running track was included in the project.
The school provides the broadest choice of subjects possible in a co-education setting to all the students in the community irrespective of background or social status. The ethos of Castlecomer Community School, as the Admissions Policy states, is befitting its origins, is one where Christian values predominate, whilst maintaining a deep respect for the diversity of traditions, values and beliefs found in the broader community’.