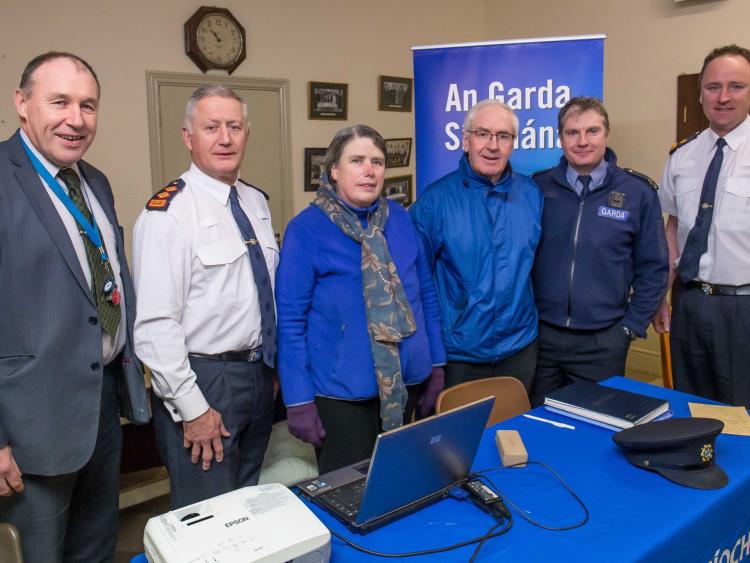 A weekly garda clinic will be set up in the town of Ballyragget to help combat crime and reassure the local community and offer crime prevention advice.
The announcement was made by Chief Superintendent Dominic Hayes at a public meeting held in the town last week to inform the public about setting up a community alert text scheme.
“It is really important to be supported by communities like Ballyragget. Community engagement is something we cherish and we could not do our jobs without your support,” he said.
Chief Supt Hayes told the meeting that in the past 36 months there had been 30 new recruits but acknowledged that the closing of the garda station had left ‘a huge void’.
“I am glad to announce that the gardaí have been given the use of a room in the parish hall where we will hold a weekly clinic,” he added.
Crime Prevention Officer, Sergeant Peter McConnon said that ‘community text alert plays a huge role in preventing crime’.
“It is a win-win situation for the gardaí and the local community,” he said adding that burglaries had reduced by 66% over the past five years.
To date approximately 17,000 people in the Carlow/Kilkenny Garda Division has signed up for community alert schemes, which is the second highest take up in the country.
“These schemes make our towns and villages inhospitable places for criminals to do their trade,” added Sgt McConnon.
Superintendent Derek Hughes also attended the meeting.
He told those present that their ‘singular focus is to keep crime low’ adding that the gardaí are ‘trying to prevent crime before it happens’.
“We need you to be the eyes and ears of the community, not intervening in but reporting any suspicious activity to us,” he said.
Supt Hughes also pointed out that there was an increased garda presence in the North Kilkenny town and pledged that this will continue.
Councillor Pat Fitzpatrick (Fianna Fail) welcomed the establishment of a garda clinic in Ballyragget.
“The provision of a garda clinic is welcome and I’m pleased that concerns expressed by me and those in the wider community have been heeded and action taken. It’s important that gardai are placed at the heart of our communities as was the case in the past.
“Rebuilding relationships between our gardai and rural communities is critical in tacking rural crime.
“I will continue to lobby for the provision of more Gardai across North Kilkenny, “ he added.
Meanwhile Cllr Maurice Shortall (Labour) remarked that the attendance at the meeting was ‘encouraging’.
"Its so encouraging to see so many people present and from my own experience of community alert tonight is a positive start.
“In Castlecomer we were in a similar but less fortunate position in so far as we were not blessed with such a high power garda presence instead we invited Marie Stapleton and Renne Hogan of the Lisdowney Community Alert Scheme to take us through their experience of the ups and downs of their scheme. This proved the catalyst and from there we never looked back thanks to encouragement and assistance from people like Sgt. McConnon and Margaret Quinn of Muintir na Tíre.
“Our meetings are held monthly with Chairperson Anna Creedon presiding and nearly always there is a local garda present.
“It’s imperative that all meetings are 100% confidential. The next step for Ballyragget is I believe to seek a representative from every estate and street in the town as well as from the outlying areas of Oldtown and Knockroe.
“Let tonight be the start when we examine how Ballyragget will benefit from the presence of an active Community Text Alert Scheme and hopefully the same reduction in crime will follow,” said Cllr. Shortall.