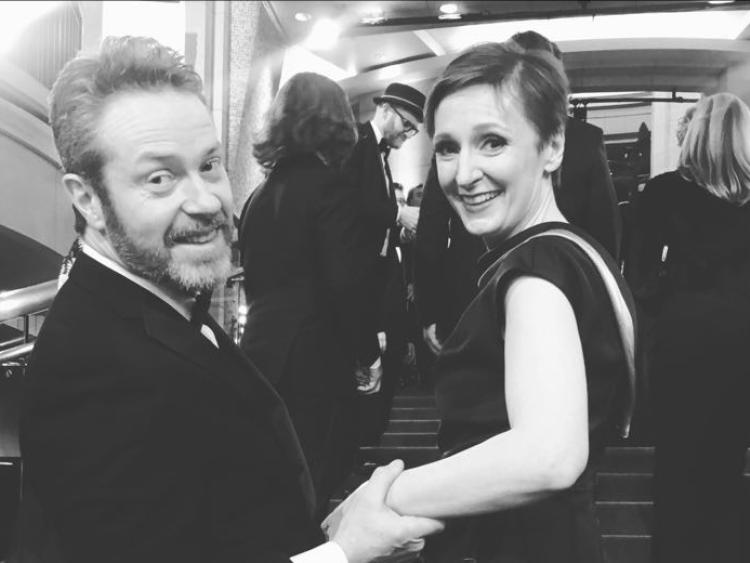 Director Nora Twomey and Michael McGrath at the Academy Awards

The Irish Cartoon Saloon team of Nora Twomey, Tomm Moore and Paul Young walked up the red carpet at the Dolby Theatre on Sunday evening at the 90th Oscars.
Cartoon Saloon were nominated for Best Animated Feature for Director Nora Twomey’s first solo feature film The Breadwinner. And while they did not return with the coveted Oscar they remain heroes in the hearts of many in Kilkenny.
The story features Parvana, a 12-year-old girl who gives up everything to provide for her family and reunite with her father in Kabul, Afghanistan just as the Taliban regime began to fall.
The film has won numerous awards to date including Best Independent Animated Feature Film at the Annie Awards, Best Animation at the LA Film Critics Association Awards: Best Animated Feature at the Toronto Film Critics Association Awards, and the Grand Prize and Audience Award at LA’s Animation Is Film Festival.

The Breadwinner boasts the breathtaking hand-drawn animation that has made Cartoon Saloon one of the world’s most well-loved and respected animation studios. It is a co-production between Cartoon Saloon, Aircraft Pictures and Melusine with compositing by Guru Studios in Toronto. Hollywood actress and human rights activist, Angelina Jolie is an executive producer on the film.

It was the third Oscar nomination for the Kilkenny-based animation studio.