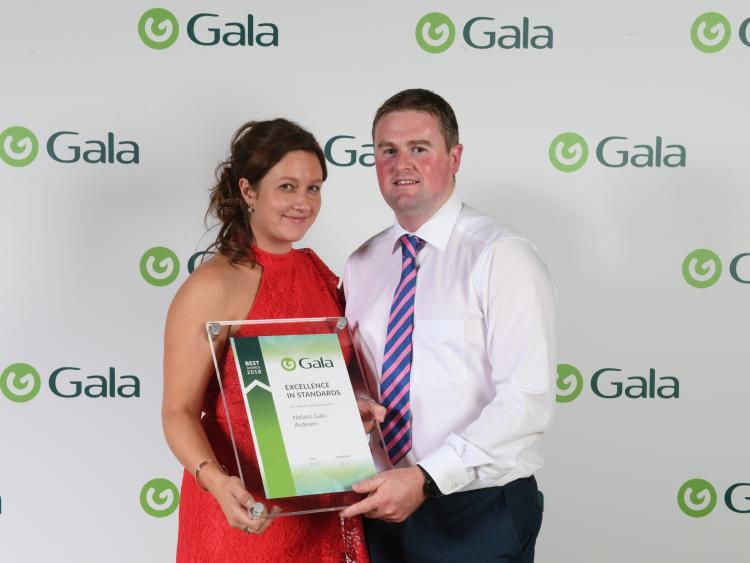 A Gala convenience store from Kilkenny has been awarded the Gala B.E.S.T Award for excellence in retail at the 2018 Gala Annual Conference and B.E.S.T Awards, which took place last week at The Killashee Hotel in Naas, Co. Kildare.

The conference marked a celebration of 20 years in business for the Gala Retail Group, celebrating the achievements of the Group and its retailers.

The B.E.S.T. Award is granted to outstanding stores following a comprehensive and independent assessment process under the Gala Business Excellence Standards Tool programme. The awards ceremony was MC’d by TV personality and actress, Aoibhín Garrihy and featured entertainment from actor and comedian, Ristéard Cooper.

Nolan’s Gala store in Ardnore was awarded a B.E.S.T Award at the annual event.

Speaking at the conference, Gala CEO, Gary Desmond, said: “We offer our congratulations to Nolan’s Gala store which has been recognised for excellence in retailing in the Gala Group’s 20th year in business.

“This store provides a fantastic service to its customers, day in, day out and is amongst the B.E.S.T retailers in the Gala Group. We wish Nolan’s Gala another successful year and look forward to celebrating their future successes.’’

The Gala annual conference brings together all of the retailers in the Gala Group for an inspirational event with motivational speeches, a trade fair and an update on the Gala business and new initiatives.

During the conference, Gala’s CEO, Gary Desmond, thanked Gala retailers for their ongoing commitment and excellence in retailing over the years and looked back at the key milestones and activities that have aided in the Group’s growth and continued success.

At last year’s conference, the Group announced its biggest-ever investment in marketing – a €1 million commitment to its #GalaGifts marketing activity which was created to thank and reward Gala consumers and the communities they operate in for their continued loyalty and support through the years.

To date, #GalaGifts has seen the Group giving away a brand-new car via a huge social media giveaway on its Facebook page; awarding €20,000 worth of prize funds to three primary schools as part of its ‘Gala Gifts for Schools’ competition and run an in-store ‘European Holiday Giveaway’ promotion which saw five lucky customers win travel vouchers to the value of €1500.

The #GalaGifts continue as November sees the Group launch its biggest in-store promotion yet. With a prize fund of €300,000, Gala customers will have the chance to win brand new cars and 150,000 instant prizes which will be up for grabs in-store.

Gala was established in 1998 and is a wholly Irish-owned convenience Group. There are 200 stores in the Gala Retail Group, including Gala and Your Stop stores. Gala stores are locally-owned and are renowned for their commitment to the local communities in which they operate.