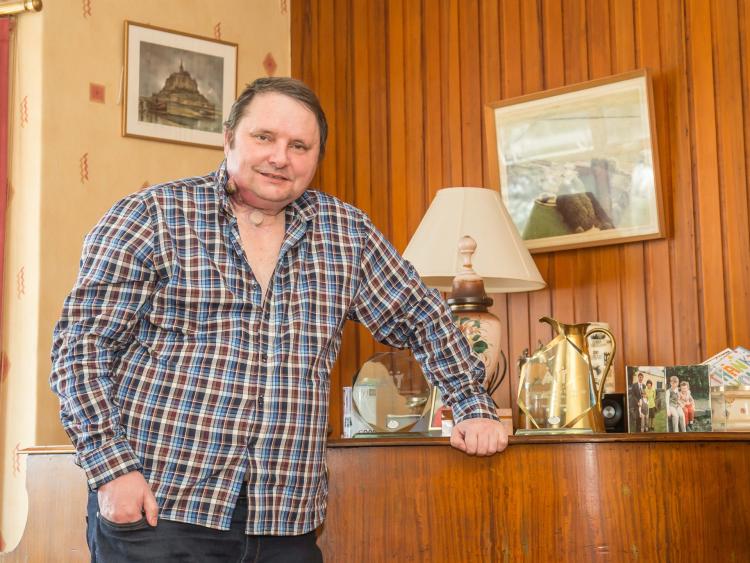 Kilkenny man John Holmes at his home at Pococke

John Holmes, who has an advanced form of cancer and needs funding for the immune inhibitor Pembrolizumab is seeking a meeting for the Minister for Health, Simon Harris.

The Kilkenny man's plight was raised in the Dáil earlier this week by local deputies John McGuinness (Fianna Fáil) and Kathleen Funchion (Sinn Féin) who sought a firm commitment from the Minister for Health to meet with John and the fundraising committee.

John has an advanced metastic neo endocrine tumor, a high grade tumor similar to small cell lung cancer. His best chance of beating it is a course of injections of the immune inhibitor Pembro which is manufactured by MSD. Each injection will cost €5,111. A fundraising committee called John Needs Pembro has been set up to help him pay for this treatment.

Deputy Funchion said: "The drug is available through the HSE, its available to other cancer patients. Clinically and medically its shown that its working, so whats stopping John Holmes from being able to access this?"

Deputy McGuinness told the Dáil that the recommended treatment for Mr Holmes is thirty infusions.

"This man is dying if he does not receive treatment to give him an extension of his time," he said.

To date over €92,000 has been raised.  John received his tenth infusion of Pembro this weel. At €5,111.50 per infusion this represents a total outlay of €51,115 - all of which has been raised privately through the generosity of the people of Kilkenny.

A spokesperson for the John Needs Pembro campaign said:

"This is the first time John's case has been discussed in the Dáil and we couldn't have been prouder of our local TD's as we watched John and Kathleen advocate John's case. They were insistent that Minister Simon Harris meet John and his family face-to-face, and indignant at being fobbed off by Finian McGrath's scripted responses. Both John and Kathleen went beyond political concern to show their their personal concern for John and his family," he said.

"We should add that this was a cross-party effort. A Fianna Fail TD and a Sinn Fein TD do not often work together but John McGuinness and Kathleen Funchion did exactly that yesterday in order to reach the right outcome for their constituent, and for that we are very grateful to them both," he said.

Sunday, May 19: Sponsored Skydive by Conor McGabhann: Sponsors can donate to gofundme.com/manage/john-needs-pembro and mention Conor in the comments section.

Thursday May 30 & Friday, May 31: Bucket Shake outside Dunnes Stores.