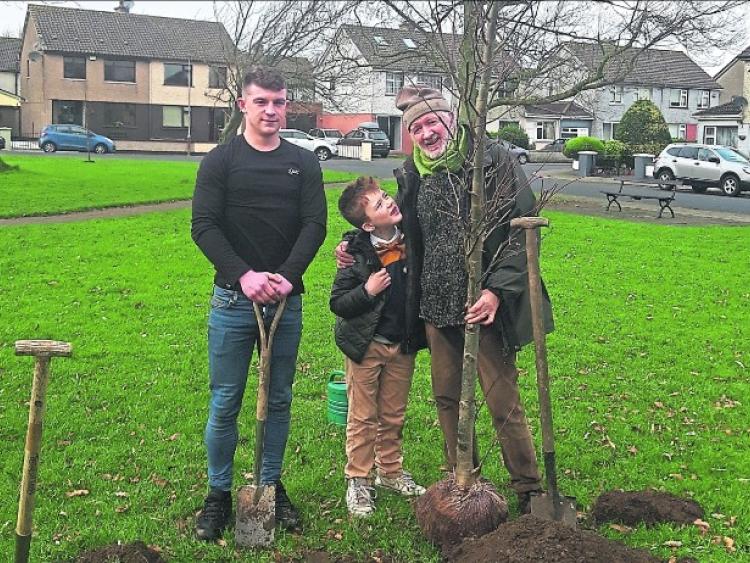 Raphael O’Reilly, Stephen Noonan and Malcolm Noonan planting one of five trees donated by Kilkenny County Council to mark the 50th anniversary of the Larchfield estate

The final days of 2019 saw residents and former residents of my old housing estate in Larchfield, Kilkenny gather in James Stephens GAA Club.

The clubhouse, which overlooks the estate, was the venue for the assembly, who came together to celebrate the 50th anniversary of the estate.

We moved to ‘Larcho’ (as my dad calls it), in 1969. Mam and Dad started raising four of the ten of us in the married quarters on the grounds of James Stephens Army Barracks.

All I could think, talking to my mam on the night of the party, was that it must have been such a joy to have received that letter from the ‘Corpo’ that they were to be housed. Imagine when they got the actual key!

I think that most of the residents moved in that November, but one family had been given their key in July! That must have been surreal, almost post-nuclear test site stuff, to be in the estate all on their own.

As I looked around the room on the night of the party I saw many of my peers. People of similar vintage who grew up, played in the handball alleys or basketball court, hunted for rabbits in Maulmacs, fished for eels down the river or played on the swings and roundabout (which is sadly no longer there).

I also saw our collective parents, some now widowed, but all who endured hardships, sadness, loss, joy, elation. Their daily lives played out within the cavity block confines of the corpo house.

Me, I recall the melting tar on the roads of the estate in the hot summer of 1975, St Patrick’s Brass and Reed Band playing under the lamplight a week before Christmas, gunfights in the handball alleys and wheeling a shopping trolley with an amp in it up to the dressing rooms at James Stephens club where our band practised.

Many of the early settlers of Larchfield have sadly passed on. Tommy and Marie Coyne come to mind in particular; two innovators, Marie running a creche from their converted garage and later Tommy trained in the famous Tutty’s of Naas and set up a shoe repair business in that same space when he was made redundant from Fit Remoulds.

Today they would be contenders for entrepreneur of the year but then it was a resilience, a stoicism that existed among that generation who just got on with things at times of deep economic stagnation.

For those commentators who are cynical of the council house, of social housing, for economists who told us that we should let the market deal with housing or that we should subsidise private landlords as a means of councils shedding their responsibility towards housing provision, I say look at Larchfield 50 years on and see what a stunning success it has been.

Larchfield was a brilliantly designed and constructed scheme, built by McInerneys on the old Archer merchant family estate and where the grand Larchfield House once stood.

Four mature oaks, one in front of our house, probably still mark the old remnants of the estate and the front two rows now face a soccer pitch that gets extensive use at weekends.

Mahon and McPhillips water treatment factory once adjoined the estate. It’s a pity that the playground was removed but now Larcho is serviced by the city bus which is just great for those living there. Time moves on.

On Saturday last, I went along to plant some trees, donated by Kilkenny County Council to mark the 50th birthday of the estate.

I wasn’t looking forward to it too much; I was tired that day. But no sooner had I set the spade in the ground, when Valerie O’Reilly (Thornton) arrived out from her mam’s house with her son, a watering can and two spades to help.

That to me sums up the spirit not just of Larchfield, but of the enduring spirit of community that evolves over time through social housing.

As we continue to grapple with a housing and homelessness crisis, we would do well to remember what we did well as local authorities - that is provide good quality housing which in turn creates sustainable communities and which stands the test of time.

A big thanks to Sheasky McGuire and all who organised the night in the club. It was a great gathering.

Who will be there to celebrate the 100th anniversary of Larchfield is anyone’s guess but one thing is for sure - these houses will still be there, still providing shelter and a space for children to grow up in.

We remember those who have passed on. It is so wonderful to see new families moving in and a new generation of children playing on the streets.

In building Council estates through the decades since the foundation of the state, we weren’t just constructing ‘units’ as seems to be the focus of current housing policy; we were building cohesive, inclusive communities, building families lives and their stories.

This is what we have done well as a corporation or a council for many decades and deserves to be recognised for the great social value it continues to provide. Let’s get back to building estates like Larchfield again.