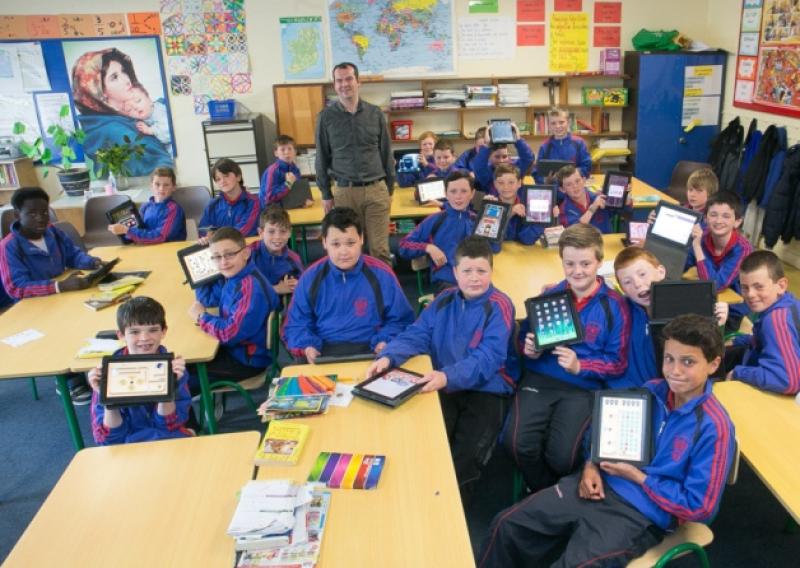 Fifth class boys at St Patrick’s De la Salle school in Kilkenny City have been lauded for their participation in a @Dissolving Boundaries’ project as they linked up on line with school children from Belfast.

Fifth class boys at St Patrick’s De la Salle school in Kilkenny City have been lauded for their participation in a @Dissolving Boundaries’ project as they linked up on line with school children from Belfast.

Mr Niall Flaherty’s class were the only class in Kilkenny to take part in the project.

They first made contact with Ms Foyle’s class of boys and girls in St Josephs PS, Carryduff, five miles south of Belfast City Centre, at the start of the school year.

And now after almost eight months of shared experience and learning, views shared and work compared, the kids will join up for a day out this week - out of the ‘virtual world’ - at the National Aquatic Centre in Blanchardstown, Dublin.

Last Thursday morning, the parents of the boys turned up in class to see the work their sons had completed for their project, and also skype the classroom in Belfast that they have been working with over the school year.

Mr Flaherty thanked the pupils and parents for their work on the project, stating there were 195 schools on the island which took part in it. The scheme was run by the third level colleges in Maynooth for the Republic of Ireland and Coleraine University for Northern Ireland.

The work of both classrooms so impressed the administrators that St Patrick’s and St Josephs were both commended as one of the top five, out of 95, partnerships in the scheme.

The Children began the year talking about the up coming World Cup - comparing teams and who they thought would win. As Mr Flaherty stated this was right up the alley of the De La Salle Boys and it just took off from there. From information about the teams who were participating, to their population and features like the Amazon forest contect grew and grew. Blogs, wiki messages and pictures followed.

Each of the children from both schools had their own personal details logged on - like hair colour, favourite pastime and of course their heroes - with Eoin Larkin, Henry Shefflin and Liam ‘Chunky’ O’Brien featuring with the De La Salle boys - giving a firm indication of where their sporting loyalties lie.

Deputy principal Joe McKeon was delighted with the success of the project, and commended Mr Flaherty and his class for the enthusiasm and commitment they have shown in making the project such a huge success.

As these boys enter their final year of St Patrick’s De La Salle next September, computer coding will be introduced to the school.