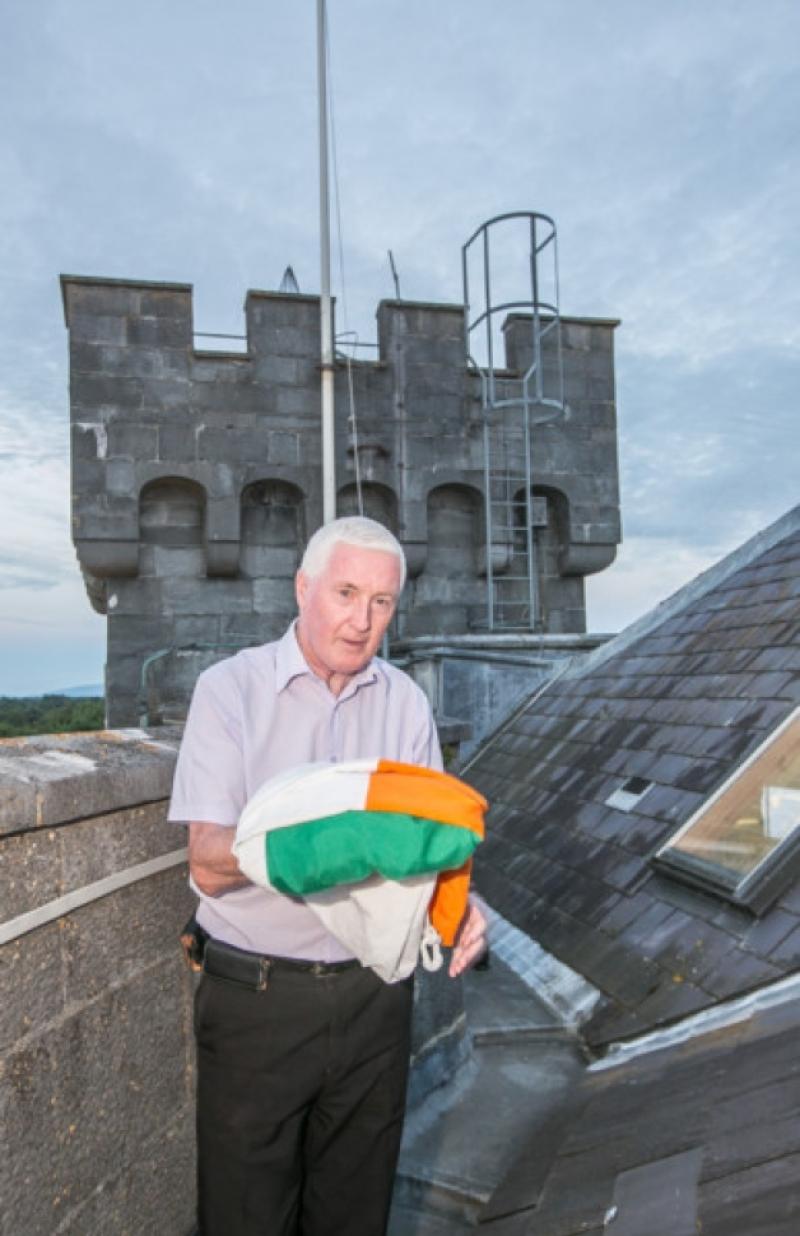 He threw an Academy award winning actor out of Kilkenny Castle and he jostled the legendry Cork hurler, Christy Ring (in jest) at the launch of Eddie Keher’s autobiography.

He threw an Academy award winning actor out of Kilkenny Castle and he jostled the legendry Cork hurler, Christy Ring (in jest) at the launch of Eddie Keher’s autobiography.

However, the much loved figure who helped to make Kilkenny Castle the success it has become since it opened to the public in 1976, was once the topic of conversation at a lunch in Buckingham Palace.

Many yeas ago, head tour guide, Frank Kavanagh was asking one of the Butler family from the castle, a Mrs Pole-Carew if there were any ghosts in the castle. She was Lady-in-Waiting to Queen Elizabeth II and a confidante of the monarch.

She replied that there had been many ghosts in the castle, then suddenly she stood up, an old lady, very animated and said they were everywhere, (stretching out her hands) even eating the grass on the lawn. A moment later Frank realised that she had thought it was “goats” he had asked about.

A few years later, the Right Hon Charles Ducain, Mrs Pole Carew’s grandson told Frank that his grandmother had told the queen the story over lunch in the palace and that she laughed heartily at the tale.

Yesterday was Frank Kavanagh’s last day working in Kilkenny Castle and with his departure, the OPW run institution has lost an integral part of what makes it so appealing. He had the same warm welcome for paying guests, presidents, royalty, taoisigh, film stars, billionaires and sports stars who entered the castle and park.

Frank was on the governing body of the country’s biggest union, SIPTU but resigned because he did not like the direction the union was taking. He represented the 500 tour guides in OPW centres around the country.

He was part of the 2004 John Kerry US presidential election campaign for three weeks as part of a training programme by SIPTU and “probably paid for by the HSE”.

And on his last day in work, he admitted that the castle is definitely haunted with not one but three ghosts.

The man from the White Bridge, on the top of the city’s Walkin Street, is on first name terms with the Butler family who owned the castle and was made an honorary life member of the Butler Society for services to the castle and Kilkenny.

He has brought film stars like Kevin Costner and Sandra Bullock around the castle and he gave designer John Rocha a tie during the first ever fashion show in the Great Hall in 1979.

He cherishes the time he greeted then Taoiseach, Jack lynch at the castle in 1977. “He was a gentleman, he showed there was a man behind the title and he brought me and Mick Muldowney from St Fiachre’s Place for lunch,” he recalled.

His first tour was in 1976 and the party included his then GP, the late and much loved, Dr Richard Purcell.

It wasn’t all fun at the castle. John Hurt was attending the opening of Arts Week and started to smoke a cigar in the Long Gallery. Frank asked him to go to a window and smoke.

He swore at Frank and swung at him, hitting him on the arm. Frank left the room and asked in loud voice if there was a Mr Hurt present, Hurt immediately came over and after a tirade of abuse accompanied Frank to take the call. Frank got him outside and that’s where the Oscar winner stayed.

Another time, members of the band, Frankie Goes To Hollywood, were breaking cups in the old kitchen under the Long Gallery and Frank was called. After singing a few songs with them he cajoled then into leaving.

He has great memories of the late Hubert Butler, the celebrated writer from Bennettsbridge who showed him where the tapestries and charters were hidden for safety reasons.

Frank compares the castle to a major industry, employing many people, helping to fill many hotels and B&Bs and bring millions of euro to the city every year.

One of his most cherished memories is dancing with his little daughter, Tanya in the long Gallery back in 1979 and on his last day in the job he really enjoyed, he reflected on the love and support he had received over the years from his wife Sandra and his entire family.

As far as Frank is aware, there have been three ghostly sightings in the castle.-

One occurred in the Duchess boardroom in the West tower witnessed during an open air production of Macbeth by members of the audience.

The ghosts of three children reside close to the kitchen and they were seen by Frank and others on St Patrick’s day 1982 during the big snow. The third is a mother and child in the Long Gallery that was once one of a series of bedrooms. “The castle is haunted who would blame anyone for coming back here,” he said.

He stressed the need for more events in the Castle. “Anything that brings the castle and park to life for the good of the city and its people should go ahead there,” he added.

“One of the happiest times in the castle were the Christmas parties for the special needs children with my late father, Michael as Santa arriving in the fire engine and Leonora Kerry Keane of the Kilkenny People switching on the lights and giving out the presents.

He feels that county is underdeveloped for tourism. “Look at Callan, Kells, Freshford when I take visitors around the county they are amazed by what is to offer,” he said. “We have the Medieval Mile we should have our Norman Circle, it would be a huge boost to rural Kilkenny.”

He knows that he is extremely lucky to have worked in the castle and yet, the castle was lucky to get someone of his demeanour, ability and way with people.

He looks back with honour to be present when Brian Cody received the Freedom of the City in the castle.

“The Clancy Brothers concert with Tommy Makem in 1983 was also brilliant” he said.

“It has been a fantastic journey,” he concluded.