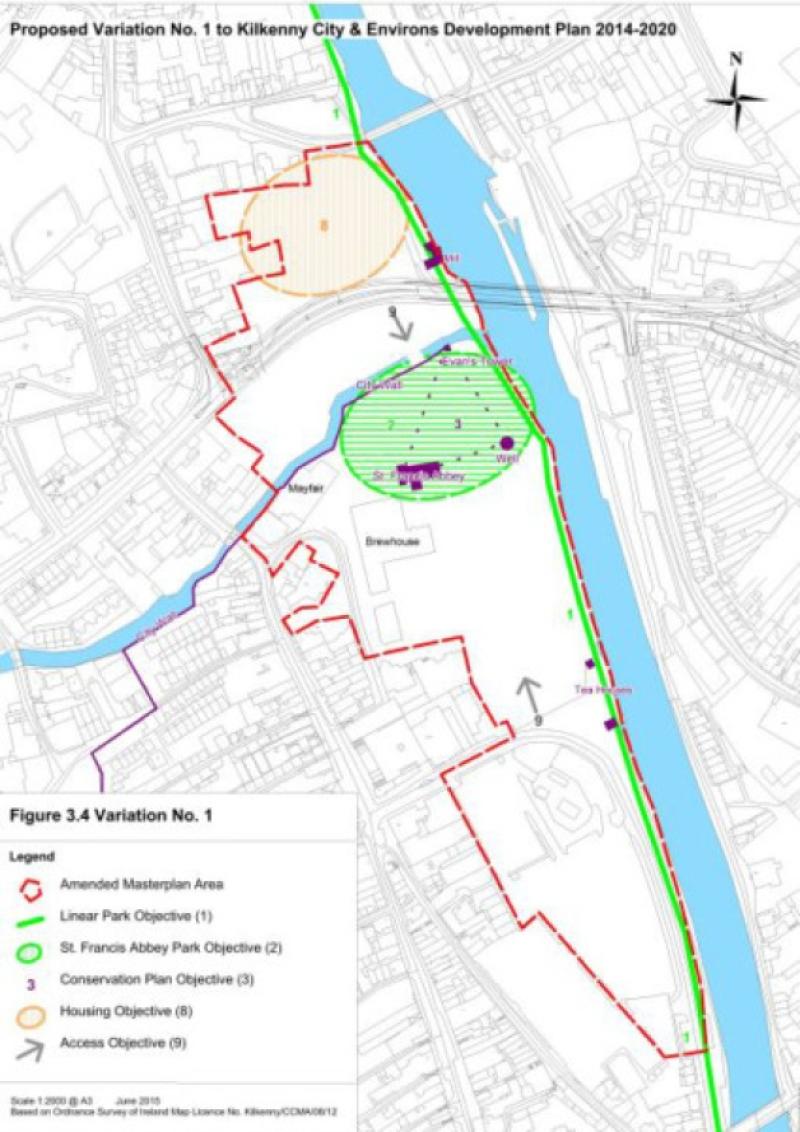 Members of the public have just over a fortnight to make a submission on the proposed variation to the Kilkenny City and Environs Development Plan 2014-2020.

Members of the public have just over a fortnight to make a submission on the proposed variation to the Kilkenny City and Environs Development Plan 2014-2020.

The variation sets out nine development objectives and the map (pictured here) to be inserted into chapter three of the plan. The map shows a number of defined areas which have been clearly designated for different uses.

The first objective is for the creation of a linear park along the western bank of the River Nore, connecting to the existing linear park north of Green’s Bridge and the park south of the Masterplan area.

The second sets out the provision of an urban park in the vicinity of the St Francis Abbey, incorporating Evan’s Turret and St Francis’ Well, and taking into account the recommendations of the archaeological strategy developed in the preparation of the Abbey Creative Quarter Masterplan and other constraints.

There is an objective to provide for housing within the masterplan in the area north of the Central Access Scheme, and south of Greensbridge. The housing zone can be seen at Figure 8 in the adjacent map.

A further objective in the proposed variation is for ‘park and walk’ facilities for car and bus/coach parking at a site or sites in close proximity to the Abbey Creative Quarter Masterplan area to service both the masterplan area and the city centre generally.

There is also a provision for an urban street ‘of pedestrian and cyclist priority’ between the Central Access Scheme and Bateman Quay, crossing the River Breagagh at the existing bridge crossing. To provide for traffic management measures on the street such as to inhibit the flow of through traffic and heavy goods vehicles.

The sixth objective involves developing a low carbon energy strategy for the masterplan area, and advancing the provision of ‘near zero energy’ buildings on site.

Further objectives detail the preparation of a ‘Heritage Conservation Plan’ for the abbey, turret and well in the context of the existing City Wall conservation plan, in conjunction with the Heritage Council, the Office of Public Works, the National Monuments Service, the Department of Arts, Heritage and the Gaeltacht and other relevant stakeholders.

The variation also provides for the preparation of an urban design criteria and recommendations and archaeological recommendations for the implementation of the Abbey Creative Quarter Masterplan, and (another) ‘to finalise and adopt the masterplan and to incorporate it into the Kilkenny City and Environs Development Plan 2014-2020’.

These objectives will be inserted into chapter three of the plan (Core Strategy).

A copy of the proposed variation, including a Strategic Environmental Assessment (SEA) and Environmental Report and Appropriate Assessment (AA) screening report, may be inspected by the public at the following locations until July 21:

Written submissions or observations with respect to the proposed Variation, SEA Environmental Report and AA Screening Report made to the Planning Authority within this period will be taken into consideration before the making of the Variation.