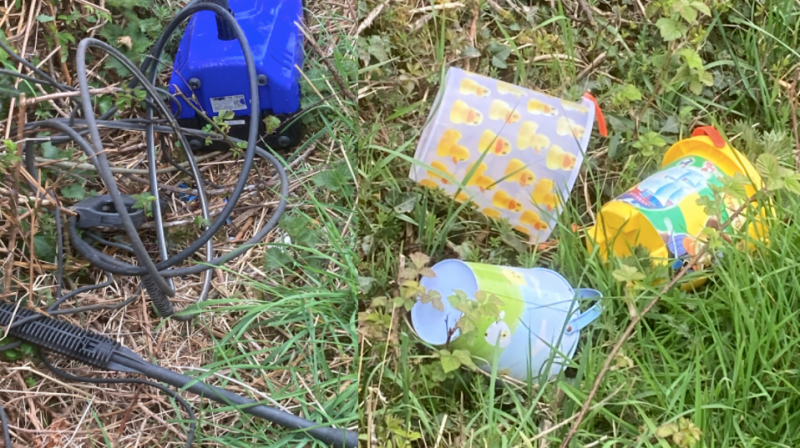 The litter-picking efforts of the Callan, Coolagh, Windgap, Tullahought, Ahenny, Faugheen, Clashnasmuth and Owning community volunteers over the previous eight weeks would see the area in good stead for another long while, or so it was thought.

However just last weekend the usual wrappers, cups and cans began accumulating again and have now been joined by a tyre on the roadside in Seskin.

Further, a freshly filled black bag of rubbish was thrown into the stream at the gullet in Windgap where the dry weather and low water levels left it lying under the bridge.

Still further, on the left hand side of the road approaching Lamogue Cross, a dark Blue Draper PW 1600 100bar Power
washer was thrown into the dyke and nearby a selection of children’s sand buckets were left or lost.

These acts of disrespect follow the work of community volunteers whose reports and photos of littering and dumping have being rolling in ever since they laid down their bags and litter-pickers for some well-earned respite.

Elsewhere on a growing list, tyres and black bags of rubbish were reported inside the banks at either side of the entrance to
the forestry on the Hill Road out of Windgap.

Currently the purchase details of the Blue Draper Power Washer are being investigated and it is hoped its owner will “call and collect” it over the weekend.