History made as McGuinness elected mayor 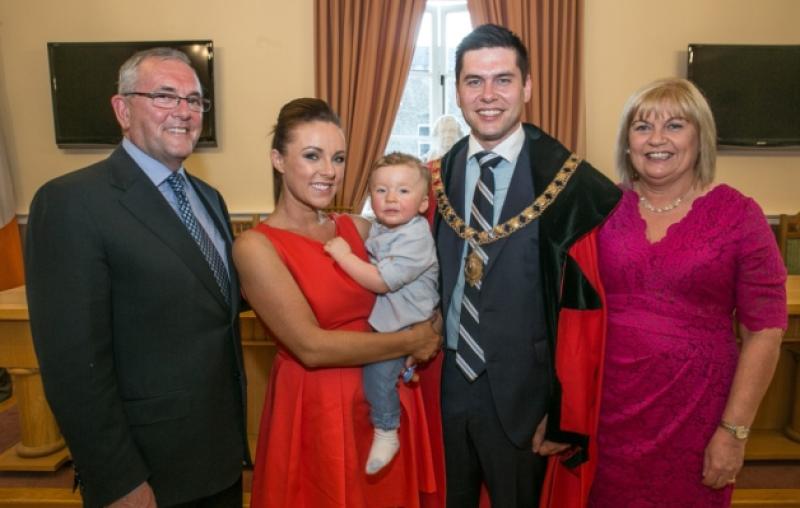 One hundred years of history was made this evening with the election of Andrew McGuinness to the office of Mayor of Kilkenny (City Municipal District).

One hundred years of history was made this evening with the election of Andrew McGuinness to the office of Mayor of Kilkenny (City Municipal District).

Four generations of the McGuinness family have now held the office, with Andrew making it, between them, 15 terms of office. The Fianna Fail councillor was proposed by Cllr Joe Malone (FF), and seconded by Cllr Matt Doran (FF).

The local TD was in attendance at tonight’s meeting, along with many friends and family members of Cllr McGuinness, including Andrew’s partner Carol Knox and his one-year-old son Jack.

Tonight’s election, at the first meeting of the new city municipal district, was not unopposed. Green Party councillor Malcolm Noonan was proposed by Sinn Fein’s Kathleen Funchion as an alternative mayor. The issue came to a vote, with the five Fianna Fail councillors and three Fine Gael councillors voting for Andrew McGuinness, and Cllrs Funchion, Kennedy (SF), Noonan (Green Party) and Gardner (Ind) voting for Noonan.

Eight votes to four saw Cllr McGuinness elected to chair the municipal district, which comprises the electoral areas of Kilkenny City East and Kilkenny City West. In his speech, Mayor McGuinness touched on a variety of issues for the coming year, including tourism, the housing crisis, homelessness, the Local Property Tax, and animal cruelty. He thanked his supporters for the help they had given him, and thanked the elected members for putting their trust in him.

“The office of mayor is something that I have looked on with the greatest respect since I was a child,” he said.

“I will never forget the pride that my late grandfather took in wearing the mayor’s chain – so much so that it was difficult to take it from him.”