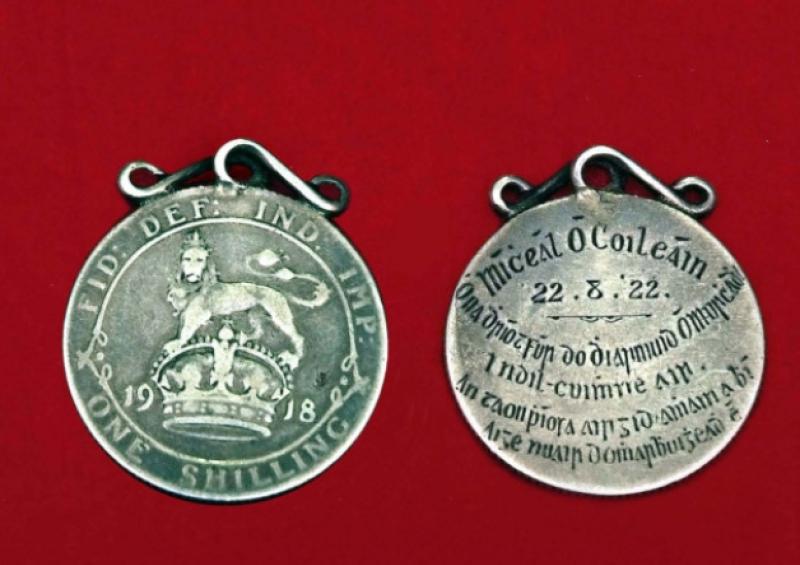 For the first time in 91 years, a historic piece of Irish military memorabilia has seen the light of day.

For the first time in 91 years, a historic piece of Irish military memorabilia has seen the light of day.

However, mystery still surrounds the ownership of the only piece of money found in the pockets of the late Michael Collins when he died.

Last week, invited guests to the James Stephens Army Barracks in Kilkenny were stunned when Lt Larry Scallan, an army historian said that the shilling in The Big Fella’s pocket when he was shot in Beal Na Blath on August 22, 1922 was on display in the military museum for the launch of the Kilkenny Musical Society’s show, Michael Collins - the Musical. It was the only money he had on him on that fateful day.

The shilling was given to a Free State soldier, Diarmuid Murphy by Collin’s sister after his death and is currently owned by the mother of a serving soldier in the Kilkenny army barracks.

The inscription on the back of the coin in old Irish says: “Michael Collins; 22. 8. ‘22; From his sister to Diarmuid Murphy; in beloved memory of him; The one piece of money he had when he was killed.”

It has remained in the same family since 1922 and no information on the current owners is being divulged in case it is stolen but it has to be someone with a strong military heritage. The musical will be staged in the Watergate Theatre, Kilkenny from April 6 to 12 and yes, Dev makes an appearance.