“Without RoActemra I wouldn’t be here today." 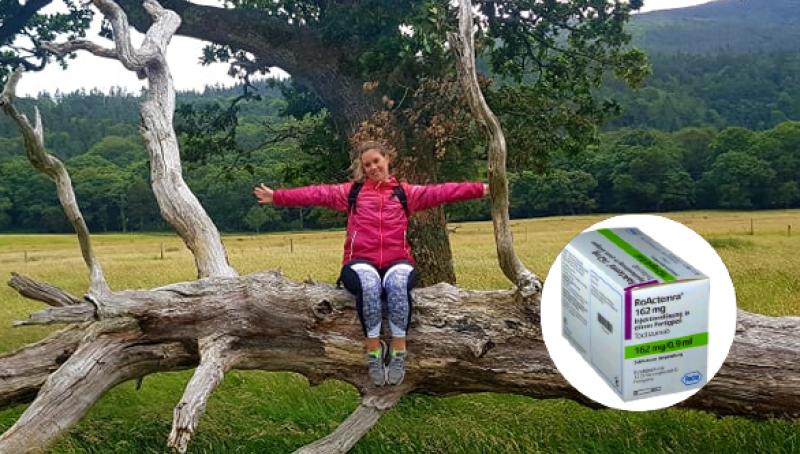 An arthritis drug being used to treat Covid-19 patients is now in short supply globally, leaving local people who use it to treat life-changing conditions at risk.

Tocilizumab, sold under the brand name RoActemra, is used to treat rheumatoid arthritis. For some arthritis patients it is the only drug that their body will effectively respond to, making it a lifesaver, as is the case for Kilkenny woman Veronica Kapsova.

Veronica was diagnosed as a toddler with systemic juvenile onset rheumatoid idiopathic arthritis, a form of arthritis that affects only 3 per cent of people worldwide.

At the age of eight a flare-up in her optic nerves left her temporarily blind and soon after that she was confined to a wheelchair for a period. She was subsequently diagnosed with a serious heart condition, requiring a magnetic shunt to be implanted.

Her doctors in the Czech Republic couldn’t find a treatment at the time that could adequately deal with her condition. Powerful steroids did little to quell the pain.

After moving to Ireland in 2006, things worsened before they got better.

Veronica’s migraines grew more intense, she developed a benign brain tumour that required multiple surgeries and was treated for meningitis and a rare form of inflammatory arthritis called Still’s Disease.

At the time, Veronica was only a teen trying her best to acclimatise to a new country and a new school.

She was subsequently referred to paediatric rheumatologist at Our Lady’s Hospital in Crumlin Dr Orla Killeen, who changed Veronica’s life.

Dr Killeen introduced her to a biological treatment that restored the ability of the body’s immune system to fight infection and disease.

It came with the warning however that because Veronica’s arthritis was so aggressive her body would eventually stop responding to the treatment.

The efficacy of the treatment lasted  three years and in that time Veronica could be  herself again was even able to attend school.

2012 was the year when her biological treatment began to become ineffective, and it was a particularly tough year for her after experiencing a life relatively free from  the clutches of chronic pain for three years.

With no alternative effective treatment available the big worry at the time was that Veronica’s arthritis would become a life-limiting condition.

While all these thoughts were swirling around in Veronica’s head she still felt determined to continue striving for personal goals.

It was in January 2013 that Veronica was introduced to RoActemra, a new drug that proved almost miraculously effective for her when it felt like time was running out.

“Without RoActemra I wouldn’t be here today, that’s the reality of it,” she said.

“In the last few years RoActemra has allowed me to do wonderful things such as giving me the strength to complete a Master’s degree and even run in a mini-marathon. It’s allowing me to live a somewhat normal life and it has done for seven years now without any major complications.”

With no issues up until this point obtaining her treatment from the pharmacy, Veronica was taken aback at events that occurred last week.

“I ordered my latest RoActemra prescription last Tuesday, went to collect it on Saturday and was told ‘sorry we’re actually out of stock, all consultants are aware’ and was left in a state of shock myself,” she explains.

“That treatment has been keeping me alive for five years now and I wasn’t even made aware that stocks were running low.”

Veronica immediately chased the issue up with her consultant, rang the emergency line in Waterford and managed to obtain an emergency infusion.

“That infusion gave me some peace of mind but I’ve been informed that I won’t be able to avail of further treatment for six weeks.”

Veronica states that it is important that the patients affected, many of whom that are elderly, contact their consultants for clarity.

A statement from the drug’s manufacturer Roche Ltd. states that “during the pandemic, the demand for RoActemra has been increasing at a global level. ”

It continues, “there is not enough supply of the subcutaneous formulations of RoActemra to meet the increasing demand between July and December 2021.”

The Health Products Regulatory Authority are not expecting new stock to arrive in Ireland until September.

Veronica is calling for official clarity on the current stock of RoActemra available and seeks reassurance that those who most need it most, which she states extends far beyond herself, can continue to avail of the treatment.

“I know that there are Covid-19 patients who are in life or death scenarios that really need RoActemra too and I want to make sure that that’s noted and respected. The issue I have relates to how a global shortage of such a life-changing drug was allowed to happen.”

For Veronica, who has to live life day-by-day, especially now, the silence around the shortage of RoActemra is deafening.

PUP will be reduced on a tapered basis - details below

"The Reburial of Jackie Brett" is by local storyteller Kevin Hughes