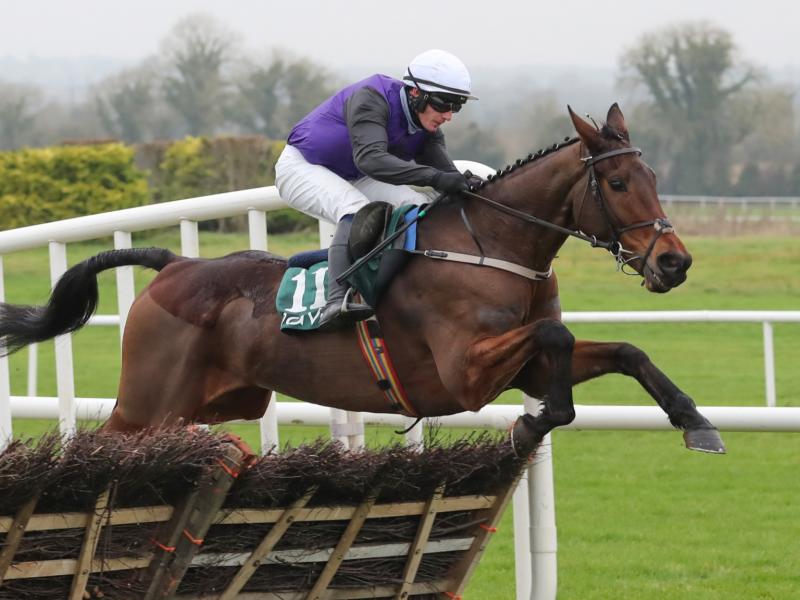 Joseph O'Brien shared a couple of winners with Declan McDonogh at Dundalk on Wednesday. The pair won the 12-furlong maiden with first-timer White Marlin which just got the better of the Michael Halford-trained Elzaamsan in the colours of owner/breeder Morna McDowall.

The well-supported 6/1 chance scored by a head from the Ronan Whelan-ridden 13/8 joint-favourite. In Ecstasy had a little more to spare as he won the eight-furlong conditions’ race for owners White Birch Farm.

The 2/1 chance came between horses well inside the final furlong to record his second success at the expense of the Michael O'Callaghan-trained Rene Artois and Ger Lyons’ 15/8 favourite Knocklane Lass. Mikey Sheehy took the second leg of the eight-furlong handicap, the night’s finale, on the Raymond Moore-owned Indiana Grey. Trained by Pat Martin, the 17/2 chance skipped a few lengths clear before the furlong pole to beat Matthew Smith’s Kudbegood by a length and a half.

Willie Mullins landed a treble at Naas on Thursday when winning two maiden hurdles and the beginners’ chase on the card. Mark Walsh suffered an injured wrist while schooling and missed out on two winners, with Paul Townend stepping in to take the opening maiden hurdle on the JP McManus-owned French import Hawai Game. The strong 8/11 favourite impressed with an all-the-way three and a quarter-length win over the Paul Nolan-trained Daily Present.

Townend was also successful on the Mullins-trained Brandy Love which ran out a very taking 10-length winner of the mares’ maiden hurdle. An uneasy 4/5 favourite, she too made a winning start to her jumping career when leading from the opening hurdle to win from Gavin Cromwell’s Limerick Lace. Jody McGarvey stepped in to replace the unfortunate Mark Walsh as 4/1 chance Capodanno took the two-mile three-furlong beginners’ chase to complete the champion trainer’s treble.

The five-year-old recovered from an almighty blunder at the second last fence to win by a length and a quarter from Henry de Bromhead’s Embrun Mitja with the Mullins-trained Gaillard Du Mesnil, the Paul Townend-ridden 4/11 favourite, three-parts of a length away in third place.

Joseph O'Brien enjoyed his first winner of the weekend when 7/1 chance Almanera won the seven-furlong maiden at Dundalk on Friday evening. The two-year-old came out on top in a barrier trial at the track in June and scored again when getting the better of the Gavin Cromwell-trained 5/6 favourite Together Aclaim by half a length under Mikey Sheehy.

The winning rider’s brother Danny was also a winner on the card when taking the eight-furlong maiden on the John Cahill-trained Prince Of Peace. A strong 100/30 chance in the colours of Daniel McLoughlin, the three-year-old made most of the running to score by a length and a half from Jessica Harrington’s Giuliana and Sheehy commented, “He deserves that. He tends to dwell in the stalls a bit but we were drawn one today and he got the run of the race. I made up his mind early and I’m delighted for the connections. It’s great to get a winner for them.”

Willie Mullins suffered a couple of early reversals with beaten favourites Deploy The Getaway and Belle Metal, but he ultimately shared a Saturday double with Paul Townend.

Minella Cocooner, the 30/100 favourite, easily won the two and a half-mile maiden hurdle, the five-year-old was hardly off the bridle as he beat the Shane O'Brien-trained My Design by six and a half lengths in the colours of David Bobbett. The champion jockey had a little more to do on 6/5 favourite Ciel De Neige but in the end the six-year-old ran out a cosy winner of the rated novice chase for owner JP McManus.

Mullins was quickly into his stride at Thurles on Sunday where he won the opening beginners’ chase with the Tony Bloom-owned Stratum. It was the first of two winners for the champion trainer at the meeting and the race saw him land a 1-2 with the Paul Townend-ridden 2/5 favourite getting home a length to the good over stable companion Cavallino.

Jody Townend completed the Mullins brace when winning the second division of the mares’ bumper on the newcomer Eabha Grace. A 5/6 favourite in the colours of the John Battersby Racing Syndicate, the four-year-old eased clear from the furlong marker to win by six and a half-lengths from the Gordon Elliott-trained Scarlet Witch.

Joseph O'Brien won the listed mares’ novice hurdle with the brilliantly consistent Lunar Display. A third jumping success for the five-year-old, she recovered from a bad stumble at the penultimate flight and had plenty in hand as she beat Declan Queally’s The Getaway Star at odds of 5/2.