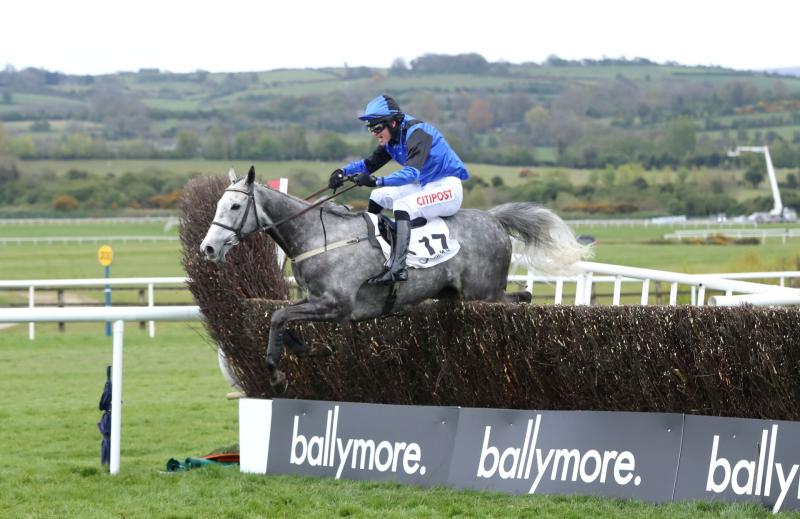 Mister Fogpatches will be going for glory in the Thyestes Chase at Gowran Picture: Niall Carson/PA

Pat Fahy believes the ground is key to the chances of Mister Fogpatches in the Goffs Thyestes Chase at Gowran Park on Thursday.
Third in the Scottish Grand National before winning at Punchestown last spring, so far this term the grey has been placed in the Troytown at Navan, the Cork National and most recently at Cheltenham.
With just 10st on his back, less jockey Richie Deegan’s 3lb claim, Mister Fogpatches has plenty going for him in Thursday’s €100,000 feature and Fahy is hoping conditions continue to dry out.
He said: “The weather is very much in his favour, so I’m hoping we’ll get the ground.
“Richie knows him, has lots of experience and is taking the 3lb off. He did nothing wrong on him in the Troytown, so hopefully everything will go well.
“The horse has loads of experience now and he has a lovely weight on his back.
“It’s a lovely, galloping track and it’s a nice opportunity for him – as long as he gets the ground.”
Based locally at Leighlinbridge, Fahy would love to add his name to the roll of honour in the Gowran Park showpiece – but is keeping his feet on the ground.
“It would be great, I suppose. To win it, I think we’d realise the importance of it afterwards,” the trainer added.
“At the moment we’ll keep things on an even keel and get there and see how we get on.
“He’s got a great advantage with that weight and we’ll pray for the ground – that’s really what it’s all about as far as I’m concerned.”
Gordon Elliott’s Escaria Ten is a contender who would appreciate rain as he makes his seasonal debut in the contest under Adrian Heskin.
The eight-year-old was last seen pulling up in the Irish National in April, the final run of a campaign that peaked with a third place in the Grade Two National Hunt Novices’ Chase at the Cheltenham Festival.
“He’s in good form, Gordon seems happy with him,” said Iain Turner, racing manager to owners the McNeill Family.
“We could have done with softer, typical Gowran ground as he goes well in soft or heavy ground.
“The lack of rain probably isn’t ideal but it is his first race of the season and it’s a nice starting point.
“It’s his first time out since the Irish National last year, which probably came a bit soon after the National Hunt Chase. It’s good to get him started with targets in mind later in the spring.”
The most prominent amongst those targets is the Grand National at Aintree in April, though on the likelihood of his participation connections will take a lead from Elliott, who has trained the winner of the race on three occasions.
“We’d love him to be a Grand National horse, that would be a dream,” said Turner.
“He jumps well, he stays well and he’s had a light campaign.
“Gordon has trained more Grand National winners than we’ve had runners so he knows a little bit more about it than we do!”
Escaria Ten is one of five Elliott runners in the race, with Braeside the most-fancied at present and last season’s winner Coko Beach set to defend his title.
Death Duty and Smoking Gun also line up, with Defi Bleu a reserve runner for Elliott.
Willie Mullins also well represented in the race with Franco De Port, Ontheropes, Agusta Gold, Class Conti and Brahma Bull. Stones And Roses is a reserve for the race.
Martin Brassil’s Longhouse Poet and the Noel Meade-trained Diol Ker are other notable contenders.