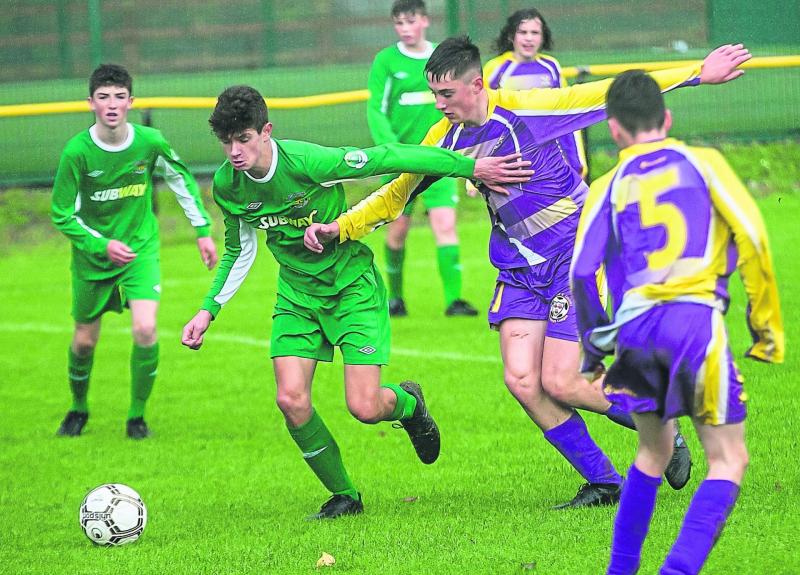 Kilkenny student Mikey Raggett will be hoping he can help teach Scotland a lesson when the Republic of Ireland schools team take on their Celtic cousins on St Patrick's Day.
Raggett, a student at St Kieran's College, is part of an 18-man squad named by new Republic of Ireland Schools head coach John McShane for the opening match of their 2022 inspiresport Centenary Shield campaign against Scotland at Home Farm FC on March 17.
The St Patrick’s Day encounter will ensure the festivities in the capital last that little bit longer as proceedings kick off at 7pm in the Whitehall venue.
Following the FAI Schools Interprovincial Tournament last December, McShane and his management staff whittled down the 64 players that starred in that event to nearly 30 players for his initial trial. Over the course of the next three months, they cut the training squad accordingly with a number of students on standby, should their services be required over the campaign.
The Republic of Ireland Schools last won the Shield in 2018 when William O’Connor made his management debut. The Shield makes a welcome return following a two year absence due to the Covid-19 pandemic.
Last week saw the first of 10 games streamed on the BBC iplayer (red button) as Scotland took on long serving Champions Northern Ireland who were crowned back in April 2019. The game served up five spectacular goals with Scotland edging out Frankie Wilson’s Northern Ireland scholars.
Following the Scotland game the Republic of Ireland team travel to Maginn Park in Buncrana when they take on their Northern counterparts.
The third outing will see the Republic of Ireland feature in Eastleigh FC as England host on April 8 while the Irish’s campaign will conclude in Caernarfon FC on April 21 with the conclusion of the 2022 series.
Raggett, who won Wexford FC's Player of the Year in 2020, is now playing for Shamrock Rovers in the under-19 National League. He made a great start to the new season, scoring in Rovers' 3-1 win over Drogheda United on the opening day of the season.
Republic of Ireland: Eanna Clancy (St Clare’s Comprehensive School, Manorhamilton), Steven Healy (Calasanctius College, Oranmore), John O’Donovan (Clonakilty Community College), Leon Ayinde (Coláiste an Spioraid Naoimh, Cork), Alex Healy Byrne (Glanmire Community College), Charlie O’Brien (Pobalscoil na Trionóide, Youghal), Zach Dunne (Presentation Brothers College, Cork), Oisín Coleman (St Mary’s Diocesan School), Michael Raggett (St Kieran’s College, Kilkenny), Michael Keyes (Malahide Community School), Tadhg Walsh (St Joseph’s CBS, Fairview), Michael McCullagh and David Tarmey (both Coláiste Bhaile Chláir), Kieran Cruise and Lennon Gill (both St Benildus College, Stillorgan), Darragh Reilly (St Gerald’s College, Castlebar), Reece Byrne (Oatlands College), Jack Ross (Presentation College Bray).