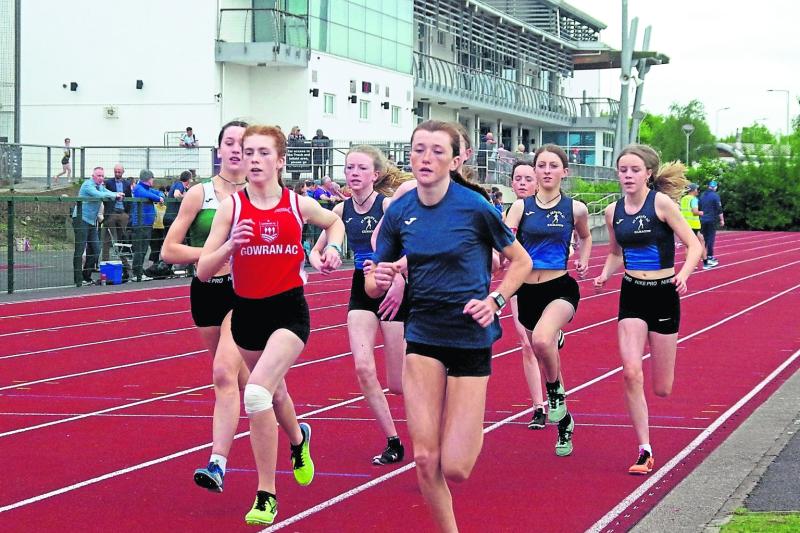 From the Mary Peters track in Belfast, to Wichita, Kansas and back home here in Kilkenny, there were county athletes claiming victories and personal bests all over the country and world.

This is the season, where track athletes travel to get the results they want. At the moment there is an abundance of races for athletes to choose from - and plenty more to take in on the world stage with the Diamond League taking place across the world.

Kilkenny was the venue for the county track and field championships. A few weeks later than normal, but equally enthusiastic.

With mother nature taking care to keep the weather in control, the day went off without any glitch. Athletes from North and South came together to contest a plethora of events, all testing their ability in advance of choosing events for the forthcoming Leinster Championships.

In the race for the best overall club, Kilkenny City Harriers (KCH) have forged their way into the winning pathway with a massive lead of 222 points to Gowran’s 87.

Gowran took the majority of their points from the throwing events, where the achieved a whopping 50 points. In third place is St Senan’s AC with a score of 63 - they were missing their usual representation in the discus and hammer events.

Thomastown are in fourth place with 23 points. Brow Rangers, who had plenty of representation in the hammer and discus, are in fifth – tying with St Joseph’s.

KCH continued their dominance at the track and field, enjoying total podium spots in some of the sprints and relays. In the girls’ under-11 and 13, they had a clean sweep, taking all podium places in both relays. Brow Rangers and Gowran had similar positions in the hammer and discus with Gowran doing very well in the field events, specifically the hammer and discus.

While everyone tried their best and there were some amazing results right throughout the fields, a few individuals deserve a mention.

Top of the list is Eve Dunphy (St Senan’s) who dominated the girls’ under-16 category across multiple events. Winning the 250m hurdles, 800m, long jump, walk and finishing second in the 200m, along with being the final leg on the St Senan’s winning under-17 relay team, her grand haul of five gold and one silver required some assistance to carry home.

Alex Cullen (KCH) had a somewhat similar fortunes as he dominated the boys’ under-17 events, winning the hurdles, high jump, 100m and 400m as well as being on the under-17 KCH winning relay team. His haul of five golds was an impressive reward for a day’s work.

The Daly sisters Molly and Ellen (KCH) secured three gold medals, with Molly doing a 200m and 250m hurdles double. Daire Casey-Power (St Senan’s) also secured a double in the under-15 100m and 400m, where he was a clear winner in both.

The men’s 1500m produced an exciting finish as long time leader James Kelly (Castlecomer) had a substantial lead for most of the race, only to be reeled in, on the final lap by Eamonn O’Connor (KCH) - the KCH man pipped the ’Comer man at the line.

In the 400m Jack Manning (KCH) competed in the men’s 400m. Starting in lane seven, it was somewhat a solo run for Jack and he had to lead from the front and make his own running, until the other athletes started to come into view as the rounded the final bend. He finished sixth in the A race in a time of 49.01.

The 1,500m attracted five athletes from the county between the women’s and men’s events.

Caoimhe Phelan (St Senan’s) was the sole female competitor from the county. Having missed the entire cross-country season due to surgery, the St Senan’s athlete slowly built up her training and was thrilled when carefully planned training resulted in her excellent time of 3.52.

In the men’s races, David Williams (St Senan’s) was less than one second outside of the under-18 European qualifying time for the 1,500m when he ran 3.57.

Williams, who was perhaps mis-seeded in his race, outpaced the pacer after 150m to form a five metre gap between himself and the rest of the field. The 17-year-old Kilmacow runner was joined by senior athlete Patrick Noonan (Craughwell) with one lap to go.

Both athletes battled hard with Noonan gaining a 2m advantage with 100m to go. Williams fought back and drew level but, in the end the strength and experience of the older Craughwell man saw him cross the line just two-hundredths of a second ahead of the Kilmacow man.

Gearoid Long (St Senan’s) had a massive PB when he clocked 4.04 in Race D to storm past Newry’s Jimmy Slone in the home straight to finish strongly and cross the line in first place.

The final Kilkenny athlete to compete was Ronan O’Donovan (St Senan’s). Ronan returned to athletics last year after a 23-year hiatus. The former Leevale athlete was, in his juvenile days, a national 800m champion. Last weekend, as a masters over-40 athlete, he had a new PB in his second career in athletics with a time of 2.06.

In the men’s conference teams from Wichita State, Tulsa, Memphis, East Carolina, Tulane, Cincinnati, South Florida and Houston competed for places in the next stage of the American Outdoor Track and Field Championships.