It had to end some time - but for Kilkenny, it will never be the same again

Brian Cody's heart and soul is in this Kilkenny community 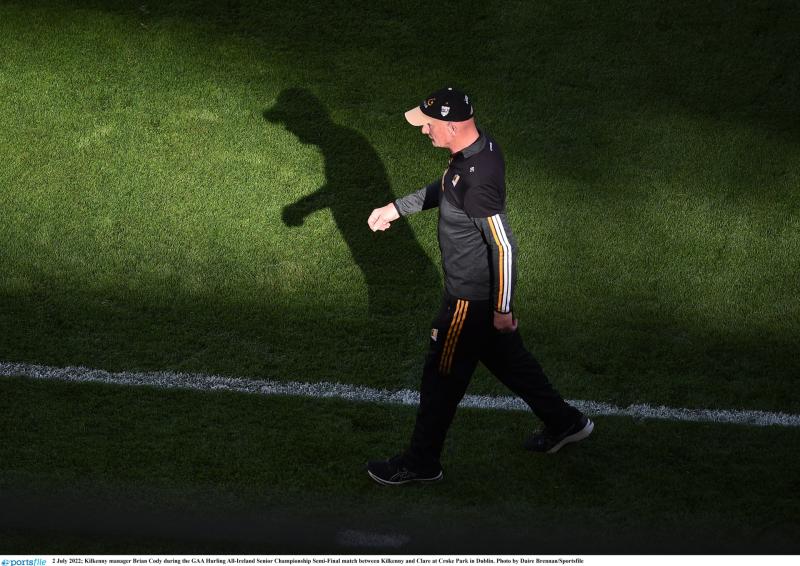 It had to end some time. Brian Cody’s term as manager came days after the All-Ireland final.

Funny that his first All-Ireland at senior level for Kilkenny was against Limerick. His last as manager also. When  you consider the great rivalry he had with Cork on and off the field, and how he really kept his heel on Tipperary’s ambitions as manager over the last 24 years, you would not have expected that opposition to book end what was the greatest career the GAA has ever witnessed.

Limerick didn’t end Cody’s reign. The man himself did. As he said himself, he took the job by choice, gave endless hours to the game by choice and would now leave by his own choice.

Twenty four glorious years on the sideline. His presence loomed large over the hurling world. An inspiration for our warriors on the field. A bad omen for the opposition. Brian Cody stood defiant in defence of his players and their efforts. He demanded 100%, and got it.

Some say the best is always yet to come, but for Kilkenny fans it will never be the same again.

Brian Cody  defined the Black and Amber, and in doing so, has set out a template for others to follow - on and off the field. It would always be his intention to leave Kilkenny in a better place. Big picture wise, eleven All-Ireland titles, ten NHLs certainly does that. And last Sunday, on the strength of this year’s Leinster winning campaign, another set of talented young hurlers coming through.

Brian Cody’s playing philosophy was honest and straightforward, his management insisted on high standards to wear the Black and Amber and representing Kilkenny is an aspiration for so many. A number of the present panel were not even born when Brian Cody was manager. They know nothing but Brian Cody on the Kilkenny sideline.

We turned into a new Millennium with Brian Cody; we stared down Troika and Bank bailouts with a four in a row; we watched as he shaped and reshaped teams to get the very best out  of the most talented hurlers ever to grace Croke Park. He pushed the limits of the game, bringing the best out in our players, and ultimately the opposition. There were classics. And there were disappointments. Kilkenny under Cody was gracious in victory, and magnanimous in defeat.

There is no doubt those gifted hurlers would have won All-Irelands. But to get the very best out of them took Brian Cody. To ensure the drive was there to come back, year after year and to send a Kilkenny team out to battle to the very end, that was Brian Cody.

Apart from hurling knowledge, leadership, management skills and a burning desire to succeed, there are other aspects to the Cody era that should be pointed out. It seemed more than obvious that Brian Cody believed in the Kilkenny hurling tradition. Kilkenny hurling was the pinnacle, and the club player who came on the cusp of inter county standard was more skillful than any other club player in a similar position in other counties.

And then of course the GAA ethos, to the very core. For the love of the game, truly.

Brian Cody was appointed Kilkenny manager in the winter of ‘98. We had just lost the All-Ireland to Offaly. It was a decade of disruption. Kilkenny and Cork had the better of the early part but along came Offaly, Clare and Wexford to stir things up and take All-Irelands - with Limerick and Waterford involved in some truly classic encounters. Brian Cody, that November became Kilkenny’s fifth manager of the nineties as on the home front, stoked up by losing the ‘98 final to Offaly courtesy of one of their special comebacks through the backdoor, there was also disruption.

Brian Cody cast his net, gave chances and debuts and moulded a strong team full of goals, and Kilkenny returned to the All-Ireland final but lost to Cork in a tight encounter leaving Kilkenny facing in to the 2000 decider hoping to avoid an unwanted record - losing three consecutive finals. They won, Willie O’Connor lifted McCarthy, and the Cody era took off.

All-Irelands followed in ‘02 and ‘03 as the rivalry with Cork intensified and there were some great games, not just in the championship but the NHL.

But the real rivalry over the years was Tipperary. Kilkenny suffered at the hands of Tipperary for many years. The Premier had gone off the radar for most of the Seventies and Eighties. But it’s fair to say that Kilkenny brought it to a new level for Tipperary. Sure they ended the drive for five, but between 2006 and 2016, Kilkenny missed out on only one All-Ireland final day and the team that brought the best out in Kilkenny was Tipperary.

Brian Cody was the Kilkenny full back of my youth. Over a few years in the early eighties, it seemed like full back was the key position and you had some legends of the game - like Eugene Coughlan in Offaly, Conor Hayes in Galway and of course Brian Cody.

For me, Cody stood above them all. He silenced Ray Cummins in 1982, and had Cummins chasing him the length of the Hogan Stand on a memorable solo before leaving all of Cork behind and lifting the McCarthy Cup. And Kilkenny for me, without Cody, was not the same. When the Black and Amber were going for the treble in 1984, there was no Cody on the edge of the square when Tony Doran rose highest in injury time, and knocked Kilkenny out. First time I ever realised how dangerous a two point lead was….

Brian Cody as a young hurler was  one of the most gifted Kilkenny ever produced. His ability in the air at centre back for St Kieran’s and the Kilkenny minors was just awe inspiring for his fellow, young team mates. And apart from all the skills at a young age, he was a born leader.

His inter county playing career has all the silverware, from colleges, to under age to Leinster and All-Irelands and All Stars. He won it all. And of course he was a key member of one of the greatest club teams of all time - James Stephens in the '70s and '80s.

Two All-Ireland club titles made The Village hurlers household names everywhere. There were some epic clashes on the local front - notably with the Fenians and going to Nowlan Park for those games, seeing the late great Chunky O’Brien cover ground effortlessly with the ball doing his bidding was just mind blowing.

Brian Cody, his place as a Kilkenny hurler, was always right up there with the greats - a winning captain, an All-Star, a player who had achieved so much for club and county and delivered on incredible underage promise. Not being there in 1984 signalled an injury run which ultimately ended his career.

As a young hurler many would have earmarked him as a leader of the Black and Amber. And as an outstanding player, versatile,  keen reader of the game, he would always be a success as a manager.

But we could never imagine just how successful.

His place in hurling is set in stone. For future hurling generations, Brian Cody will be the inspiration and the measure.  When any great dynasty ends, there is always uncertainty and sport can be no different.

Take Alex Ferguson and Man United. Nobody knows the future, but what is sure is that the Cody template for preparing and playing the game is very much in Kilkenny’s hurling DNA. And it’s ineveitable that the next manager will be a former player of Brian Cody.

His sporting prowess and records will be lauded and rightly so over the coming weeks. But it’s also worth recalling how Brian Cody never turned a good cause down, represented Kilkenny whatever was asked of him at various functions and events. He worked for charities, for his club, his former schools.

His heart and soul is in this Kilkenny community. And his place in our community is everlasting, a legacy that will stand any test through time.