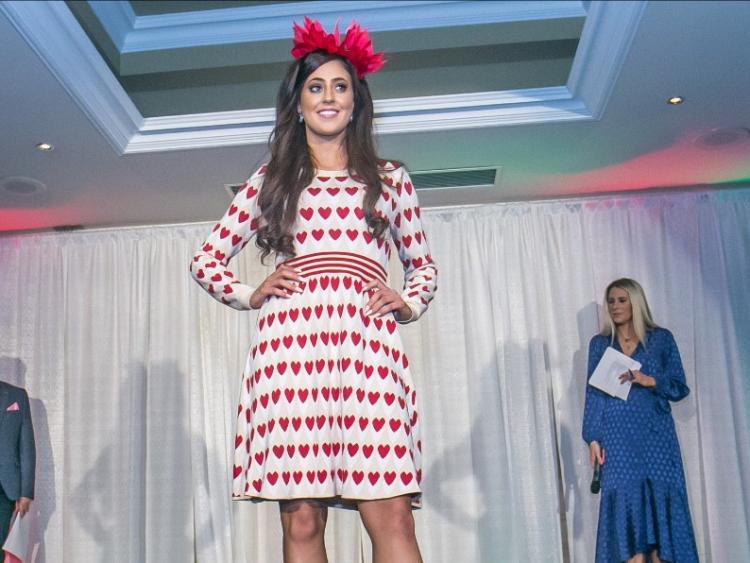 Miss Kilkenny Eimear Fennelly modelling at the Love of the Village in the Newpark Hotel PICTURE: PAT MOORE

Community spirit and stylish fashion proved to be a winning combination at the novel fundraiser For the Love of the Village at the Newpark Hotel.
The models did a superb job in entertaining the packed room as they strutted down the catwalk in the latest looks of the season.
It was very much a community-orientated event and there were many local personalities who participated and supported the show which will benefit the local GAA club.
Hurling legend Jackie Tyrrell said that the fundraiser was a ‘great success.’
“The support was brilliant, we were happy out how all the local community came out in force to help in any way they could. It was a real Village effort,” he said.
“There were so many well-known faces who got behind the event and drove it on and helped make it the huge success that it was. People like Eoin Larkin, Matthew Ruth, Tony Scanlon. Dan Cody, Joe Hennessey and Patrick Neary.
“Some of the players’ mothers were fantastic and modelled for us and deserve a special mention. They are Lucy Larkin (mother of Eoin Larkin), Angela Downey Browne (mother of Conor Browne) and Mary McGrath (mother of Jack McGrath),” added Jackie Tyrrell.
Miss Kilkenny Eimear Fennelly also wowed the audience with her modelling prowess.
The male models were decked out in a stunning range of Spring/Summer looks from Littlewoods while the ladies were dressed from a number of local boutiques and stores including Lady Lorna’s Emporium, Hennessy Sports, Wallis and Dorthy Perkins.
Sports broadcasters Evanne Ni Chuilinn and Marty Morrissey were MCs on the night and celebrity chef Edward Hayden was a rather amusing host of Blind Date. All funds raised will go towards further developing facilities at the club.
“We will use the proceeds to develop facilities including toilets and a kitchenette. I want to thank everyone for getting behind the fundraiser in being part of this great event. It really was an evening to remember,” added Mr Tyrrell.