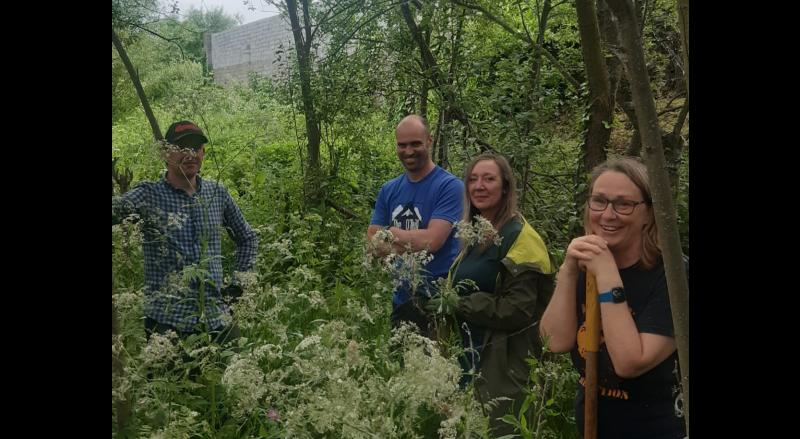 Hard-working volunteers have completed trojan work to restore the ecological status of the River Bregagh which flows through the medieval centre of Kilkenny City.
In a positive development Keep Kilkenny Beautiful have welcomed the intervention of the Local Authority Waters Programme (LAWPRO) to assist in the restoration of the River Bregagh.
The local Tidy Towns group, along with local fishing club Kilkenny Anglers completed an environmental survey of the Bregagh in 2013 which resulted in an ecological report being produced with recommendations for the water authorities and the tidy towns to implement. The aim was to restore good ecological status to the River Bregagh.
KKB took on board the recommendations and have since removed the tonnes of industrial, construction, agricultural and domestic rubbish identified in the report. An invasive species management programme has been implemented with Himalayan Balsam being largely eradicated. Using Citizen Science KKB Volunteers now monitor water quality in the stream and all surveys to date have shown that the water is polluted and aquatic life is compromised.
KKB have undertaken educational workshops with Kilkenny CBS Green School Committee. Students have also recently been involved in small stream water quality and invasive species monitoring on their local river.
In the most recent Chief Executives report presented to members of Kilkenny County Council, it was announced that LAWPRO have deployed a river scientist to investigate the many sources of emissions that continue to threaten this wonderful salmonid stream in the middle of the city.
The tidy towns volunteers have stepped up to the plate and have done everything that can be done to restore good ecological status, completing an environmental survey, commissioning an ecological report and implementing all its recommendations.
Cllr Maria Dollard of the Green Party praised the KKB volunteers for setting the standard by which all local groups can take on the care of their water bodies and work proactively to restore our rivers to good ecological status and help reverse the alarming downwards trend reported to members at the October Council meeting. “KKB deserve great credit for demonstrating the drive and vision to show what volunteers and citizen scientists can do to save our rivers. It is now up to the Local Authorities Waters Programme Office (LAWPRO) to play their part, identify and stop the polluters so this beloved stream can be restored to good health for the benefit of everyone”