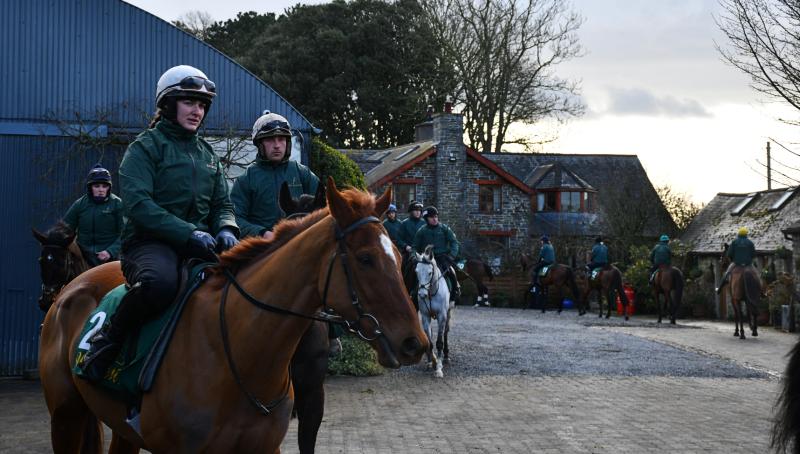 Jockeys get ready for the morning rideout at Willie Mullins' yard

It was an honour to be invited to Willie Mullins yard, the greatest trainer of our time, ahead of the 2022 Cheltenham Festival.
The stable tour was organised by The Jockey Club, and the Kilkenny People team were on site for all the action as the champion trainer set to field a formidable team at The Festival once again.
Speaking at the media stable visit Willie Mullins, who has enjoyed 78 Festival winners, revealed that he could have up to three runners in the Grade One Boodles Cheltenham Gold Cup this year on Friday, March 18.
Here is a glimpse of Willie Mullins’ operation ahead of this year’s Festival…
Jackie Mullins – behind every great man is an even better woman!
Following a wind-swept morning on the gallops, Willie and his wife Jackie very kindly opened their home to us all. The press lined up to interview Jackie, with every single one of them asking her – ‘how do you keep things calm in the lead up to the festival?’
What I really wanted to know was how real was the sense of calm in the yard that morning.
“If you had seen us before everyone arrived it wasn’t,” she laughed. “ With less than three weeks to go, the sooner the festival comes the better. Fewer things go wrong from here on once we start putting the finishing touches on.”
When I asked if she thought the Irish contingent was going to do as well again this year, she said: “We have a great hand, but the gods have to be with you. I am sure the English will come back with a great reply – may the best man win!”
Everyone wants to know who son Patrick will saddle in this year’s bumper but, naturally, Jackie played her cards close to her chest.
“I imagine Facile Vega,” she said, “but there are a few possibilities still at this stage.”
Grainne Whelan, Racing Secretary
Grainne left a career as a qualified pharmacist to work with Willie Mullins. The Laois lady has no regrets, as she has been running a busy operation for the past year.
“It’s very busy for the month leading up to Cheltenham,” she said. “We have about 60 horses going over to The Festival, so as you can imagine there’s a lot of logistics involved.”
Brexit hasn’t made life easy for Grainne with the mountains of paperwork involved for each animal.
“There’s a lot of extra paperwork involved with Brexit, to send horses over and then for them to come back home,” she said. “It’s like a temporary export.”
Grainne is preparing nine lorry-loads of horses to leave Willie Mullins’ yard over a period of three days.
“When they arrive, the thoroughbreds will get a day’s rest, followed by a couple of days of light exercise before the race day.”
Charlie Mullins, Jockey
One to watch is young Charlie Mullins, son of Tom and Helen Mullins and the youngest rider in the Mullins dynasty. He also took to the gallops on his uncle’s champion horses on the day of the stable tour.
Speaking to Charlie afterwards, he admitted how much he is looking forward to the festival. 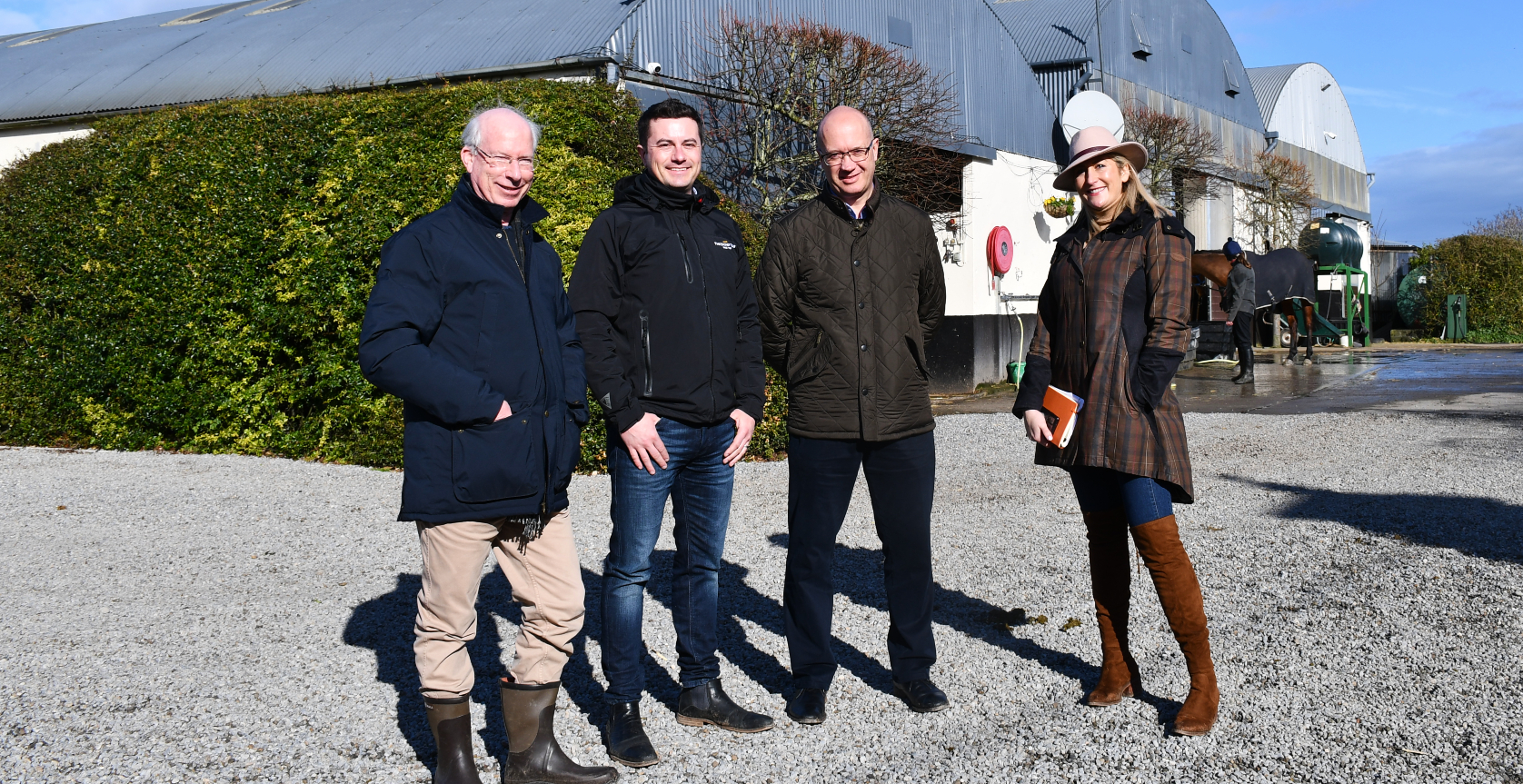 “Willie has a great bunch going over to Cheltenham, as do a few more of the Mullins’,” he said.
As well as the Cheltenham Festival this year, Charlie said he is looking forward to also attending Aintree for his father’s runner. Who knows, this young man could bag a Grand National some day, just like his big brother David.
Patrick Mullins had to rush off early from the stable tour to the Punchestown Races where the press had a chance to talk to him and his cousin Danny.
Patrick Mullins
Willie’s son Patrick missed last year’s Festival, as he was unable to travel over at the time because of his status as an amateur jockey.
Patrick has made up for lost time since returning to the saddle, racking up no less than four Grade One victories for his father. He reported the yard to be in fine fettle ahead of this year’s Festival.
“The Dublin Racing Festival went really well, and it provides a nice break before Cheltenham,” he said.
“The horses have come out of their races well and we’ve given them an easy time and we’ll start pressing some buttons now.
“It wasn’t easy last year but none of my potential rides won as it turned out – there were three seconds – which made things a bit easier to watch!
“I’ve got there a stride too late on Melon and a stride too early on Wicklow Brave so it would be nice to get one against the pros but one against the amateurs would be fine too to be honest.”
One race which is always worth watching is the Grade One Wetherbys Champion Bumper, which Patrick has won twice (Cousin Vinny in 2008 and Champagne Fever in 2012).
It is a race in which his father has an outstanding record, winning it on no less than 11 occasions. There is a particularly strong Irish contingent heading over the Irish Sea for that race once again.
That contingent includes the current odds-on favourite Facile Vega, who is a son of six-time Cheltenham Festival winner Quevega. He recorded a deeply impressive victory in Grade Two company at Leopardstown earlier this month.
Mullins was on board for that success and has first preference of his father’s string, though he stressed that such a choice may not be as easy as it first seems.
“Facile Vega obviously has the best track form but Redemption Day mirrors everything he does at home, and I think James’s Gate has a lot of improvement in him so there are plenty of good spares there,” he said.
When asked about how the family handles the pressure of big festivals, he added: “The Lord Bagenal is definitely a huge help,” he said with a laugh. “We’re all very thankful that it’s back open!
“My father has been at that pinnacle now for a few years and I think my mother is very good at humouring him. We know when to walk out of the kitchen and when to be in the kitchen, so we’ve all adapted well I think.”
Danny Mullins
Also heading over the Irish Sea is Patrick’s cousin Danny Mullins, (son of Willie’s younger brother Tony Mullins) who is also enjoying a fine season in the saddle.
The 29-year-old has won three races at the top level so far this term, including the Ladbrokes King George VI Chase at Kempton Park on Tornado Flyer.
And he revealed that he is itching to get to Prestbury Park.
“Going to Cheltenham is always exciting,” he said. “I think this year I’ve probably got a few more rides pencilled in. Normally it would be the case of waiting to see what I can pick up, but this year I’ve got a few already and hopefully I can pick up a few more when I go over.
“I’ve had a good few months and I just suppose I’m very lucky to be riding all those good horses,” he added. “The harder I work, the luckier I get.
“There will be no conversations about rides, we turn up and work and Willie makes the decisions – that’s how it works! Hopefully there will be a few nice ones to get my leg across, but we’ll see closer to the time.”
May the luck of the Irish be with the Mullins contingent over St Patrick’s weekend. My money is on another incredible Festival for the Irish.
You can watch Siobhan Donohoe’s interviews on our website, www.kilkennypeople.ie