Queens return to rule the Set Theatre in Kilkenny 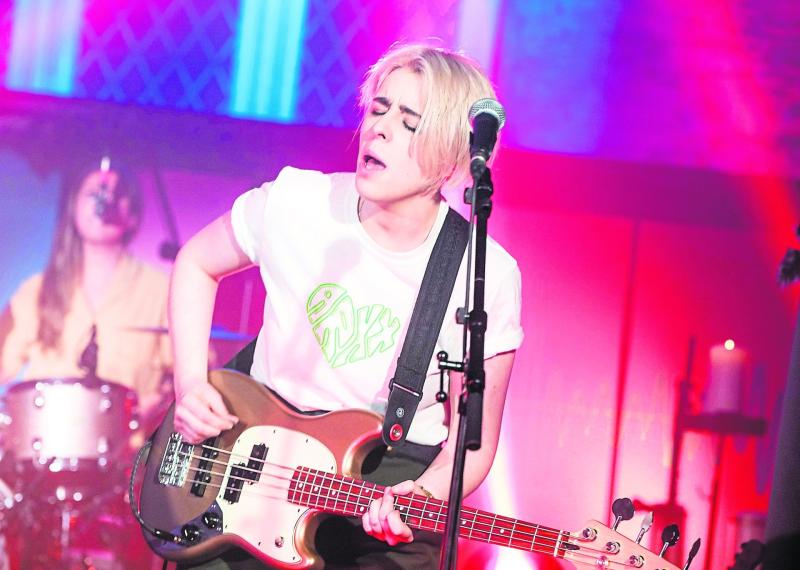 Pillow Queens came to Kilkenny to fulfil a previously postponed gig. Thanks to a good friend and a change in both of our plans, I managed to get along.
I’ve been a fan of their work for some time and have played each of their releases in the past number of years. I’d enjoyed their early release State of the State, their first album In Waiting and am really looking forward to their upcoming album Leave the Light On, due to release on April 1.
The Set is open for business, smiling faces, the giddy expectation hanging in the air. An appreciative audience enjoy the support act Banríon, everyone willing them in the fate of the support act. Jangly and crunchy, they’re a band to watch and enjoy.
Pillow Queens arrive on stage to massive grins and shouts. Nerves are admitted to but not at all in evidence. They’re giddy, grinning from ear to ear, certainly, but once they start to play it’s business. No need for any anxiety of any description. They hit the stage and then hit us.
The collective vibe in the room is recognised and a shout out loud to the support act early is evidence of this. Banter emerges slowly as the room warms up. They’re getting off on the giddy, as indeed we all are. By the end, they don’t want to sort, and neither do we.
To mangle a metaphor, they lay their music on a bed of elemental joy. Their sound is full, textured, each member having their own space.
The one thing you notice is their ‘band-ness’ - each stepping up, in and out of a vocal or a harmony, instruments swapped without a missed beat. Those harmonies are seamless and they consistently reach the roof; full throated and tasteful as needed. The arrangements are just what they need to be.
They pace their set well, lace it with the roof scrapers, grace it with fan favourites. Some songs, including a brand new one, have harmony vocals that lock together as almost one voice if that’s possible.
Lyrically, they can break your heart and make it beat faster, often at the same time, and there’s plenty for the feet and limbs too. They manage to get angry and even…
They have the songs and the chops to match. Like many of the really great bands, they make it look easy but that belies hard graft and craft. Their albums are well produced and show their abilities. Live, they prove it with every song. This is a group with their act together, literally and musically.
And yes. clichés apply: they’re going places; they’re going to be even more huge. With the new normal, it means that they will finally head to the USA…lucky for them and for the USA: their American audiences will get to hear them for the ‘first’ time.
Check out the back catalogue and buy their new album! More great things coming to the Set Theatre too!