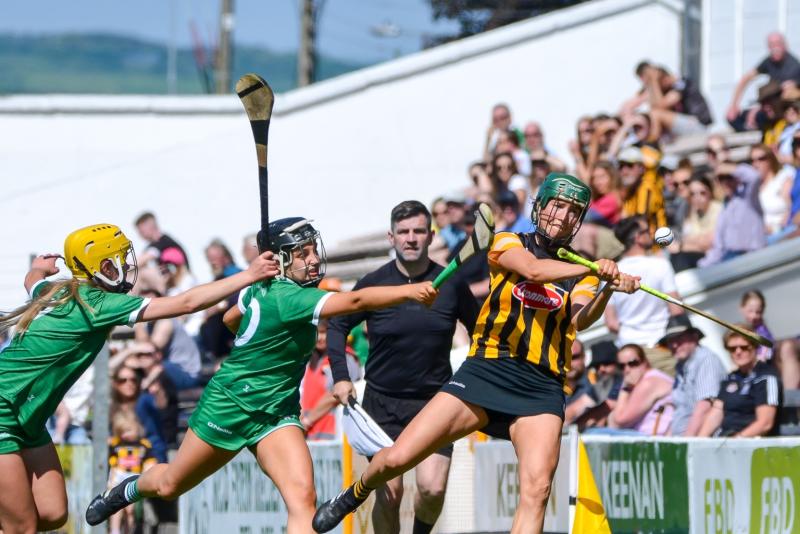 Kilkenny’s Denise Gaule in action during the Round Two victory over Limerick in UPMC Nowlan Park. Picture: Billy Culleton

Kilkenny may have won all three of their games in the Glen Dimplex All-Ireland senior camogie championship to date but they are still somewhat under the radar in the grand scheme of things.

The other group includes the likes of Cork, Tipperary, Waterford and Dublin. While the Rebels have already assured themselves of a place in the All-Ireland semi-finals, the other three counties are all still competing for places in the quarter-finals.

Kilkenny’s group looks a bit different with two games to play as they and Galway have cruised to victories in all three contests so far - the two rivals have already advanced to the knockout stages as a result. Their round five clash on Saturday week will effectively determine who advances to the semi-finals in Croke Park and who must make do with a Semple Stadium quarter-final date.

After failing to qualify for the National League final earlier in the year, Brian Dowling’s Kilkenny side are somewhat out of mind and out of sight.

Kilkenny may have defeated Galway in the Covid-restricted 2020 All-Ireland senior final, but the teams have gone in different directions ever since, with Galway winning the O’Duffy Cup in 2021 as the Cats saw their grip on the title slip away when losing out to Cork in the semi-finals.

Kilkenny are down a number of players from the 2020 victory with Anne Dalton, Meighan Farrell, Anna Farrell and Collette Dormer, as well as the injured duo of Piltown sisters Aoife and Kellyanne Doyle, all unavailable at the moment.

That is a fair chunk of players to lose in the space of two seasons and as a result Galway will be fancied to top the group when the sides meet on Saturday week.

Of all the unavailable players, the loss of Aoife Doyle to a season-ending cruciate ligament injury may be the one that hurts the most.

The Piltown youngster has been a revelation since she made her debut in the 2020 championship and she also proved her versatility when moving out to midfield in the victorious Leinster Championship campaign earlier this year.

Her loss will be keenly felt and Brian Dowling will have to move around the chess pieces in his panel to try and find the perfect mixture.

Experimenting is nothing new to the Kilkenny boss after he spent the majority of the National League campaign trying out new players. That persistence will be valuable when the need is at its most urgent over the next few weeks.

The likes of Tiffany and Steffi Fitzgerald have continued their progress from an impressive third level Ashbourne Cup campaign where James Stephens star Niamh Deely also stood out.

Aoife Prendergast has grown into the role of Kilkenny team captain and with Denise Gaule, Katie Nolan, Katie Power and Miriam Walsh all standing out in the three games to date, Kilkenny can be relatively pleased with their progress on the field of play at least.

Kilkenny can only beat what’s put up in front of them though and that’s exactly what they have done with wins over Down, Antrim and Limerick thus far.

After a comprehensive victory over Limerick at UPMC Nowlan Park in round two, the Cats will get another outing at Kilkenny GAA HQ this Saturday where Offaly are the opposition.

It’s a game Kilkenny will be big favourites for as they look to make it four wins from four in the championship.

As well as the senior team, the Kilkenny intermediate side are also entering the latter stages of their championship campaign with games against Wexford and Meath upcoming.

John Scott’s second string selection have won two of their three games thus far with victories against Kildare and Derry coming either side of a defeat with Cork.

Kilkenny currently sit in third position in the Group Two table, and with games to come against the bottom two sides, the Cats will be hopeful of doing enough to qualify for the knockout stages of the championship.

The structure is the same as the senior grade with top position in the group advancing to a semi-final while the second and third spots warrant a place in the All-Ireland quarter-finals.

After losing out in last year’s All-Ireland final to senior newcomers Antrim, Kilkenny will be eager to get back to Croke Park.

With the likes of Shauna Treacy, Jane Cass, Ciara O’Keeffe, Emma Manogue and Niamh Leahy all available, the Noresiders certainly have a decent squad at their disposal.

Kilkenny will know that they will need to improve on their most recent outing which saw them claim a 2-7 to 1-8 victory over Derry in Freshford as the Oak Leaf County had them under pressure for long periods.

A win over Wexford on Saturday will certainly help as both sides continue their route through the All-Ireland series.