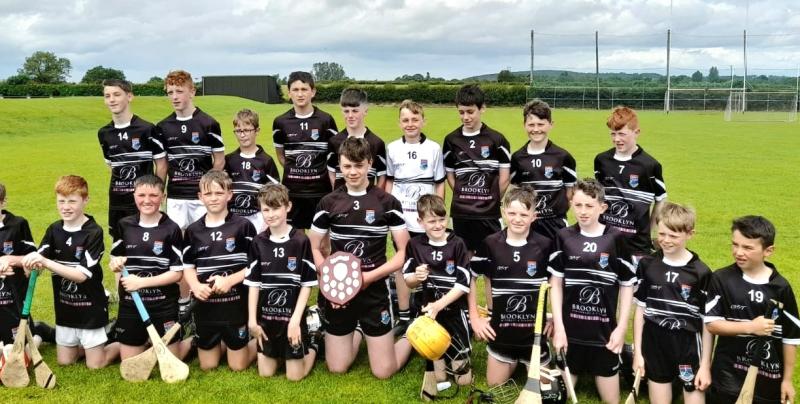 Last Saturday morning saw a big crowd turn up in Balyhale for this League Final.

Early signs were that the weather was going to be favourable but as soon as ref John Kennedy blew the whistle to start the game the heavens opened and the first 15 minutes of the game were played in horrendous conditions.

Carrickshock got off the mark first with point from Liam O Grady as he gave his side a brilliant start in the game.

The winners replied quickly when the very capable Cian Kelly carried the ball straight through the Carrickshock defence and buried the ball in the back of the net.

Game on now and the exciting start set us up for a cracker of a game.

Both teams exchanged points to keep the scoreboard ticking over but Mullinavat had the cushion of the goal for breathing space until a long ball hit in developed into a scramble in front of goal and it was goaled by a very determined full forward line in Carrickshock, hard to tell who got the final touch but Sam Mansfield was very busy in the tussle.

Adam Fitzpatrick added a second for goal for Mullinavat but again Carrickshock replied with a goal of their own from in around the square.

Mullinavat were hurling well at this stage but Carrickshock were looking very dangerous every time the ball was in their full forward line.

Mullinavat were quicker out of the blocks after the restart with a point from Cian Kelly and a goal from Adam Fitzpatrick.

Carrickshock to their credit stayed battling and worked their way back into the game with some well taken scores, the free taking by Cian Franks being a highlight of the day.

The teams continued to battle all day and continued to trade scores until the last 10 minutes when Mullinavat got the crucial scores to run out eventual winners.

Some top class performances on both sides contributed to a very enjoyable final in very tough conditions.

For Carrickshock, young Donie Cahill did all he could to keep Mulliavat at bay.

Eoin O Gorman, Jack Donnelly, Liam O Grady, Cian Franks and Sam Mansfield were among some of the top performers.

For Mullinavat Olly Madigan, Cathal Aylward, Patrick Aylward, Seamus Rohan, Cian Kelly and Edward Bolger all performed well but it has to be said that the performance of Adam Fitzpatrick at full forward, scoring 3-5 was the difference.