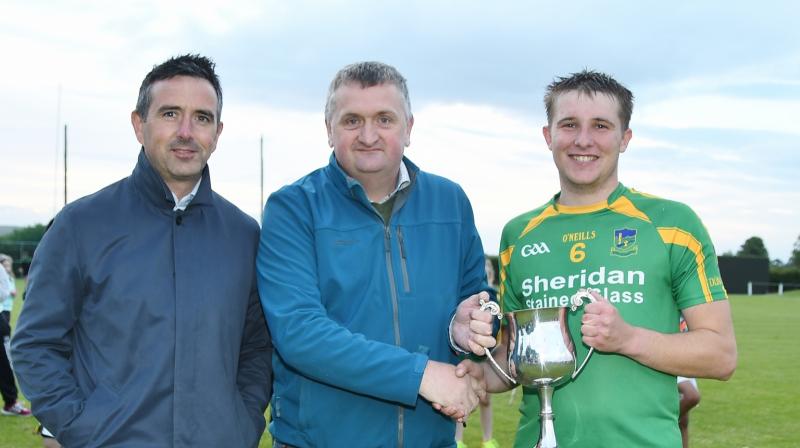 The Young Irelands men made the better start and they led by three points after four minutes with Paul Holden on target twice from frees, while Sean Carey was on target also from play.

Dunnamaggin settled & by the 10th minute they were level at 0-3 each with the oustanding Eoghan Kearney(Free), Ray Cody and Darren Fitzpatrick all finding the range.

Further points in quick succession from Denis Walsh and Darren Fitzpatrick in the 11th minute put them ahead 0-5 to 0-3.

Young Irelands replied with a Ted Drea goal in the 15th minute to go back in front (1-3 to 0-5) but Dunnamaggin dominated for the remainder of the half outscoring their opponents 1-5 to 0-2 to lead 1-10 to 1-5 at the interval.

Dunnamaggin continued that dominance into the start of the seconn half and by the 34th minute they led 1-14 to 1-6 in a half where there was on average almost a score a minute - Young Irelands outscoring Dunnamaggin 1-14 to 0-12 .

Further points from Eoghan Kearney (two frees), Peter Kenneally and Denis Walsh stretched the advantage & they appeared to be well on their way to victory, but Young Irelands to their credit fought manfully & a Padraig Naddy goal in the 35th minute began the fightback, 1-14 to 2-6.

By the 47th minute Young Irelands had narrowed the gap to the minimum (1-18 to 2-14) as Paul Holden added three points including a free and a ‘65 while points also came from Geoffrey and Patrick Brennan, Padraig Naddy and Sean Carey(2).

Dunnamaggin steadied the ship and points from Eoghan Kearney, Peter Kenneally & Substitute JJ Dunphy put them 1-21 to 2-15 ahead by the 52nd minute - 1-21 to 2-15 but the Gowran men fought back to salvage a draw and force a penalty shoot-out.

Paul Holden added three points in succession including an effort from play in the 57th minute that brought them level (1-21 to 2-18), before Dunnamaggin regained the lead with a pointed free by Eoghan Kearney a minute later.

Young Irelands battled back and after having an attempted free that dropped short of the goalmouth moments earlier, Paul Holden stood up to the fired over a magnificent long range equaliser from play to force a penalty shoot-out.

Paul Holden and Sean Carey were on target but Gavin Manning missed his attempt and Dunnamaggin had the advantage.

Both Joe Fitzpatrick and Jason Brennan negotiated their penalty attempts but unfortunately for Sean Kehoe his attempt proved unsuccessful and Dunnamaggin were victorious following a compelling battle.

Dunnamaggin were best served by the efforts of Michael Cody, Darren Fitzpatrick who constantly posed a menacing threat, the highly accurate Eoghan Kearney and Denis Walsh with Peter Kenneally outstanding when introduced as a first-half sub while fellow sub JJ Dunphy also had a positive impact.

A superb contest and both teams can look forward with optimism to the start of the League Championships which begin on the August Bank Holiday Weekend.