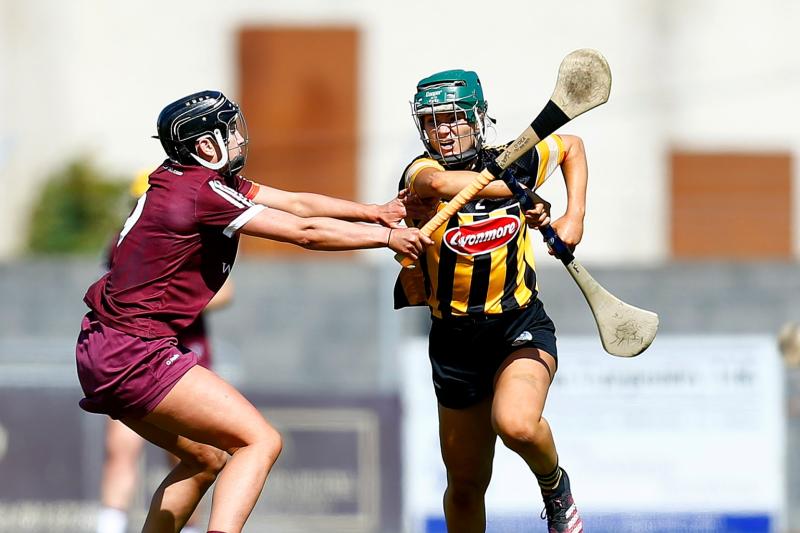 Kilkenny have to settle for a place in the Glen Dimplex All-Ireland Quarter-Finals after a draw against Galway on Saturday ensured the defending All-Ireland champions went a step further.

There is never much between the sides when they meet and this affair in Athenry was no different with a share of the spoils probably the fair result.

Both teams had won four games from four in the build up to the game but Galway’s superior scoring difference meant they could afford to draw the game and still finish ahead of the Cats so the hosts were certainly the happier come the final whistle.

Kilkenny will feel that this is a game they could have won as they led by two points heading into the final few minutes with a goal in each half from Miriam Walsh keeping them in touch after Galway led by six points at one stage of the first half.

Despite failing to automatically reach the All-Ireland semi-final, Brian Dowling’s side are still unbeaten in 2022 and with the likes of Aoife and Kellyanne Doyle sidelined as well as Davina Tobin, Collette Dormer and Meighan Farrell unavailable, it’s been a very promising few months for Kilkenny with a number of new players making te step up to the senior grade.

When the championship draw was made a couple of months ago, it always looked likely that the repeat clash of the 2020 All-Ireland final would always prove crucial in deciding the outcome of the group and that’s exactly how things transpired as Kilkenny and Galway played out a thrilling encounter.

Kilkenny started the better and within four minutes of play they had built up a two point lead after Denise Gaule scored a pair of efforts, one from play and one from a free.

Galway then created a goal chance when Niamh Kilkenny broke free but her attempt was well hooked by Katie Power before Ailish O’Reilly got the hosts off the mark in the 6th minute.

Denise Gaule and Racheal Hanniffy then swapped points to leave Kilkenny ahead on a 0-3 to 0-2 scoreline.

The game’s opening goal followed a couple of minutes later when Miriam Walsh calmly shot past Sarah Healy as the Cats moved into a four point advantage.

Kilkenny were also playing into a stiff enough breeze in the opening half so that buffer would have been seen as a big positive at the time.

Galway were quick to react though and within three minutes they found the net down the other end with Sabina Rabbitte scoring after Siobhan McGrath had an original shot blocked by Aoife Norris.

Galway then took complete control of proceedings as they knocked over the next seven points on the spin with a pair of points from Carrie Dolan levelling and puting her side in front in the 15th and 18th minutes before Niamh Kilkenny, Dervla Higgins, Siobhan Gardiner and Niamh Hanniffy also got their names on the scoresheet.

Kilkenny eventually broke a 20 minute scoreless spell with a Michaela Kenneally score in the 30th minute and before the half-time break, Mullinavat’s Julieanne Malone reduced the deficit even further.

As a result Galway led 1-9 to 1-5 at the change of ends but within 20 seconds of the resumption, it was a one score game as Miriam Walsh knocked over first point of the game.

Sabina Rabbitte and Carrie Dolan then added to the Galway tally in between another Gaule free but it was the Wingap star’s quick thinking that help Kilkenny reduce the lead to a point in the 40th minute after she found Miriam Walsh in acres of space with a quick free and Walsh duly did the rest when finding the net.

That left Galway ahead on a 1-11 to 2-7 scoreline and while Dolan replied from a free after Aoife Norris had earlier saved from Aoife Donohue, the visitors did seem to have the momentum.

Katie Nolan who had been well marshalled up to that point soon found the space to knock over a pair of quickfire points that brought the sides level for the first time in the game.

Rabbitte and Gaule then exchanged scores and there was still nothing to seperate the sides as the clock entered the final five minutes.

Mary O’Connell appeared from the bench to put her side in front in the 57th minute and with Gaule adding to it with her seventh point of the match, the Cats led 2-13 to 1-14.

Siobhan McGrath hit back for Galway but when Miriam Walsh did likewise it looked as if Kilkenny had done enough to top the group.

Galway had other ideas though and stoppage time scores from Aoife Donohue and Aine Keane rescued a point at the death.