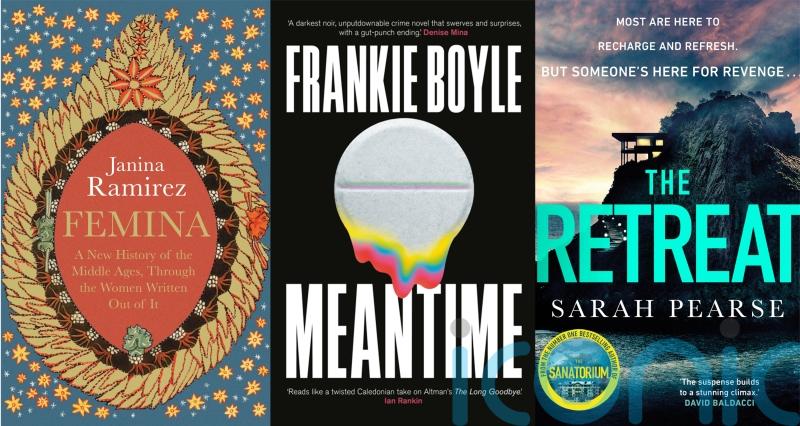 Frankie Boyle swaps comedy for crime with his debut novel…

1. Her Majesty’s Royal Coven by Juno Dawson is published in hardback by HarperVoyager. Available now.

Juno Dawson might be best known for YA novels, but now she’s launching her first adult series – and it has a supernatural spin. This is a fun and adventurous novel, drawing together fantasy and contemporary politics with great gusto and imagination. It tells the story of an ancient coven of witches, who are facing the same challenges as contemporary governments and individuals are today – but in an even more explosively dangerous way. Carefully crafted characters come together in this world that is so close to being ours, but still a step away from what we know, with magic and romance front and centre. Despite being a bit sickly sweet and gimmicky in places, this novel succeeds in drawing attention to vital conversations we all should be having, while also telling a brilliant story.
8/10
(Review by Imy Brighty-Potts)

2. The Retreat by Sarah Pearse is published in hardback by Bantam Press. Available now.

Fans of The Hunting Party by Lucy Foley might very well enjoy The Retreat. It’s also a thriller set in an isolated location – in this case Reaper’s Rock, a creepy island that’s been reinvented as an Instagram-friendly health and wellness spa. And very lovely it would be too, if it wasn’t for a vicious serial killer bumping off the guests one by one. Sent to investigate is DS Elin Warner, whose boyfriend happens to be the retreat’s architect, and who has plenty of demons of her own. In fact, pretty much everyone in the book is hiding a dark secret or a dodgy past, making guess-the-killer a serious challenge. With its short chapters, each one ending on a cliffhanger, The Retreat is designed to keep you guessing to the very end. A great one to read on holiday – provided you’re not visiting a creepy island, of course…
7/10
(Review by Jackie Kingsley)

3. Meantime by Frankie Boyle is published in hardback by Baskerville. Available now.

Frankie Boyle the stand-up comedian – whose brilliant rants are littered with funny, shocking, often obscene but always gripping storylines – has become Frankie Boyle the crime novelist, whose debut is similarly funny, shocking and gripping. Meantime is set in Glasgow, in the aftermath of the Independence referendum, with central character Felix McAveety just about staying clear of drugs long enough to investigate the murder of his friend Marina, after deciding the police aren’t interested. He needs help to switch from being an occasional bar worker/drop out to a private detective, so he enlists the support of a dying crime novelist. The investigation lurches through a heady mix of drugs, stalkers and dangerous criminals. You can imagine Boyle actually reading the book out loud, with each chapter peppered with amusing anecdotes and hilarious observations.
7/10
(Review by Alan Jones)

4. Femina by Janina Ramirez is published in hardback by WH Allen. Available now.

In 2007, on farmland in an unprepossessing part of North Yorkshire, archeologists excavated the burial mound of a seventh century noble who came to be known as the Loftus Princess. The significance of her grave and its lavish decorations challenged the common perception of the benign roles of women in the Middle Ages, and forms one of a series of inspiring portraits in Janina Ramirez’s Femina. Through her exhaustive research, a radically new narrative emerges; one which flies in the face of more conventional histories of the period. Ramirez reveals the lives of women who controlled vast kingdoms and acted as power brokers between rival clans, their stature emphasised by the veneration they were evidently afforded in death. Once routinely disregarded as ‘femina’ in historical records, Ramirez brings these long-forgotten heroines back to life. In doing so, she implicitly exposes the extent to which the realities of the period have been overlooked, and relishes the opportunity to set the record straight.
8/10
(Review by Mark Staniforth)

Children’s book of the week

5. You Can Do It by Marcus Rashford and Carl Anka is published in paperback by Macmillan Children’s Books. Available now.

A follow-up to You Are A Champion, children will undoubtedly find You Can Do It hugely inspiring. In it, Marcus Rashford shares some deeply personal stories – such as what was going through his head when he missed the penalty in the Euro 2020 final, as well as what happened afterwards – all giving teachable moments on how to be a better you. It covers everything from the importance of taking care of yourself and how to be a better ally, to why we should celebrate our differences. The language is clear, inclusive, not at all patronising, and will resonate with any child, and the illustrations give the book extra vibrancy. It’s perfect for any young person who’s looking to make a difference in the world, but doesn’t quite know how to go about it.
9/10
(Review by Prudence Wade)