Athletics; Joy for Harriers as O’Reilly races to victory with season’s best in Tullamore 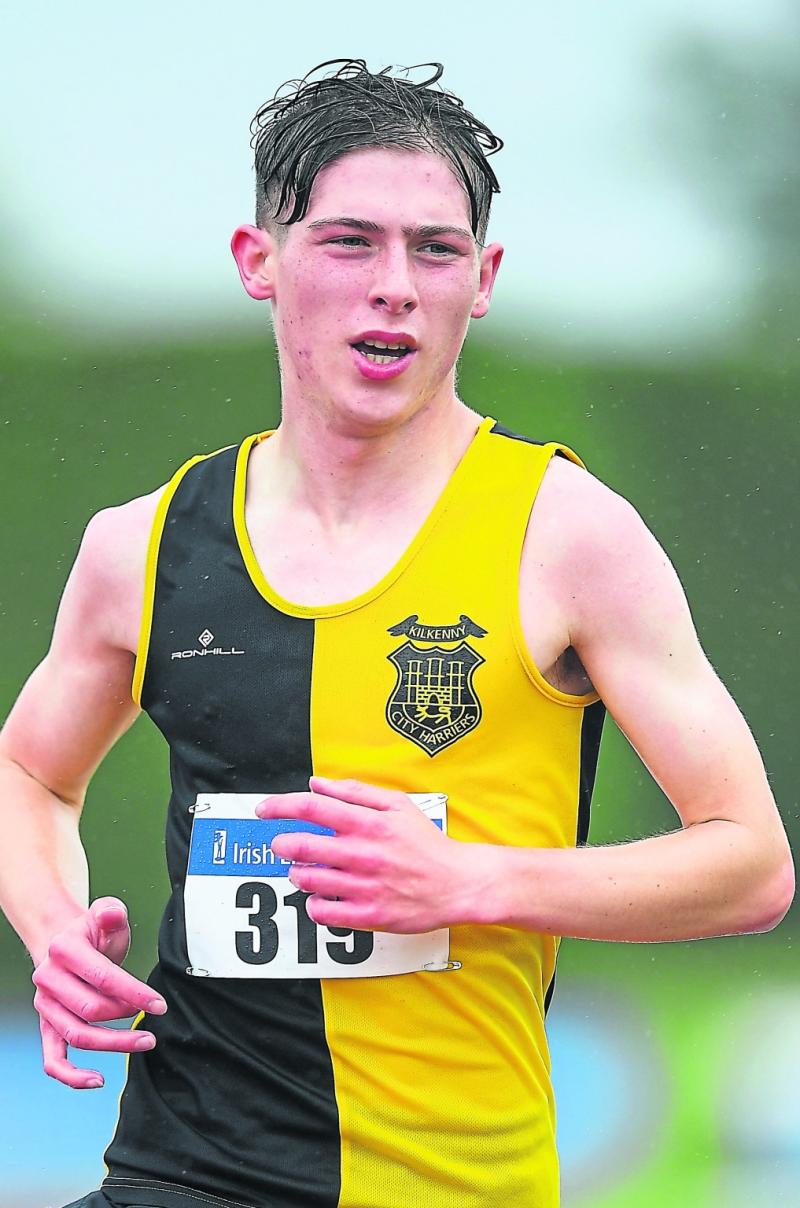 There was more excitement on the athletics front this past week as the World Championships in Oregon continued to enthrall and produce surprises, world records, drama and stunning performances.

On the home front the national combined events were held in Tullamore along with the AAI games. Irish international and Kilkenny City Harriers (KCH) athlete Cathal O’Reilly produced a great performance to claim gold in the junior men’s 5,000m.

There were also some great performances from the county’s combined events athletes.

Ireland may not have seen any athletes progress past the semi-finals at the World Championships, but quite a few made it to the penultimate stage.

There were some great performances from the Irish team in general - a signal of the rising standards of athletics in the country. Athletes who made the Irish team should certainly be applauded for their efforts this year, the hours of sporting entertainment they brought us through the summer, which is not over yet.

August is the month of the European Track and Field, where scores of Irish athletes will grace our screens. With relay teams not yet decided, there may yet be a chance for some Kilkenny athletes to travel to this event. Announcements will be made in the coming weeks.

From an athletics perspective, the highlight of the week was the amazing run by Sydney MaLaughlin (USA) as she broke her own 400m hurdles world record by almost a second. The time the Olympic Champion ran would have been enough to get her seventh in the 400m flat final, such is her speed.

The Africans continued their dominance in the distance events while the Jamaican women made a clean sweep of the women’s 100m.

There has been some last-minute switching of national events this year, which has been tough on athletes. The national 10,000 metres, normally scheduled to run as part of the senior programme at the end of June and the Junior 3,000m and 5,000m were pushed out by up to four weeks.

For athletes who had their peak dates defined at the start of the season, this certainly was not ideal. Many junior athletes would have preferred to do the 3,000m on June 30 with the seniors and the 5,000m with the junior event.

This has unnecessarily prolonged the season for these athletes. The consequence of which saw a drop in numbers for the junior 5,000m and senior 10,000m on Sunday.

Cathal O’Reilly took gold in the junior 5,000m with a time of 14.55 – a season’s best – though not as fast as the 5k road race he ran a few weeks back. It was a race held in the rain, as a nasty downpour graced Tullamore on what had otherwise been a day with decent weather conditions.

There may be a battle for honours on the world stage for the world decathlon and heptathlon titles, but at home Irish athletes contested the National Combined events last weekend.

The combined events consist of the decathlon for the men and heptathlon for women. At juvenile level this is the pentathlon (five events) which allows the younger athletes to master five events at a decent standard before moving onto seven and ultimately 10 in the case of the boys.

The pentathlon consists of the hurdles, long jump, high jump, shot and 800m. Each time or distance is awarded points based on an international points table. It is not a question of just winning your event, athletes strive to get as fast or as far as they can – each extra second or centimetre accumulates more points.

At the end of the five events, the points are added up and the athlete with the most points wins. The 800m is always the final event – often the weakest for those participating in the combined events. This can often be the event that ultimately decides the final point tally for a winner.

The numbers participating in the juvenile events were good, making the competition at each age group competitive and exciting, with podium positions changing throughout the day.

Decathlon can be a very demanding competition, with a gruelling schedule of 10 events to be completed in two days. Often it is events like pole vault, where the lack of facilities in local clubs to do the pole vault can inhibit athletes from progression from pentathlon upwards.

Eve Dunphy (St Senan’s) finished fourth in the under-16 pentathlon. Eve’s first national pentathlon, she produced a very good performance and was just 150 points shy of the bronze medal.

With some improvements to her weakest event - the shot-put - she could see a podium place in the future. She produced a personal best (PB) in both the hurdles and the high jump and ran a blistering 800m to finish first and move from sixth to fourth, with her time just one second off her 800m PB.

Ailbhe Steger (Gowran) also finished fourth in her under-15 pentathlon. Steger is well known for her ability in the jumping events, in particular the high jump. However, on Sunday it was the shot-put that sent her points upwards as she finished second in the shot with a PB of 8.08cm.

The girls’ under-15 was a very closely contested event, with the leading positions changing hands several times and the final race of the day, the 800m, really deciding those medals.

The AAI games were held in conjunction with the Combined Events and saw some sensational competitions.

This year’s event saw several international athletes take part. With the Australian team currently based in Ireland in advance of the 2022 Commonwealth Games to be held in Birmingham later this month, many of their athletes took part in both days of the AAI games. With the addition of athletes from Spain, Portugal, Czech Republic, Andorra, Belgium and a host of other countries, the international flare spiced up the competitiveness of the various events.

Jordan Knight (St Joseph’s) has been having a sensational season. With each long jump competition, he has been recording a new PB.

Two weeks ago in the National Juniors, he surpassed his old PB not once but four times to a new mark of 6.87.

On Sunday at the AAI games he reached a milestone when he surpassed the seven-metre barrier for the first time ever with a new PB of 7.06, some 19cm further than he had ever jumped before.

Cliodhna Manning (KCH) is another athlete who has been accumulating PBs of late. With her last two 400m races improving her mark to 52.60, she took to the blocks last Sunday to make another attempt to lower her mark.

The heatwave of last week had long passed and the mild up windy conditions were unfortunately not favourable for personal bests. Cliodhna ran her usual steady race and finished second to Roisin Harrison (Emerald AC). Her brother Jack finished sixth in the men’s 400m A race.

The 1,500m men’s race was full of international athletes, with three Australians and athletes from the Czech Republic, the UK and Hungary taking part. The race was won by Jan Fris (Czech) in 3.42 with Mathew Hussey (Australia) second with the same time.

It was good to see Lauren Dermody back on the track again as she contested the women’s 3,000m. The race was won by Aoife Coffey (Lucan) with Dermody second in 10.08.

In Manchester Shane Power (St Joseph’s) took part in a pole vault challenge where he cleared 4.31m. Shane is a pole vault specialist and will be in action again next weekend at the national league in Carlow.

The county 10km road race was held at the Pink Rock last Sunday, with 29 men and 22 women in action.

The team competition was very close with St Senan’s winning the team title by just one point from KCH.

James Kelly (Castlecomer) - another athlete who has had steady performances over the county road events - won the men’s race in a time of 33.12. He was followed home by Niall Sheehan (Gowran) and James Morrissey (Castlecomer).

Gowran not only won the men’s team event but were also second with Castlecomer in third.