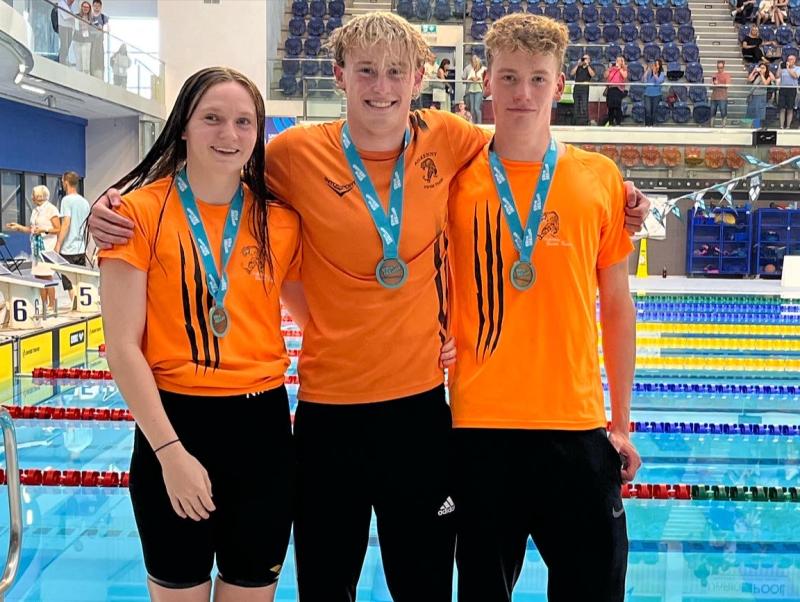 The culmination of the Irish swimming season saw a big contingent of Kilkenny Swimming Club members ascend on the National Aquatic Centre in Dublin for a five day gala. It was a good week for the Kilkenny swimmers who claimed nine gold medals.

In all a team of 25 swimmers represented Kilkenny across the five days with eleven swimmers reaching national finals in different 31 events. The standout Kilkenny performer was Callan’s Maria Godden. Competing in the 18 and over age group Maria accomplished a clean sweep of the three backstroke events 50m, 100m and 200m and also claimed 400m freestyle gold. Since September Maria has trained with the swim team in UL but continues to represent her native Kilkenny. Looking back on her week Maria was most satisfied with her 200m Backstroke gold medal which was achieved thanks to a new personal best time of 2.13.77.

Conor Johnson ruled supreme in the butterfly events for 18 year olds by capturing both 100m and 200m titles and in doing so set new PB’s of 57.02 and 2’12.01 respectively. The Kilkenny boys showed a particular ability for butterfly as Gowran’s Brogan McAviney also claimed gold in the 200m for boys aged 19 and over and he followed it up with a bronze in the 100m race. Not to be out done by his older brother, younger brother Matthew McAviney claimed bronze in the 200m fly also.

Naomi Trait is renowned as a freestyle swimmer and picked up bronze in both 100m and 200m for 18 and over. However, Naomi showed her ability across all four strokes by putting in an excellent swim to claim the 200m Individual Medley gold where she swam 50m of each stroke.

Conor Carroll and Paddy Cuddihy showed plenty of endurance to claim medals in the 800m freestyle finals. Conor competing in 13 year age group knocked 31 seconds off his PB to claim bronze while Paddy in the 14 years age group reduced his PB by 5.8 seconds to claim gold thanks in a time of 9’42 seconds. Both swimmers added bronze medals to their collections with Conor finishing third in the 400m IM and Paddy third in the 200m backstroke.

Aidan Cook claimed a pair of bronze medals firstly in the 400m freestyle and then in the 100m back both in the 18 year olds age group. In an exciting race the Kilkenny Mixed Medley relay team won bronze. Unlike traditional relays this event comprises of two men and two women. The Kilkenny team was made up of Maria Godden, Alex McLelland Maher, Brogan McAviney and Naomi Trait.  Other swimmers to make at least one final were Niamh Aherne, Nessa Godden, James McDonald, Alex McLelland-Maher and Erin Morrissey.

The swimmers at Kilkenny A squad put in many hours of training a week. They train six times for two hours (five of which are morning swims) plus strength and conditioning training. After a week like that in the NAC it seems to be paying off. Reflecting on the week, Kilkenny Swimming Club Head Coach John Duffy is very happy “this competition is a culmination of months of hard work. As a group they have done stellar work and it is great to see so many achieve personal best times and show progress in the sport. Many congrats to all of them.”

Kilkenny Swimming Club will hold trials for new members on 25th August. Places are limited. If anyone is interested please go to the KilkennySwimmingClub.ie for further details and there is a link to an expression of interest form which must be completed.