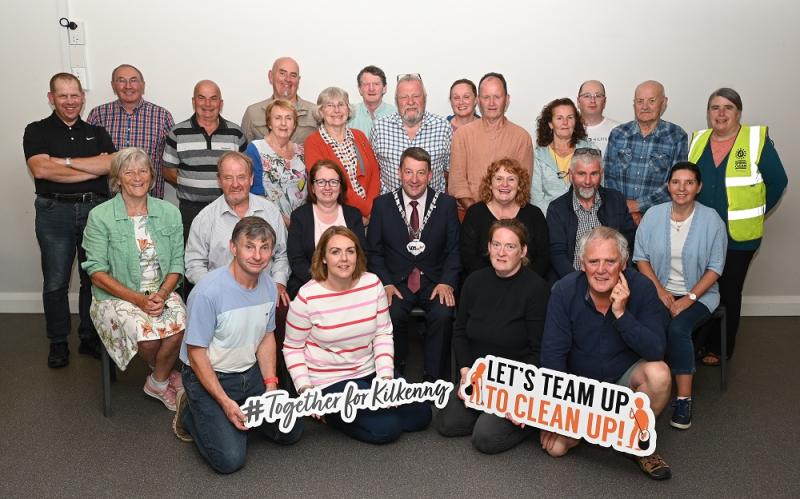 Ballyragget was in the spotlight this week as it hosted the Tidy Towns Forum which is a collective of Tidy Towns volunteers from across the county.

The forum administered by Kilkenny County Council enables tidy town volunteers to exchange ideas and stay informed about funding and other opportunities on the horizon.

“The Tidy Towns movement is close to my heart as it’s a terrific competition, as it puts focus on local communities.  Kilkenny has a marvellous track record with the competition and it often brings opportunities to towns and villages”.  Cllr. John Brennan was also present along with representatives of eight tidy town groups from across the County.

Before participants were brought on a walking tour of Ballyraggett, Bernadette Moloney, Environmental Awareness Officer presented on the Council's most recent anti-litter initiative titled, “Team Up to Clean Up, Together for Kilkenny”.  The attendees were informed of the pilot environmental action day being rolled out this October in Kilkenny City prior to a County wide event which is planned for next February.  These events are focused on encouraging community groups to litter pick their local area.

The walking tour afterwards presented an opportunity for Ballyragget Tidy Towns to showcase some of their projects including murals and new planting schemes., They also spoke of how it is a community effort to maintain all the public areas throughout the village.  The informal forum creates an opportunity for volunteers to share ideas and creates a support network to groups at different stages of the Tidy Towns Competition.  While some groups are long established within their community, they have only started entering the national Tidy Towns Competition while other groups have been competing for over 30 years.  No matter where groups are on their tidy town journey, the Tidy Towns Forum is a friendly and supportive network open to all community groups from Kilkenny.

Bernadette is also keen to get ideas of the needs of groups so the forum format stays relevant to the needs of the Tidy Town volunteers across the County.