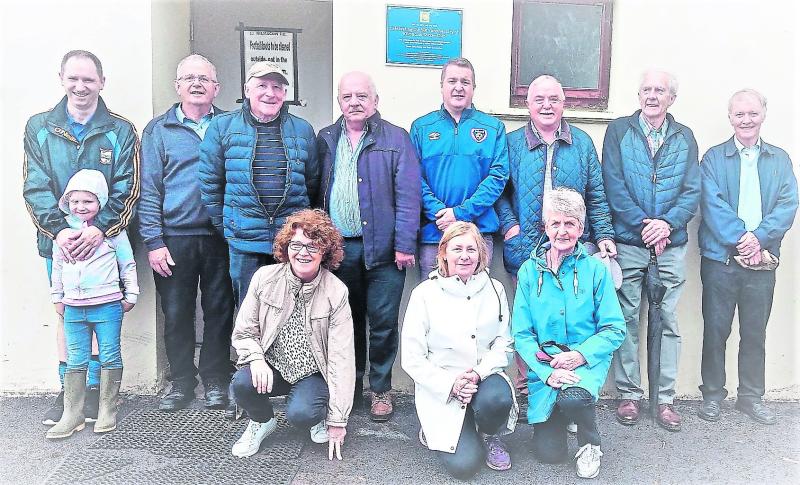 Kilmacow FC celebrated 50 years of football with a number of events. They marked the occasion by unveiling a plaque at the Sports Complex

Kilmacow FC celebrated the 50th anniversary of the club’s first matches on Sunday, September 26, 1971 at a get-together at the Sports Complex.

The event was held 50 years to the day after Kilmacow Third Division team were defeated 5-0 by Slieverue and later on the same day the Second Division team was defeated 1-0 by Ferrybank. Both matches were played at Twohig’s Field, Dunkitt.
The get-together was held at the Sports Complex, Kilmacow after the current Fourth Division team defeated Crusaders 4-2 in a highly competitive fixture.

Chairman Neil O’Callaghan welcomed everyone to Sports Complex. He was particularly pleased to see so many of the players present from the teams of 1971 and also noted the presence of players from the intervening years.

The chairman welcomed members of their families and friends to the occasion and thanked the players, committee members, coaches, managers and supporters for their huge contribution to the club over 50 years.
Dick Moore, who was a founding member of the club and a committee member every year since, was given the honour of unveiling the plaque to mark the 50th anniversary of the club.

The plaque is dedicated to those who transformed a vision into a reality and helped to create great friendships and fond memories for so many.

As a former player with Kilmacow John said he fully appreciated the huge level of commitment given by members of the club to the running of teams at junior and schoolboy league levels.

Tomás Breathnach, former player, highlighted the friendships made through the club and the contribution of so many club members to the communal life of Kilmacow. Adding that the club was now in the stewardship of a new generation and he wished them well in its development in the future.

After the ceremony the tea and coffee were welcome, the company was good, matches, incidents, trips and nights out were recalled. The importance of the club in the lives of all involved was fully appreciated.

Kilmacow Lotto
The lucky numbers in last week’s lotto were 3, 6, 7 and 9. There was one jackpot winner and eight winners in match three.
The jackpot for tomorrow (Thursday) night is €1,500.