Michael Lyng on life inside and out of the motoring trade 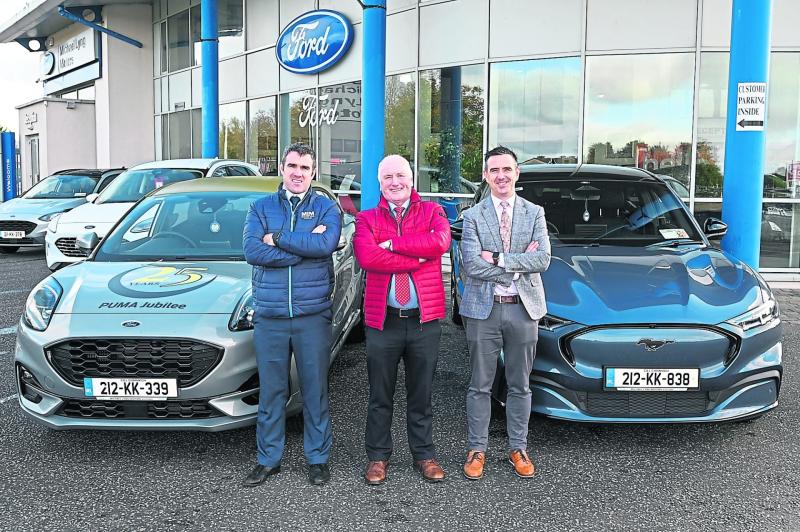 With due respect to posterity, never was the often-used cliché ‘from little acorns great oaks grow’ more appropriate than when one analyses the success that is the Michael Lyng Motors story which was launched in the latter end of the last century - November 1996 to be historically precise; and what a success story that has been.

Having completed his secondary school education at Good Counsel in 1973, Michael Lyng’s launch into the motor industry was less than auspicious, starting at the lowest rung of the ladder with Bolands Main Ford dealers in New Ross.

He certainly was not born into a culture of privilege or with a silver spoon in his hand to drink his soup. Coming from hard-working farming stock in the little hamlet of the Rower in South Kilkenny, Michael Lyng became aware of important elements like hard work, determination, loyalty, and honesty - elements that have been so much an integral part of his metabolism thus far in his changeable lifestyle.

And talking about the changeable!
Michael worked in the Main Ford dealership in Kilkenny from 1990 to 1996 before opening up on his own. Like all successful entrepreneurs, he needed to be master of his own destiny. But how he gave long hours in thought with consultation aplenty with his soul mate, Mary (nee O’Connor) and mother of his children Neil, Conor, Eimear and Ciara.

Taking his courage in his hands he acquired a premises, togged out a modest workshop; it was all hands to the pumps as renovations were tackled by family and friends alike. The popular Michael was not short of willing hands at the initial birthing of MLM. He succeeded in convincing the Mitsubishi corporation to take a punt on the abilities of the hugely enthusiastic man.

From day one, he was joined by his brother Gerry, a highly qualified and acclaimed motor mechanical engineer.
It was a huge step for the Lyng brothers. Mind you they could have picked a less daunting time to launch a business - the world was struggling with the skeleton of a recession as MLM dipped a tentative toe in the testing pool of motor sales. But as

Virgil wrote in the Aeneid, nil desperandum when faced with adversity, Michael never lost confidence in his own abilities nor that of his staff.

Michael Lyng Motors was well and truly on the road if you pardon the pun! 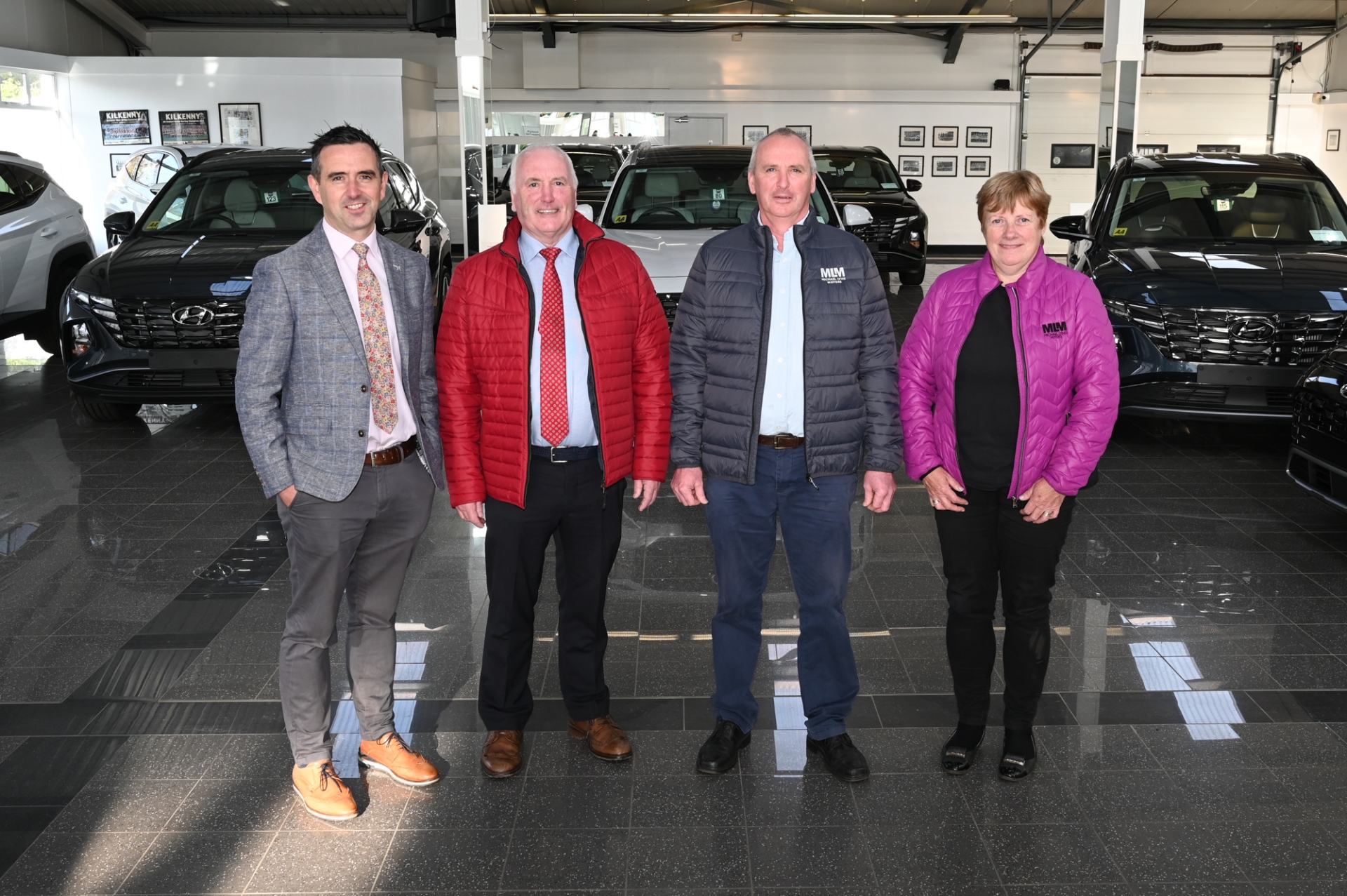 Reliable
Michael puts tremendous value on the importance of reliable, knowledgeable customer-friendly staff. He acquired the Hyundai franchise and the marquee Ford franchise. He built the superb Hyundai showroom and sales services garage. He created the Ford Sales outlet on the site of his original garage and MLM was sweeping towards the oyster that was the Kilkenny motor trade top spot with a growing reputation.

The company was certainly helped along the way with the explosion of motor car sales during the millennium when a staggering 200,000 cars were sold in Ireland, and Michael Lyng got more than an excellent share of that market. However, the motor trade was not always a bed of roses with plenty of difficulty encountered.

Let Michael define some, as they imploded on his thriving operation.

“We had a tough opening period with the dying embers of a horrendous recession. The foot and mouth crisis in 2001 didn’t help. Joining the EU in 2002 caused problems with the free movement of customers and the inherent development costs. The change in calculation of the Road Tax from a size of engine to a C02 emission didn’t help the Motor Trade. And in 2008 we had a recession which destroyed much of the trade with garages closing, many never destined to return, plenty of my trusted friends among them. They were tough times”, he remarked.

“As a matter of interest,” I asked, “how did MLM survive when many around went under?”

“Over 35% of garages closed,” he said, “many of whom were great people, and good friends of mine. We made an early call on the situation as we saw the situation evolving.

“I was forced to make the toughest calls which caused many sleepless hours,” he continued. “I cannot speak highly enough of the 62 people who work for us. Dependable, trustworthy to a fault, honest and extremely loyal.

“In truth they are the reason collectively why Michael Lyng Motors enjoy the reputation it has earned, all the above traits were proven further throughout the last 20 month with the challenges Covid and Brexit presented.

“It gives me an added pleasure to have my two sons, Neil and Conor join me in the Company,” he added.
Other elements that have added lustre to the reputational status enjoyed by team MLM! Michael himself has been steeped in matters GAA. It is a well-known secret that he was the first player from the Rower Inistioge club to captain a Kilkenny team in an All-Ireland final – under-21 when beating Cork in the Final. The year? It was 1977. 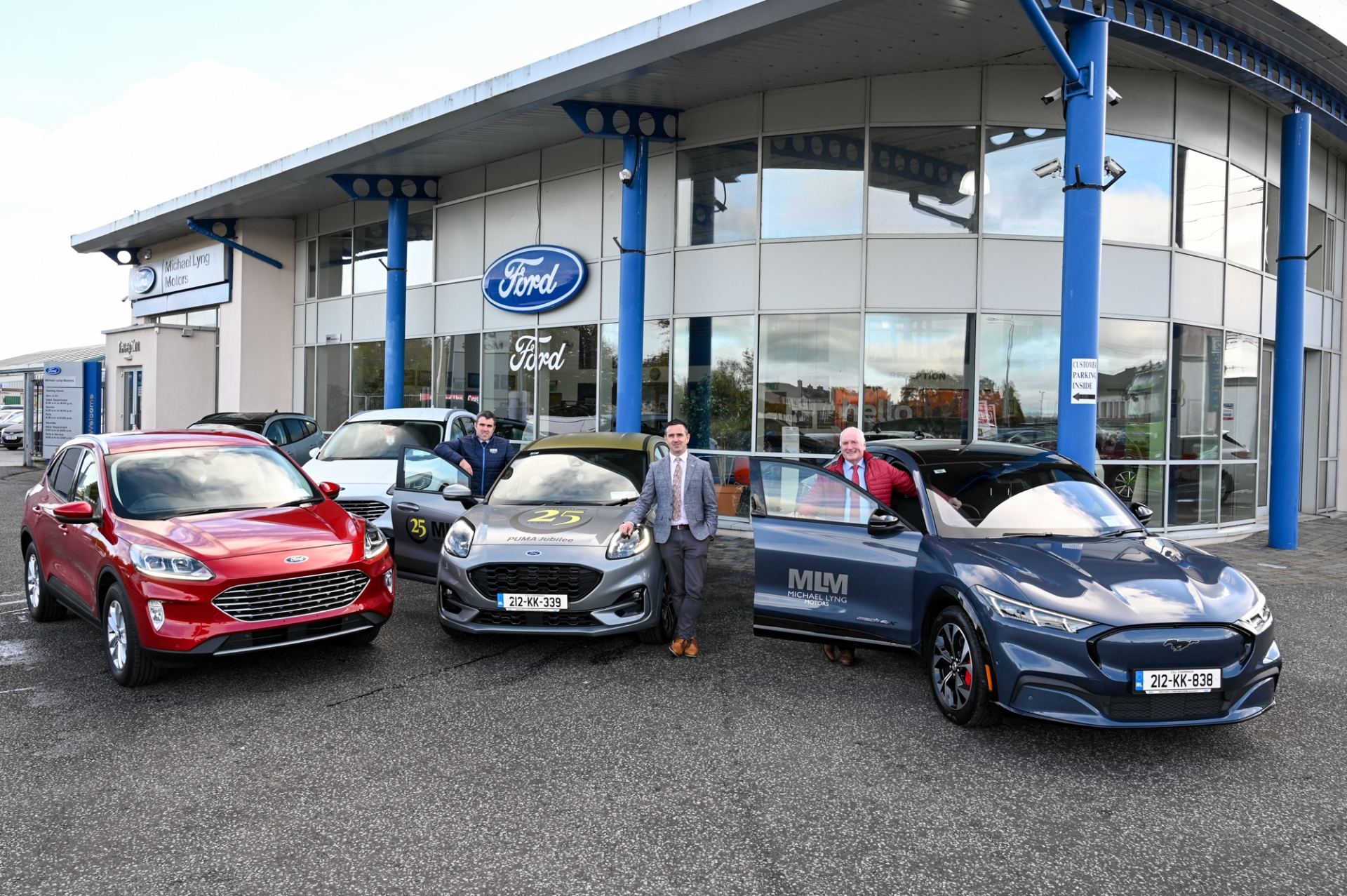 His sponsorship of many things GAA knows no bounds. From his club to the intercounty arena, from hurling, football and camogie, Michael Lyng Motors are synonymous. The GAA family is so much inherent in his DNA. Back in the 2000s Lyng All-Stars were a treasured possession of hurlers in Kilkenny. What a night of great enjoyment, craic and brotherhood it was when Lyng Motors came up with the innovative idea of Kilkenny - one of the great GAA counties - having its own Hurling All-Stars where the best hurlers across all grades of adult hurling were chosen on the Kilkenny All-Star team.

Well I remember the very first night when, in front of a ticket-only crowd, the All-Star team was announced, and the overall All-Star player of the year was chosen.

Bet you cannot remember who the first Lyng Motors All Star senior Hurler of the Year was? Well I’ll let you off the hook! James Stephens’ Eoin Larkin had the honour and how it was celebrated. Over the ensuing four years, players like James ‘Cha’ Fitzpatrick, Jackie Tyrrell, TJ Reid and Brian McEvoy emblazoned their names on the coveted trophy, with the use of a car for the year. The occasion was enhanced by the presence of the legendary broadcaster and raconteur, Micheál O Muircheartaigh who never failed to enthral the gathered throng in the suitably presented Langton House Hotel.

At this juncture is it any surprise that there is a remarkable rapport between the GAA family and the Michael Lyng organisation, and it is not a one-way street. The MLM Group are not content with being front and foremost with the GAA connection in his own county, but he is the main sponsor of the Carlow Football Championship, and has been for a number of years.

Strong Connection
Again, there is a strong GAA connection with the GAA the moment you walk through the doors of his sales room on the Sleaty Road in Carlow Town because it is a pound to a pinch of snuff that the first person that crosses your path will be the former Offaly hurling star cornerback David Franks.
You just can’t get away from it, can you!

Michael is very proud of the many Trade Awards his Company has earned, starting with the Mitsubishi Dealer of the Year Award in 2000.

With great regularity such Awards have become commonplace with the Ford brand and the Hyundai franchise.

“When you win Awards based on the core value of customer satisfaction you know you must be doing something right,” said the modest Rower man. “In fact, it gives all of us a tremendous sense of pride to know that the Hyundai Brand has been the highest selling brand since 2015. It was also best in class in 2013”, he added.

Another little nugget of satisfaction has been the marriage between the St Canice’s Credit Union and MLM whereby a Ford Focus is the prize in the Credit Union Draw among its huge membership.

You guessed right! Michael Lyng is the partner in that linkup.

There is no doubt about the status of Michael Lyng in car sales and services. He cut his teeth on the motor business from the moment he left school. He has established a reputation of good governance, honest endeavour, reliability, unquestionable knowledge of his trade, and above all else, honesty in his dealings.

When Michael Lyng and his family took the unpredictable step some 25 years ago to go it alone, he didn’t know where the road would lead. He had hope, and courage. Remembering what John F Kennedy said on his visit to New Ross “Some men say why, others say why not”.

Easy to work out what Michael Lyng’s decision was 25 years ago. Happy 25th anniversary!