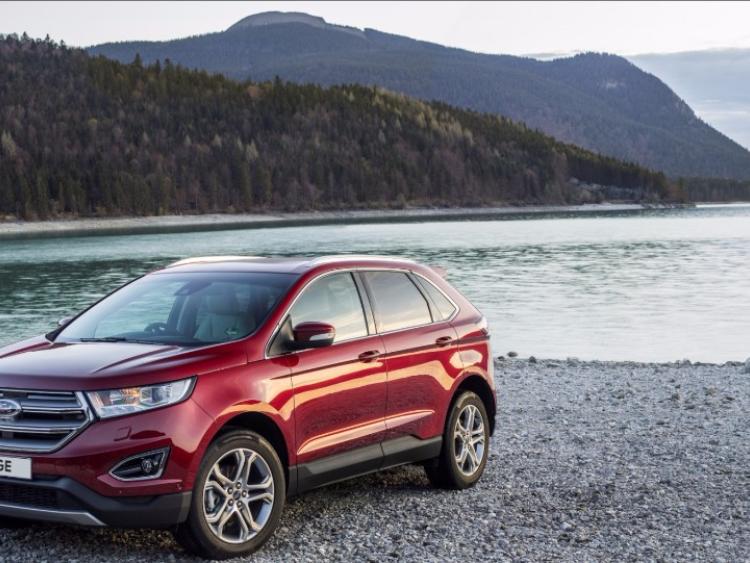 Like it or not, this is the age of the SUV/crossover.
Last year the SUV segment became the best selling sector in Europe for the first time with a staggering 24% increase year-on-year.
And the sales graph is predicted to drive in only one direction. It appears that once people get to sample the elevated driving position, that's it.
We have a friend who could in no way be described as a car enthusiast. He was a happy, committed Toyota Avensis man, but he somehow ended up having a look at the Hyundai Tucson when last thinking about changing.
That was it. He drove. He was hooked. He bought. He loves his car like no other he ever owned.
Latest offering
Ford's latest offering in this area is the muscular all new Edge. This is muscular Adonis rather than Schwarzenegger mind you, but it comes at a price.
The entry level model - all come with Ford's Intelligent All Wheel Drive as standard - costs €55,700.
Now that is a fair price tag no matter what badge you have on the back or front. For all the space age technology the Edge offers, and it certainly offers a lot, getting people to plump for the Edge over a competing BMW, Volvo, Audi or something like that will be the challenge.
The Edge was born in the USA, but Ford insist they have re-shaped and re-tuned things sufficiently to suit different European tastes and driving demands.
Liked look
Have to say I liked the look of the car, its kit, the easy going nature of the beast, and the general package right down to the decorated dual exhausts.
The first thing that strikes with the Edge is the sheer size - space, space, space - front and rear and even the boot that offers 602 litres of space but can be swelled to 1,788 litres if the rear seat backs are dropped down.
That is a lot of room!
Ford argue the Edge offers more room than rivals like the Volvo XC60 and Audi Q5.
The seats in the Edge are premier class, large and welcoming, offering lots of support.
Luxurious interior
The interior is luxurious and when driving around town the Edge is 'Mr Hush', with the world and all its noise and challenges left outside.
The ride is pleasant if not as quiet on open roads, and handling leans on the side of comfort.
The Edge is geared at top end buyers, and the drive reflects that. It is all nice and relaxed, refined, mannerly and so on.
Don't expect shot from a gun performance. This is a big machine, weighing nearly 2-tonnes, so the Edge takes a while to get into its stride.
For me, at my mature age, the mannerly ways of the car was a nice trade off for the toned down urgency.
All powertrain feature Ford's Intelligent All Wheel Drive system, which guarantees secure footing no matter what.
Apparently the system gathers data from 25 different sensors to measure how the car's wheels are gripping the road and can adjust torque delivery in under 20 milliseconds.
That's 20 times quicker than it takes to blink. That's where Ford and the Edge are at....the cutting edge of technology.
The price thought, that's the stumbling block.
The car
Ford Edge Titanium 2.0TDCi, 180PS, manual 6-speed gearbox AWD €55,700, CO2 Emissions 149g/km, annual road tax €390, 0 to 100kph 9.9 seconds, top speed 200kph, fuel consumption 5.8l/100km (48.7mpg).
Features
Standard - 19” alloy wheels, front and rear parking sensors, keyless entry with hands-free, power tailgate, chrome roof rails, Ford Navigation with 8” touchscreen, rear view camera, heated windscreen, cruise control, lane keeping aid, traffic sign recognition, illuminated scuff plates, auto lights and wipers, quick-clear, power-fold mirrors, dual zone climate control, Thatcham alarm, power fold-down rear seats, Collision Avoidance System.
Additional options on test vehicle - BLIS (Blind Spot Information System) €600; rear inflatable seat belts €225; adaptive LED headlamps with glare free technology €1,920; Sony Navigation System (with 8’’ Touchscreen, advanced voice control audio, climate control, emergency assistance and 12 speakers) Ford SYNC2 €660; Active Park Assist (with Parallel and Perpendicular parking) €250; full leather Ceramic trim €3,000.
Price for All-New Ford Edge from €55,700; plus additional options above (€6,655) €62,355 (ex-works).