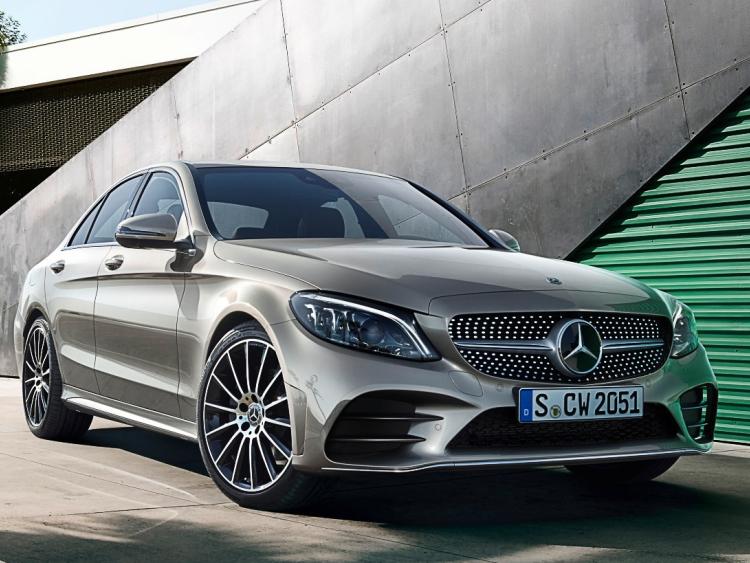 Following an extensive mid-term makeover Mercedes-Benz is preparing the groundwork for the introduction of their latest C-Class saloon, estate, coupé and cabriolet models.

One of Mercedes-Benz’s great success stories, C-Class has recorded global sales of some 9.5 million units since it was originally launched, with close on half a million sold last year alone.
Though it will be September and possibly later before Irish motorists get the chance to drive it, it is said that the upgrade made in terms of its design, specifications and technological advancement raises this latest C-Class range well beyond what customers might expect.
Visually enhanced, with redesigned front and rear bumpers, new front and rear lights, chrome highlighting, new silver and emerald green metallic colour additions and diamond pattern grille on AMG versions, its other key features include completely new electronic architecture and a new generation of four-cylinder petrol engines.
It will be offered in three style and equipment lines – Avantgarde, Exclusive and AMG.
Describing the new C-Class range as ‘a product of our time’, Mercedes-Benz sales manager in Ireland, Ciaran Allen said that in terms of its high-tech, high-value safety and drive-comfort improvements, the new C-Class range raises the bar in terms of what might have been imagined when production of this latest generation began only a few years ago.
Models likely to feature strongly in the Irish market will be the C180 petrol and the C180d and C200d models. Prices will be announced later.

Digital technology
In its use of digital technology, the new C-Class range keeps pace with other Mercedes-Benz newcomers with safety-focused driver assistance and infotainment systems managed by touch-sensitive steering wheel controls.

Amongst its innovative eco-friendly features is EQ Boost which helps reduce fuel consumption and deliver extra power when accelerating or when operating at low speeds.
Arriving next year will a plug-in diesel hybrid that combines a new generation diesel and a latest-generation 9-speed hybrid transmission to deliver additional electric power, added torque, and an intended range of around 50kms on electric power alone.