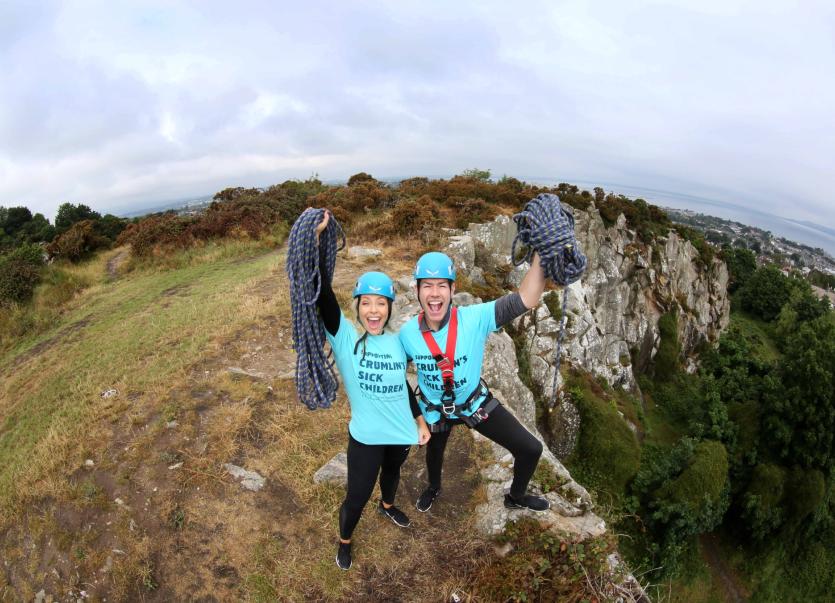 Ryan and Michaela will be going to new heights on September 18 when they abseil off the roof of Croke Park in Dublin. By dropping 100 feet off the Hogan Stand, Ryan and Michaela are raising vital funds to support the care and treatment of sick children in CHI at Crumlin. And you can too, CMRF Crumlin supporters in Co Leitrim can join Ryan and Michaela to sign up to take part.

“We're delighted to be taking part in the Abseil for CMRF Crumlin challenge,” says Ryan. “It all made it real when we put the harnesses on and looked out onto Killiney Hill to hone our abseiling skills. It's a long way down to be honest. We think we're ok with heights, and we've never had a problem with it before. But when you're hanging off Croke Park it's a different story. So we'll see. I'm saying we'll be ok with heights now but hopefully I won't back out on the day.”

During Ryan’s stint on ‘Dancing with the Stars,’ he revealed that he was living with a serious health condition that is sometimes misunderstood.

“With scoliosis I never really took any notice of it. At the end of the day it was really just a word on a piece of paper, and that's all that I kind of saw it as. But then it was only as I got older and got on 'Dancing with the Stars' that it made me realise with all the struggles and pain I was going through – the embarrassment and self-consciousness that I was going through, to be open about it.”

National Scoliosis Awareness Month takes place every June to highlight the growing need for education, early detection and public awareness about scoliosis and its prevalence within Ireland. Scoliosis is surprisingly common and affects four in every thousand people. It is more common in girls than boys, and can develop at any time during childhood and adolescence.

“There's lots of different initiatives throughout the year but National Scoliosis Awareness Month is important, and I've opened up a bit more about it. The amount of people who have come to me and said I have that. I think people thought that there was something wrong with them,” says Ryan “and they were nearly afraid to go to the hospital because they didn't want to hear anything wrong. But I'd be like look there's absolutely nothing wrong with you. It's you but just in a different way. Everyone is different and everybody has their own troubles so if you have scoliosis it depends how you deal with it and adapt to it that makes you the person you are and not just having scoliosis.”

Ryan adds: “'Dancing with the Stars' was probably one of the best experiences I have ever had. It's something I have always wanted to do. It was hard. It was physical and daunting and that's why I did open up about it because I was struggling at the time. I couldn't really do it because my back was giving me pain - the posture, the lifts, and the ten hours of training every day. So then they said that's why you need to open up and show people that you're going through all of this but that you're still overcoming it.”

Bernice Condon, Challenge Fundraising Executive with CMRF Crumlin says, “We are delighted to have Ryan and Michaela join us for this year’s abseil, having experienced CHI at Crumlin first hand, he knows first-hand what the children at CHI at Crumlin go through. The abseil is a great way to get involved in fundraising while challenging your fears. We’re calling on our supporters in County Leitrim to sign up to raise vital funds for our little patients.”

Sign up to join Ryan and Michaela as they abseil off Croke Park on September 18, 2020 CMRF Crumlin hopes to raise €30,000 this year with spaces limited to 80 people.

There is a €70 registration fee and the minimum people must raise is an additional €350. Participants will climb down behind the large screen on the Hogan stand before dropping down in a 100 foot abseil to the pitch side.

For those interested, please email Bernice at abseil@cmrf.org [Social distancing and all health and safety measures will be adhered to during the abseil].