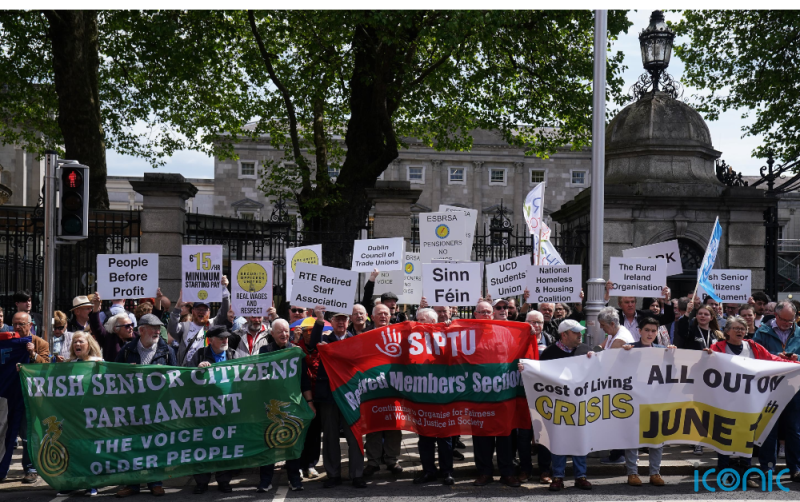 Leo Varadkar has told the Dáil the Government is working on proposals to target the rising cost of childcare and public transport.

The Tánaiste said there are areas in the cost-of-living crisis where the Government can do more.

Mr Varadkar told the Dáil that people are “feeling the pinch” and struggling to make ends meet.

He was challenged by Sinn Féin’s Pearse Doherty on the Government’s record of helping householders through the cost-of-living crisis.

Mr Varadkar said the Government has to date provided 2.4 billion euro in relief to help the public.

Mr Doherty, Sinn Féin’s finance spokesman, said: “There’s no doubt that the cost-of-living crisis is reducing the living standards of low and middle income households right across the state.

“Inflation in the last 12 months to April has been reached over 7% and that’s the biggest spike we’ve seen in prices in over two decades.

“Workers and families out there are really struggling. They’re seeing their energy bills soar and they’re seeing other costs rise and we know what it’s caused us.

“Many factors are beyond our control, some others are not.

“Soaring rents, unaffordable childcare are not beyond the control of this government.

“In many ways they have reached such unaffordable levels because of Government policy, and Government can and must respond.

“We in Sinn Féin fully recognise that every household can’t be protected from every single price increase, but low and middle income households must be supported, and in this regard, the Government has lost control of the cost-of-living crisis.”

He said electricity bills have increased by 28%, gas bills by over 50%, rents by 12% while the cost of home heating oil has almost doubled.

Mr Doherty called for an increase in social welfare rates, a rise in the minimum wage, bring in targeted measures for renters and ban rent increases.

Mr Varadkar said the Government has brought in measures to help householders.

“A lot of these inflationary pressures are beyond the control of governments, or at least the Irish Government, because they are driven by international factors,” he added.

“But there are areas where we can help and can do more such as childcare, such as public transport and we are working on proposals on those areas.”

He added: “I am a little but disappointed by your question because there was no acknowledgment at all that the Government has done anything to help people with the cost of living, that’s not fair.

“We’ve had packages totalling 2.4 billon euros to help people with the cost of living.

“That relief is to help families with the cost of living.

“We had welfare increases in January and since then there has been further increases acknowledging that fact that people living on welfare are being hit hardest by the increases in energy costs and food costs.”

Meanwhile, protesters gathered outside the Dáil on Thursday over the cost-of-living crisis and soaring prices of energy.

Senior citizens, students and workers staged the protest over the cost of housing, college fess, health and childcare costs.

Beth O’Reilly, vice president for Campaigns at the Union of Students in Ireland, said some students are being forced to chose between buying school materials and food and heating.

“The cost of living for students has always been astronomically high, we already pay the highest fees in the EU but with rising electricity and gas prices, the rising cost of food and childcare for mature students and single parents, it’s a disgrace the Government has not done anything and making access to education incredibly expensive for people.

“The price of education should never be a barrier for those who wish to access it.

“Bills are so high for ordinary people and the onus is on the Government to make some reductions, to work through legislation that will reduce the cost-of-living.”