Siobhan Donohoe chats to Sarah Quinlan, General Manager with O'Brien Renault Kilkenny, about how the motor industry is getting back into gear after the coronavirus pandemic 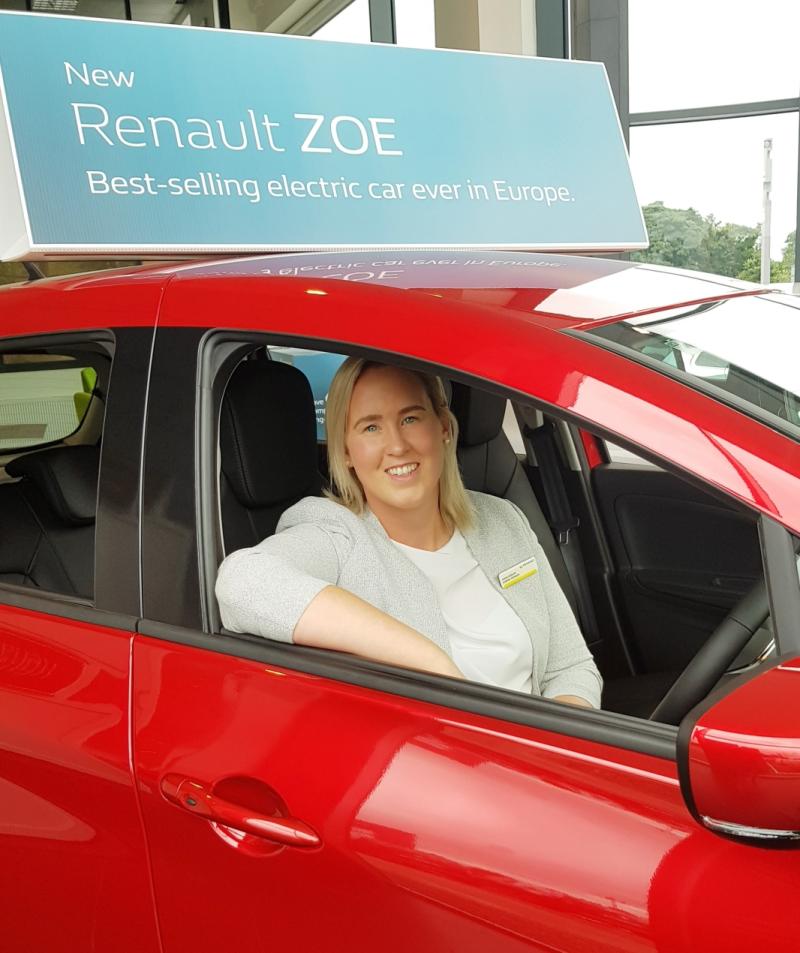 Kilkenny native Sarah Quinlan had no idea she would end up managing a Renault dealership when she was sitting her Leaving Cert in Loreto Secondary School.
Sarah had chosen accountancy for her career and completed her degree in WIT, after which she trained as a chartered accountant with local firm O’Neill Foley.
In December 2010 she started working at O’Brien’s Kilkenny, Renault and Dacia dealership. They had opened in September in the showroom on the Waterford Road with a workforce of six. Since then the business has grown, more so when they took on the Audi franchise in 2013, bringing the workforce to 30. Within six short years Sarah was promoted to General Manager, in addition to her already busy role of Financial Controller.
Sarah grew up in Dominic Street next door to Mrs Treacy, mother of Tom Treacy, who had the Renault garage in Irishtown for a number of years until 2007 (small world!)
Sarah’s father Mick worked as a guard in the Garda Station across the road and her mother Noeleen as a map plotter for Ordnance Survey Ireland. She has a sister Rachel, a hairdresser at Image Hair Studio, and a brother Paul, who works in TransferMate.
Shortly after her promotion in 2016, Sarah’s older brother Mike (35) was diagnosed with bowel cancer and died the following July. This understandably had a huge impact on Sarah and her family. Sarah said it’s something that they’ll never ‘get over’ but together they have had to adjust to life without Mike and are grateful to all their friends and family for their ongoing support following their bereavement. They remember and honour Mike on his third anniversary this week.

Here is a glimpse into Sarah’s busy world in the motor industry…
You are the only female General Manager in the motor industry in Kilkenny, a largely male-dominated industry in general. Why has it taken so long for the motor trade to have women in management?
Yes, it’s an unusual position to be held by a female in the motor industry in Ireland.
Historically the industry has been perceived as a bit of a boys club. This is changing slowly and an indication of this is the fact that the official voice of the motor industry, SIMI, have just elected their first female president ever, Gillian Fanning. She and I both agree there is no reason why there can’t be more females working in the motor industry. Women represent a critical but under represented resource capable of helping companies to take competitive advantage.
The gender disparity is particularly evident in the areas of sales and management. Marketing images need to change to reflect women. Also, making women more visible in the industry will help change perceptions in general, presenting the industry as an environment open to welcoming female candidates in all roles.
This year was promising to be a great year for the motor industry and garages were ready for the demand of 2020 registrations. Has that has all changed now with Covid?
Yes. Like others, O’Brien’s Kilkenny was ready for a great year. We had a complete revamp of our showrooms in 2018 and just this year Audi Kilkenny opened its doors to a new showroom next door to O’Brien’s Kilkenny.
With the nature of the motor trade our roles are constantly evolving and we need to be able to adapt quickly and efficiently to the challenges that come our way.
Of course the most recent curveball has been Covid-19 and the massive impact it’s had on our industry. We were closed for eight weeks in accordance with the government guidelines, but thankfully we’ve been back to work since May 18 and are busier than ever!
However we are aware of the forecasted recession and the fact that new car registrations are down year to date 35% on 2019 so these are very challenging times for the industry.
Over the eight weeks that we were closed, I was in regularly - I live less than 2km from the garage. We needed to make sure that customer queries were dealt with every day and that any breakdowns were sorted quickly so that our customers weren’t stuck.
Renault also have a contract with An Post, which is an essential service, so we had to maintain their fleet of Renault Kangoo vans and keep them on the road. We were able to bring in mechanics and service staff as necessary over the weeks.
What health and safety changes have you made for customers coming to your dealership during this pandemic?
In preparation for the reopening in May additional signage was brought in for the showrooms, screens for desks installed and ozone sanitisation machines were purchased.
These sanitisation machines convert the oxygen/O2 to O3/ozone which is a powerful sterilising agent which kills bacteria, viruses, odours and mould spores, leaving the car odourless and giving the customer important peace of mind.
All service/sales vehicles are sanitised now daily as needed, with staff having gone through training to ensure that every precaution is taken with regards to Covid.
The motor industry has seen a lot of changes over the past 10 years, the biggest change being the arrival of electric vehicles. Do you think our Government is being realistic with their expectations that everyone will be driving one by 2030?
This represents both a challenge and an opportunity for the motor industry.
While many people would have you believe that we will all be driving electric cars in 2030, a more realistic target is probably 2040, given the current infrastructure in the country.
In saying that, there are electric cars on the market currently which are a very viable option for customers. Our own 100% electric Zoe, for example, has a range of 300km and is the most affordable car of its kind on the market starting at just under €27,000.
Upon purchasing a Zoe, a free home charging point is included, therefore negating the need to use the public infrastructure the majority of the time as the customer is charging their car nightly.
What is the most popular vehicle colour for 2020?
The most popular car colour is grey. I’m not surprised, given its popularity in people’s homes lately! It’s followed by black, then white, then blue.
When you are not managing the motor dealership through challenging times what do you do for downtime?
I am an avid equestrian. I learned to horse ride in Warrington Equestrian Centre and was Secretary of Warrington Riding Club for years.
I purchased my first horse Savannah in 2007, shortly after qualifying as an accountant. We spent many years travelling the countryside show jumping and taking part in amateur competitions.
Savannah has since retired and bred a foal - Setanta - who I hope will bring lots of adventures in the coming years. Coincidentally Setanta was born on the same day as my brother Mike’s first anniversary.
Sarah and her team at O’Brien’s Kilkenny are looking forward to celebrating 10 years in business this September with their brand ambassadors Jackie Tyrrell and Mick Galwey.