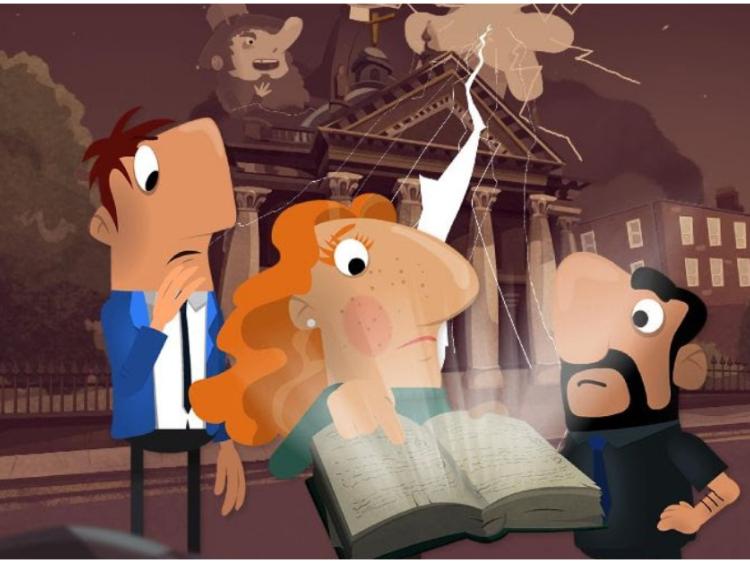 Fantasy Ireland is set in a fantastical version of contemporary Ireland, with a dollop of Irish mythology thrown into the mix. No topic is sacred - whether it’s politics, Irish history, myths and monsters, modern Ireland,  the church or Aldi specials, they’ll be lampooned with a good dose of irony, satire and unadulterated craic.

There are fierce strange happenings going on. Ireland is in grave peril, shrouded in a mist of malevolence. This is the time when we need heroes like Cu Chulainn, Fionn Mac Cumhaill and Daniel O’Connell to rise up once again. However, since everyone seems to have fecked off to Australia looking for work we’re left with Ciara, Tony and Jay - AKA The Shamz - three eejits who have been tasked with saving the Irish nation.

This irreverent and downright funny series features 13 x 11min episodes, where we follow the adventures of our trio of unlikely heroes The Shamz – featuring up-from-the-country Ciara, South Dublin snob Tony and West Dublin chancer Jay -  as they battle the greedy and power-hungry Fr Murphy and his mischievous and gold obsessed side-kick, The Leprechaun Flatley. This evil pair of shitehawks are hellbent on sucking the island dry of its wealth and wellbeing. It’s up to the three Shamz to stop them.

Each member of The Shamz brings their own particular set of skills - Ciara is the heart (and a fountain of Irish knowledge, to boot) Tony brings the credit card and Jay brings the brawn and, with the help of President Mickey D, they plot and plan how to thwart Fr Murphy and The Leprechaun Flatley.

Fantasy Ireland is riotous, witty, packed to the rafters with irishisms, crazy monsters and filled with serious laughs.

Fantasy Ireland is bound to be the next ‘must see or you’re not worth taking to’ series.

Set to air on RTE2 on Thursday, October 8 at 11.20pm, grab the Tayto and tune in for a show quite unlike anything you’ve seen before. Don’t miss it, to be sure to be sure!