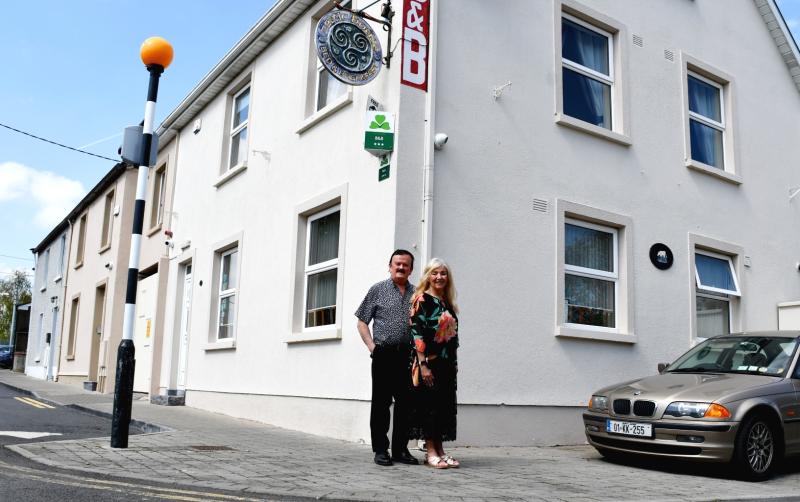 What do Daniel O’Donnell, Irene from Home and Away and Bill Gates’ sister have in common?

Well, fame aside, do you know that all have stayed as guests at Celtic House B&B on Michael Street, Kilkenny?

The real story of Celtic House however is the story of owners Angela and John Byrne, who celebrated their 50th Wedding Anniversary last month.

The couple have been running the guesthouse for many years now, and by opening their doors to guests many doors have been opened up for them.

If you happened to be glued to the television during the lockdown in March you might’ve caught the couple appearing on the St. Patrick’s Day episode of Nationwide. If you did, you probably know the next part of the story, but Angela and John tell it best.

“One evening sixteen years ago, an American man appeared at the door of Celtic House looking for a room - his name was Jim Whelan,” Angela recalls.

“He told us he was from San Diego and in Ireland retracing his roots.”

Angela, a self-taught genealogy boffin, decided to help Jim with the task herself on her home computer and within the space of a few minutes she found his relatives and even a picture of his ancestral home.

“He was filled with gratitude and couldn't believe it.”

Jim returned to America with his consolidated sense of identity but kept in constant contact with John and Angela. The following year the couple got a call they’d never forget.

Jim invited John and Angela over to San Diego to represent Ireland in what he described as “the largest St Patrick’s Day parade west of the Mississippi”.

It turned out that Jim was a big business figure in San Diego and held a lot of influence in the Irish-American community there.

“Sure we were in shock but said we would if we could,” Angela said.

“I penned a letter to then Taoiseach Bertie Ahern about the possibility and he got back to say that it’s a great honour and that we have his blessing and told us to send our regards to the Irish Congress in San Diego.”

When John and Angela got over a media storm ensued and the couple went down a treat. Angela sang 'Hail Glorious Saint Patrick' for the local cable news network and the clip went viral.

The rest, as they say, is history.

The couple went on to represent Ireland in San Diego for St. Patrick’s Day every year since, gained honorary city citizenship in the process and represented both the nation, and Kilkenny, with aplomb.

This year though, things changed, for reasons we all are too painfully aware, and despite not being able to head over to San Diego, their Nationwide appearance brought their story to national attention.

“The response to the Nationwide show has been unbelievable,” John said.

“Angela and I go on walks locally as that’s all we’ve been able to do due to the lockdown but people have been stopping us on the street to chat, they beep their horns as they pass us, giving us the nicest compliments and feedback about the show.

“We’re fourteen months closed now and we miss people. The house is so quiet. The phone doesn’t ring, the doorbell doesn’t buzz and we’ve been so busy all our lives spending time with people, looking after our guests, that now we’re at a loss to know what to do.

“A lot of our guests are returning guests, they’ve become old friends, and they usually return around the same time every year so it’s difficult to adapt to the new normal, keeping in touch via emails just isn’t the same.”

John and Angela are keen to emphasise that they owe a depth of gratitude to Jim Whelan, and share just how each guest brings their own story to the B&B, no matter how big or small.

So who else has popped their head through the door over the years?

“One of the funnier guest stays we had here was Daniel and Majella O’Donnell, Angela remembers.

“They were here filming for their B&B roadtrip series so we brought them down to Nowlan Park and played two-a-side against them. It was great craic altogether.

“Once the programme aired we had people ringing us here wanting to book the bed that Daniel had slept in. It was unbelievable.

“It was a king size bed he slept in too so people even went as far as to ask what side of the bed it was that he slept in!”

There’s more to John and Angela than just the B&B though, so much more. Their stories and talents could’ve filled the whole paper.

John, for example, hails from a farming family in Higginstown out by Clara but left Ireland for England when he was young to “seek his fortune”.

While over there he saw a chance to travel the world present itself by joining the army, so he did. He spent four years in the parachute regiment travelling around Europe before coming back to Kilkenny to work in the transport division at Smithwick’s Brewery.

While stationed in Germany John had a close shave (almost literally) when he was ambushed with a knife.

Thanks to his military training he managed to avoid getting stabbed, raised the alarm and other soldiers came to apprehended the assailant, who John emphasises was ‘twice as big’ as himself.

Angela picked up writing only in the last few years and is now an award-winning author with three historical fiction novels to her name.

One of those novels, ‘Miss Fitzgerald’, focuses on Trudy Fitzgerald, a child growing up in a post-famine Ireland.

The novel is connected to the history of the famous Fitzgerald political dynasty in America, to whom Angela discovered a direct link to through genealogy research.

Angela’s other books are entitled ‘Not Forgotten’ and ‘Homeward’ and are available to order through local bookshops, via the B&B or online on Amazon.

The couple look now to the future despite the year that was:

“We can’t wait for guests to come back in once we get the all-clear to reopen and we can't wait to give them the Celtic House welcome."