Beautiful Kilkenny sunflower field raises funds for a great cause

See more info and pictures below 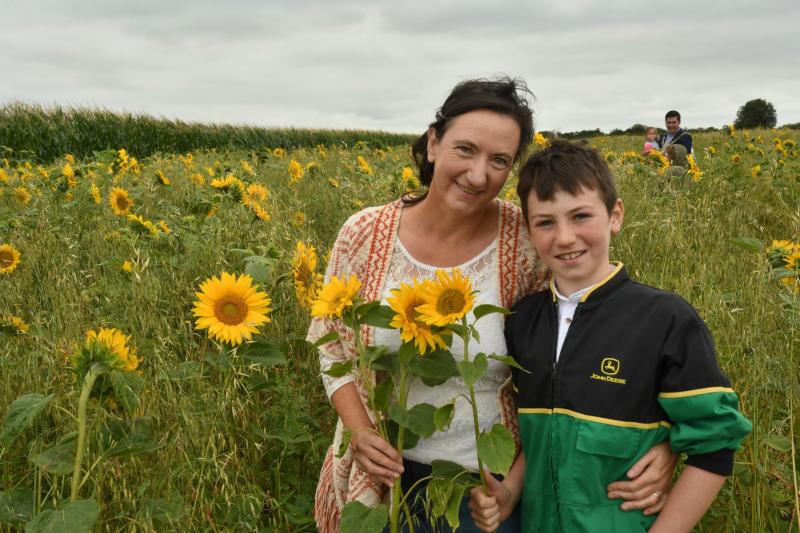 See below for link to full picture gallery

Last weekend, a beautiful sunflower field opened to the public in Kilkenny - raising funds for a great cause.

Derek Devoy, along with Philip Ireland of Philip Ireland Tyre Business Kilkenny and John Lennon of Kilbride Equestrian centre, spend many evenings and weekends meticulously planting sunflowers in one of John Lennon's fields at his farm in Kilbride.

The idea behind the growing of the sunflowers is to raise money for the umbrella charity Talk to Tom. The idea is to invite members of the public to come and pick the stunning flowers and make a donation. From the time the gates were opened on Saturday by Mayor Andrew McGuinness there was a huge stream of cars through the gates.

SEE ALL THE PICTURES FROM THE SUNFLOWER FIELD HERE

DEREK'S STORY
Local man Derek Devoy is a hero to many, he is a man who went through rough times with the many pressures of life and in his own words contemplated suicide but with the help of others he has come through that bad period in his life and today he is an inspiration to many.

Derek was a taxi driver and also a limousine to many famous musicians and others involved in the entertainment industry. From his own experience he became very aware of the moods of those he carried in his cars and most especially in his taxi. He tells his own story where “In the mornings, he got out of bed, got dressed and ready for work, but as soon as his wife and children left the house, he went back to bed again.

When his family returned home after school, Derek got up and dressed again, pretending that he had spent the whole time in his taxi, doing a day’s work. He kept up the pretence for eight months, until the bank came calling, threatening to repossess his home.

A knock on the door with a repossession threat quickly brought matters to a head, and forced Derek to admit to his family for the first time just how far he had sunk into depression. For months, he had been struggling to cope with a serious back injury, caused when a drunk driver crashed into the back of his car at a checkpoint. He underwent a number of rounds of surgery, but said that after each operation, his mental health worsened. He go lower and lower and spent his days in bed, crying. Faced with losing his family home, he said he started to think his wife and children would be ‘better off without me’ and made three attempts at suicide.

The morning after his third attempt, he contacted his doctor and finally asked for help to deal with his depression. Eventually, with medical treatment and counselling, Derek was able to return work. But on his first night back in his taxi, he saw a distressed man on a bridge in Kilkenny. He stopped his cab and spoke to the stranger, asking him why he was trying to kill himself.

SEE ALL THE PICTURES FROM THE SUNFLOWER FIELD HERE

He was able to use his own personal experience to help the suicidal man. He decided to undergo training, and completed the Applied Suicide Intervention Skills Training (ASIST) course. Knowing that other taxi drivers must have seen similar sights, he encouraged 15 of his work colleagues to do the course. The then mayor of Kilkenny allowed them to use his council chamber as a training centre. The venture became known as Taxi Watch, which since its foundation in 2014 has directly intervened in almost 200 suicide attempts. Since that time Taxi Watch has spread throughout the island and also into parts of the UK.

Find how you can help out by going to their website and join the Talk To Tom team today.  Everyone can volunteer with Talk To Tom with roles to suit all interests and skills. Opportunities can range from helping with fundraising events to offering your specialist services - to help us keep the bills lower.

For example, if you are a tradesperson you can assist with the maintenance of their centres and stores to help keep the lights on. If numbers are your game you can help balance the books.  Legal Eagles can help with those pesky forms. Or if you have a way with people why not volunteer for a community outreach programme.