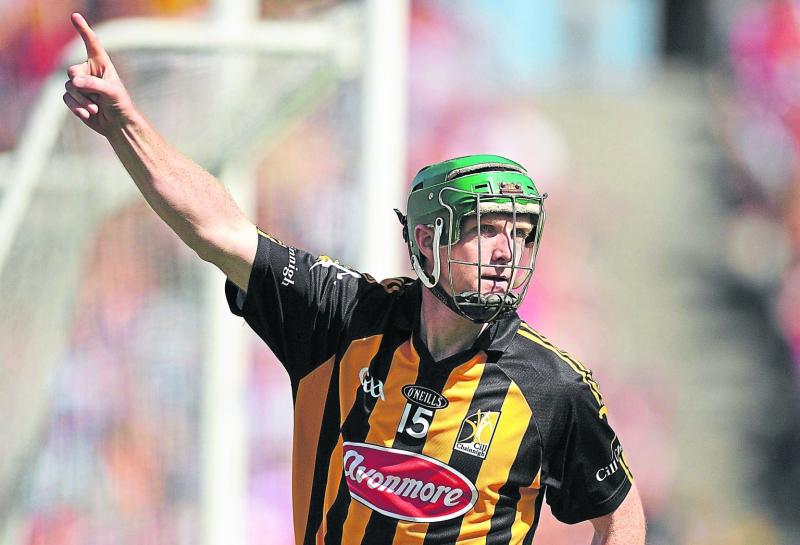 Henry Shefflin celebrates after scoring Kilkenny’s first goal in the 2010 Leinster final. The Galway manager will be hoping for a different outcome this weekend. Picture: David Maher/SPORTSFILE

Saturday’s final will be the seventh meeting, of which the Tribesmen have won just twice in 2011 and after a replay in 2018.

The following is an excerpt from John Knox’s People Sport report from that history-making first final in 2010:

“The four in-a-row All-Ireland winners beat down and all but dismantled good National League champions, Galway on the way to a pretty convincing sixth Leinster final win in succession.

Galway were full of ideas and running during the opening half. In the latter part of it they put a lot of hardship on, and troubled the opposition.

In fact, there was a time nearing half-time when looking at ruffled Kilkenny I remember think all the would be pretenders to the crown will be emboldened, sniffing a weakness, the blood of the champions.

The Cats regrouped with hard to credit force during break. During the next 22 minutes they bamboozled the opposition, restricted them to a single point as they opened out a match winning lead of 1-16 to 1-6.

This was powerful hurling. This was hurling that told all would-be challengers that no matter how long or hard the road Kilkenny have travelled that they are not yet satisfied with the destination, or destinations, they have reached.

In the end Kilkenny were winners by seven points, having run up a hefty 17 wides. The tally of misses brought to 36 the number of wides registered in two games.

Kilkenny manager Brian Cody wasn’t a bit bothered as he looked towards another All-Ireland semi-final. That will be in Croke Park on August 8 against as yet unknown opponents.

“The misses wouldn’t concern me,” admitted Mr Cody. “What they tell me is that we are creating chances, and lots of them. I look forward to the day when we convert a greater percentage of them.”

There was another important factor brought into play here. Kilkenny dipped into the panel as deep as their 19th man.

“This was a victory for the strength of our panel,” Mr Cody beamed.

How right he was!

Centre-back Brian Hogan injured his hand during the opening half and John Tennyson went in as a blood sub. The Carrickshock man was never asked to come out.

Tennyson helped drive Kilkenny through the tempest mounted by Galway. Subsequently he was a powerful main beam in a defence that sparkled.

The selectors have a serious decision to make regarding this position before the semi-final! The ideal way to have things.
At the other end of the field Aidan Fogarty and that trickster with the near perfect touch, Richie Hogan, bolstered the attack when it needed a bit of a lift. The seamless way they slotted into the game plan, full of running and self assurance, was most reassuring.

Things like that are important in the scary high wire, no safety net circus that is the All-Ireland series.

Beside there were some awesome performers. JJ Delaney was absolutely wonderful. Four minutes from the end he fielded a Galway puck-out over the head of his opponent as casually as you would pick an apple from a tree.

The Kilkenny crowd rose as one to acclaim a magical moment. It was the perfect end to a perfect day.

Tommy Walsh - sure what’s new? - and Jackie Tyrrell were another pair of outstanding performers in defence. Some days they seem capable of winning virtually 99% of the ball they contest. You can be sure, once they have it in hand, the ball will be posted to a destination to trouble the opposition.

In midfield Kilkenny were supreme. Michael Fennelly looked capable of charging through stone walls such was the force in his game during the opening half. At last, at last, he brought his driving, driving, driving club form on to the intercounty stage.

His partner, Michael Rice won some hard ball, and then distributing it adroitly. He collected two neat points into the bargain.

Rice won serious credits in the All-Star ratings with the force of this showing.

Team captain TJ Reid and Richie Power were probably the two top men in the front line, besides Henry Shefflin, who has the magician’s gift for making something out of nothing. The goal he scored was typical. One split second there was nothing there; the next the ball was in the Galway net. Deadly!

Subs: E Lynch for A Cullinane, C Donnellan for A Callanan, K Hynes for Farragher.