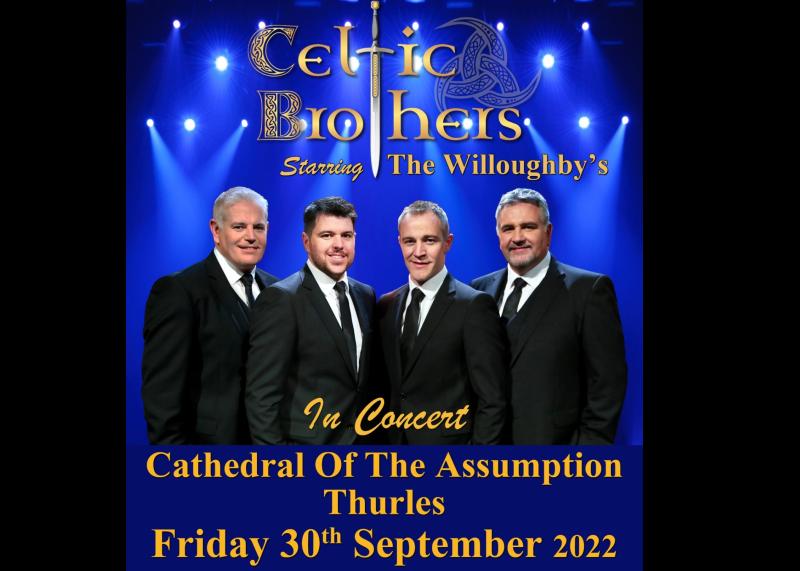 Thurles parish is preparing to welcome the renowned Celtic Brothers (formerly known as the Willoughby Brothers) to the Cathedral of the Assumption as part of the bid to replace the roof on the famed and iconic building in Thurles.

This will be the first such fundraising event for the Raise the Roof project since early March 2020n and it follows on from other successful ventures including the hosting of Phil Coulter and the Priests in the Cathedral, and Patrick Feeney and James Kilbane in St Joseph and St Brigid’s Church, Bóthar na Naomh.

Described as being a new and exciting act, ‘Celtic Brothers’  was born of the very successful and popular group known as the ‘The Willoughby Brothers’. They have entertained and endeared audiences for the past number of years and are delighted to bring their newly evolved show to their loyal and valued followers.

Their unique and recognisable sound includes a repertoire featuring a blend of Irish ballads, popular classics and contemporary songs that take their audience on an emotive musical journey.

They have made a big impression on the national and international music scene with appearances on a number of TV and Radio shows and are regularly play listed on RTE Radio 1. In 2013 they performed the title song at the Rose of Tralee International Festival before a live TV audience of 1.2 million and have also made appearances on RTE’s ‘Up For The Match’, the ‘Derek Mooney Show’ and the ‘John Murray Show’ on Radio 1.

They have had the honour of performing at Arás an Uachtaráin by invitation of President Michael D. Higgins and at the home of the GAA in Croke Park at the All-Ireland hurling final.

The have toured extensively in Ireland, the US and the UK. Their passion for singing and performing, combined with a genuine closeness, stems from a childhood filled with music and singing, a love they carried with them throughout the years and into adulthood. This new act is fresh, talented and has universal appeal.

Tickets for the event on Friday September 30, are now available  in the Parish Office, Cathedral Street and Bookworm, Liberty Square. Ticket Donation: €30.

All proceeds towards the Cathedral “Raise the Roof” Project. Please support this very worthwhile project and enjoy a great evening of entertainment.