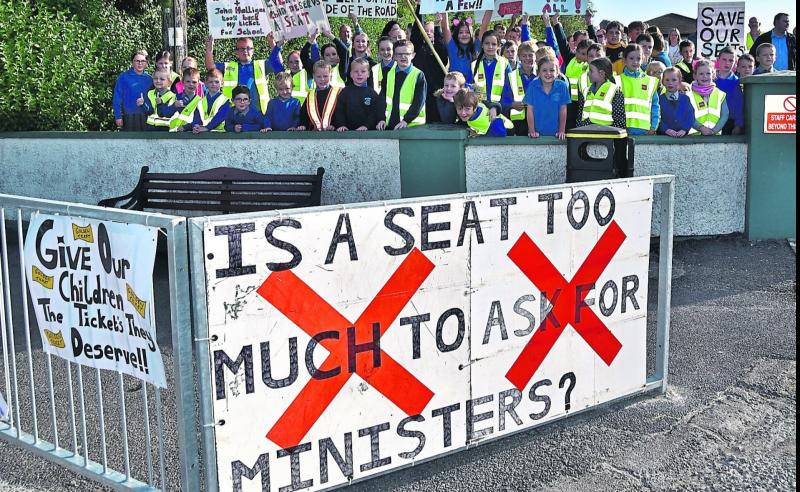 The issue of students being left with no seat on the bus has come up every August in recent years. Pictured here is a protest in Ballyhale over the shortage of bus places in 2018

Kilkenny parents have been left anxious and angry after their children were told there was no place on a bus to school days out from the beginning of the new term, despite having had a place in previous years.

They have been venting their frustrations and hoping for a resolution to the matter. In some cases, parents are working early in the morning and do not have an alternative way to get students to school.

Local councillor Denis Hynes says there are more than 30 families affected in the Gowran area alone, where up to 41 students currently have no seat. The Sinn Fein councillor met some of the families last week, and then met representatives of CIE, and was advised that the reason for this was because despite attending city schools, technically the closest school to them was in Bagenalstown.

For some students' homes, the difference in distance between Bagenalstown and the city is less than 2km. Cllr Hynes says that a bus to Bagenalstown or Kilkenny can be made available if the Department approves it, but until that approval is forthcoming, everything is in limbo.

“The majority of these students are entering their last two years of secondary school so would have had a bus ticket for the last four years-plus,” Cllr Hynes said.

The Sinn Fein representative says that in 2005, when the secondary school was closed in Goresbridge, an assurance was given that a bus would be provided to all the families in the area of Gowran, Goresbridge and Paulstown if they required a seat other than to Borris VEC.

“One woman is working in Carlow, and it is absolutely impossible to bring a student to school and be in work for 8am, going in the opposite direction,” he says.

Cllr Hynes also points out that the situation as it stands clearly does not lend itself to promoting the use of sustainable public transport — and even if tenable would simply add vehicular traffic to the road.

“Failure to address this desperate situation will result in parents having to give up their jobs and a further 30 cars on the road travelling in and out of Kilkenny twice a day,” he says.

“The families in our area are seeking that the Department approve the need for an additional bus from Gowran to Kilkenny. They want the Government to stand by the agreement they made in 2005.”

The issue of a lack of schoolbus places has come up repeatedly in recent years, with protests taking place in Ballyhale in 2018 over the number of children left with no seat.