Divining water for over 50 years in Kilkenny and across Ireland 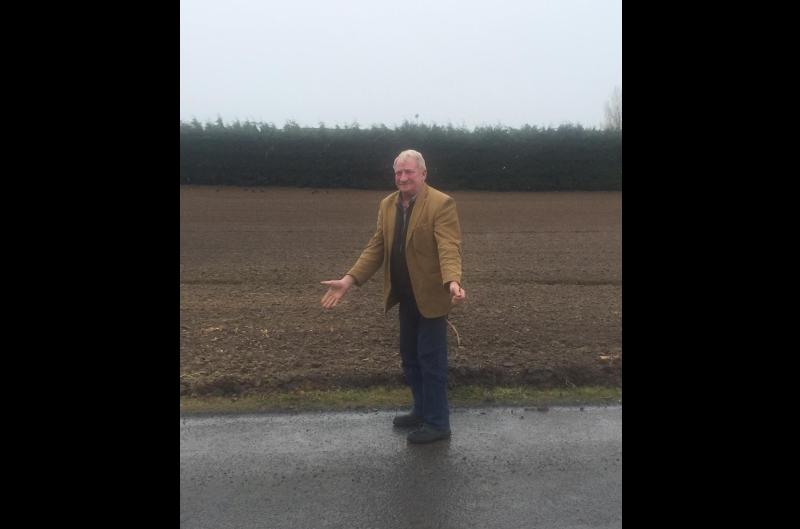 Tom Young with his divining rod which is a laurel stick

In our  modern age it is hard to believe that the art of divining  for water remains in-demand. Yet Tom Young, a Tipperary  man in his seventies who has been divining for over 50 years, remains busier than ever.

Divining is generally performed with a Y shaped stick or rod, (Toms prefers a laurel stick) which is held in each hand with the stem or Y pointing ahead. The diviner walks the land and the rod  dips or twitches when water is found.

Tom says: 'I can tell the difference of a good well and bad well' depending on the strength of the energy in the rod. The vibration off the water is 'incredible': he compares it to the strength of an electric shock and says that while he loves his work, it can also be very physically draining. Once he locates water he explains that "It catches my breath ... I wouldn't be able to talk for a couple of seconds.

"It takes a lot of energy out of you."

Divining for water is an ancient skill that goes back 'thousands and thousands of years' according to Tom. He explains that the Native Americans used divining to locate water on the prairies. In America too all the first oil wells were located by using traditional diviners.

It has also been used to locate buried metals, ores and gemstones. Elizabeth I brought diviners from Germany to the UK to locate copper and tin in Devon and Cornwall. Tom’s twin brother, is a qualified geologist in Alaska and is very 'accurate' at finding gold, so he might have some divining skills too.

Tom inherited the ability from his grandfather. The ability often skips a generation so while Tom’s own children don’t have his skill for finding water he believes that some of his grandchildren will.

His clients today include farmers, horse breeders (he has found 14 wells for Coolmore Stud) and people building homes. He works regularly in North Kilkenny particularly around Paulstown and Castlecomer.

Tom’s success rate is exceptional: "To be honest with you, I have an incredible record. I never fail really."

Along with drier summers and less rainfall, he explains that dairy herds now are much larger and due to a larger population, demand from private homes is up too.

As a nation we are using more water and need to be aware that we are now perhaps using 'too much water'.

He says large dairy herds of up to 800 cattle use phenomenal amounts of water, observing: "The dairy men use an awful lot of water."

In exceptional cases Tom has found water at a depth of 1000 feet but generally it is up to 400 feet down in many areas. In the early days of his water sourcing, it was generally found 150 feet below ground. Despite advances in modern technology and machinery Tom still has confidence in his methods. In his opinion "The traditional skill is way ahead of the new technologies."

He says that we should take care not to waste water and be mindful that it is a limited resource. In his opinion, the proposed water charges that were  abandoned should have been left standing. He notes that when 'there is a little bit of a bill on it', we appreciate things more.

Tom, he will keep going as long as he can. He says "Until I'm going into the box, I won't retire until I have to. While I'm able to move around and go around, I'll stay doing it - I get great enjoyment out of it."

His skill may be tapping into unknown forces or some kind of cosmic consciousness, but Tom Young remains a totally down to earth type.