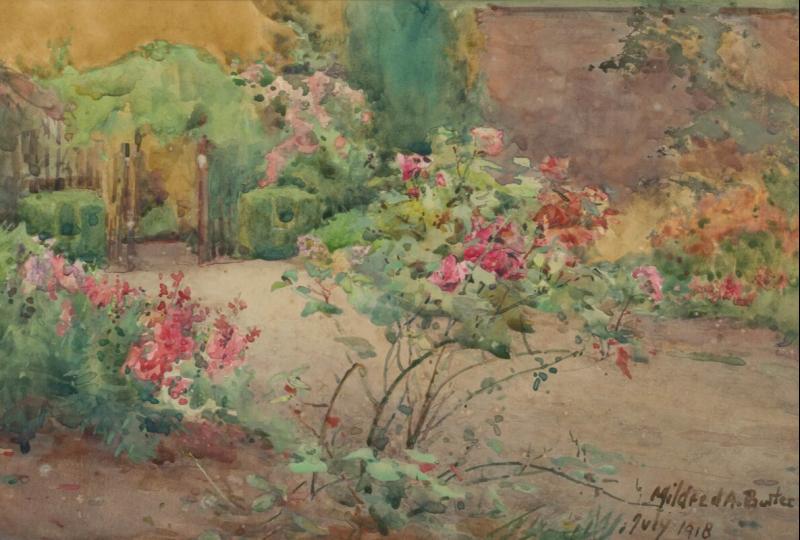 A Bit of the Garden by Mildred Ann Butler Photo: The Butler Gallery

A lecture titled 'Kilkenny Women Artists' is scheduled to take place on September 28 at Kilkenny Archaeological Society at 8:00pm. The talk by Catherine Marshall will cover the careers of female Kilkenny artists from Mildred Anne Butler and her peers to contemporary artists working today.

Catherine Marshall is a respected curator and art historian who has lectured in art history at Trinity College Dublin, the National College of Art and Design and University College Dublin. As founding head of collections at the Irish Museum of Modern Art she curated exhibitions of outsider art from the Musgrave Kinley Collection, exhibitions of Irish art in China, USA and the UK and throughout Ireland with the IMMA National Programme.

She was also curator to the Engagement project, which brought together artists from the Kilkenny Collective for Arts Talent, Callan, (KCAT) with artists from widely differing mainstream practices for a series of exhibitions between 2013 and 2021. In 2019 she was recipient of the first honorary doctorate in the History of Art from University College Dublin.

As a proud  Kilkenny native now living in Dublin, Catherine is delighted to be delivering her lecture at KAS. She says: “I’m Kilkenny born and bred and all my ancestors are rooted all over County Kilkenny … they never left it, they never emigrated, Kilkenny sustained them.”

The lecture at KAS will be an opportunity to explore the lives and work of women artists from Kilkenny who have made an impact on the visual arts and also been influenced by their homeplace (adopted or native) of Kilkenny.  Catherine will cover in her lecture a range of creatives spanning notable watercolourist Mildred Ann Butler, Dutch ceramicist Sonia Landweer (who spent over 40 years living in Thomastown before her death in 2019) and contemporary artists Lorna Corrigan and Mary Cody of KCAT in Callan.

Catherine, while respecting the legacy of Mildred Ann Butler, doesn’t want the talk to focus entirely on her as she sees Kilkenny as  a place rich with creative energy from many different artists. She says while Mildred Ann Butler may be 'the most significant of the watercolour women painters from Kilkenny at the turn of the last century, she is by no means the most significant Kilkenny woman artist.'

“I would like to talk about not just her and one or two others from her period but also from contemporary artists like Sonia Landweer, not Irish for instance, but lived here and in Kilkenny for most of her professional life. …. She was internationally renowned for what she did whereas Mildred Ann Butler wasn’t even really known in Kilkenny as a painter until after her death.”

She acknowledges that Mildred Ann Butler 'was a wonderful painter …. but she operated as a very discreet woman who painted as a hobby'. Catherine continues: “She  gave herself to it full time but she didn't get out there and market it or create a critical dialogue around it in the way any artist who wants to make a living out of art would do. Of course she didn’t need to make a living out of it."

Mildred Ann Butler was the youngest daughter of Captain Henry Butler of Kilmurry House in Thomastown and a painter who specialised in watercolour landscapes and plein air portrayals of animals, flowers and domestic life on her family’s estate. Patrons included Queen Mary of Teck (the wife of George V). She was a member of the Royal Society of Lady Artists and of the Royal Watercolour Society.

Butler  was heavily influenced by the Kilkenny countryside, her paintings of birds in particular being skilled and sensitive. She travelled regularly to the continent including to Paris where she studied life drawing, figure drawing and fine art painting. She was a contemporary of Walter Osbourne and Sir John Lavery but would have had a privileged but restricted life when compared to them. In her era and amongst her social class art was seen as an accomplishment rather than a career. Her work features in the Tate Gallery, the National Gallery of Ireland, the Ulster Museum and the Hugh Lane Gallery.

Catherine outlines that “Kilkenny has a huge history that operates at every level." She explains how there’s also been 'a very strong creative drive from within the native community in Kilkenny'. She cites the Butler Gallery as a major  influence on the artistic vibrancy of Kilkenny. The gallery fittingly has a Mildred Ann Butler piece in their collection, A Bit of the Garden which dates from 1918.

Sonia Landweer by comparison was a Dutch artist, born in 1933 who came to Kilkenny in 1965 to revitalise Irish craft and design at the ceramic studio at the Kilkenny Design Workshop. She had an extremely innovative practice that encompassed jewellery, body sculpture, bronze and  ceramics. She was particularly noted for her unique patinations, innovative glazing and subtle forms.

Like Mildred Ann Butler she enjoyed a close relationship with the natural world using motifs such as seed and plant forms alongside a diverse range of materials including beads, slate, wood, paper, feathers and other fibres in her creative work. Unlike Butler she was not a traditionalist, pushing ceramics beyond its functional origins and the boundaries of personal adornment beyond beauty with her dramatic body art  and jewellery. She enjoyed three retrospectives in Ireland in Visual Carlow (2011), the National Craft Gallery (2004) and Designyard Dublin (2002).

Her work is collected internationally and features in the Frans Hal Museum in Haarlem, the Museum of Decorative Arts in Copenhagen and the Ulster Museum. She and her husband Barrie Cooke were also co-founders of Kilkenny Arts Week.

Catherine’s talk will also touch on other Kilkenny figures including the botanic artist and gardener, Charlotte Wheeler Cuffe, Susan Butler, (wife of the author Hubert Butler) and Helen Pennyfeather, who were founding members of the Kilkenny Art Gallery Society, and contemporary artists Helen Comerford and Helena Gorey .

It promises to be an event not to miss for Kilkenny art lovers.