‘Good people understand one another’ 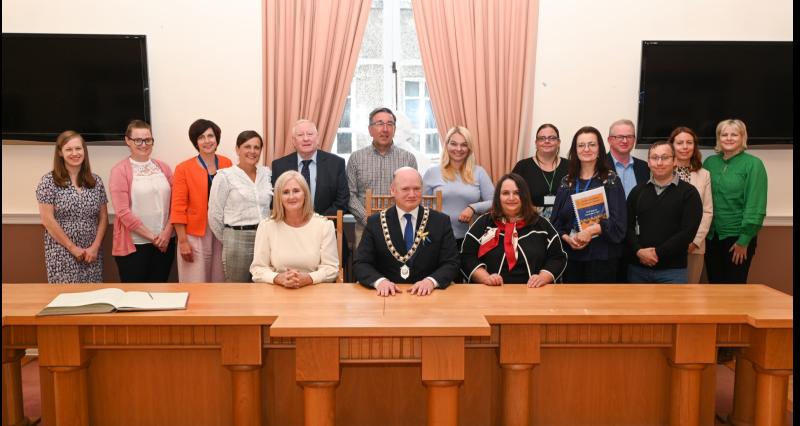 Fiona Deegan, Mayor David Fitzgerald, Her Excellency Larysa Gerasko and members of Kilkenny groups who have co-operated on the Ukrainian emergency

On September 15, Her Excellency Larysa Gerasko visited Kilkenny to learn about how the community here has provided refuge for hundreds of her displaced fellow Ukrainian citizens since the outbreak of war. Ms Gerasko was welcomed to Kilkenny by Lord Mayor David Fitzgerald on the steps of the Town Hall and then escorted to the Mayor’s Chamber where the people responsible for managing Kilkenny’s response to the crisis briefed her on the support provided to Ukrainians forced to flee their country.

On opening the gathering, Mayor Fitzgerald described how Kilkenny had dug deep to rise to a unique situation. Calling current circumstances both a 'challenge for the Ukrainian nation and a challenge for Ireland' he went on to praise the Ukrainian community for its 'positivity, commendable spirit and support to fellow countrymen'.

Next Fiona Deegan, Manager of the Displaced Ukrainian Persons situation addressed the audience and the ambassador about the logistics of assisting and integrating Ukrainian people into the local community. She outlined how there are currently 47 to 48,000 Ukrainians in Ireland with 843 people arriving daily. Seven thousand of these are in publicly provided accommodation nationally, which has represented a huge logistical challenge. There are now 830 Ukrainians in Kilkenny County (possibly more as those in private accommodation may not be known to  service providers) with 130 people living in temporary accommodation at the St John of God Convent in Kilkenny City.

Ms Deegan praised and thanked all the agencies involved in the campaign to assist and integrate Ukrainians into Kilkenny life. She then opened the floor to the service providers  who were invited to speak to the ambassador.

Each took their turn describing their organisation’s work in assisting the displaced Ukrainians who have been arriving in Kilkenny since last March. Seamus Nugent spoke of the Kilkenny Recreational and Sports Partnership’s work to address the 'personal trauma and hurt on a real level' of the Ukrainians and their children via rehabilitation through sports clubs, exercise classes  and play. Annie Kinchella of the First Kilkenny Scout Group recalled how on March 18, she received the call to put in place temporary accommodation for the Ukrainian 'guests' and rushed to address basic needs with camp beds, care packs, clothing and towels.

Next Jackie Meally of Local Link spoke of how they have provided vital transport links to the Ukrainian community especially those living in rural settings saying it  was 'a pleasure to be part of this whole network'. Katherine Peacock of the Civil Defence explained how her organisation had played a 'strategic and important role' with 45 volunteers and 2 staff who cooperated on the crisis. Katherine praised the response of Kilkenny people in donating beds and other necessities to the new arrivals, stating that the Civil Defence played a major role but 'that everyone in Kilkenny helped'. She said that since those early days in March she had made 'really good friends' in the Ukrainian community and hoped to visit the county one day.

Two of the most striking speakers were Ukrainians Tetiana Kushchyk and Julia Duras who have been in Kilkenny since the spring. Tetiana said of her community: “We are sort of a small army.” She described her work with local radio station KCLR in creating an information hub for Ukrainians in the virtual space with practical advice about shopping, English classes and bus services. She said he is passionate about linking the Irish and Ukrainian  communities and addressing issues of integration while encouraging debate as the needs of her community evolve.

Julia Duras now working with Kilkenny Leader Partnership, recalled how she came to Kilkenny with her son. Her family remains in Ukraine with both her brother and her father in law in the army. She has only been speaking English since April but was adept at expressing her gratitude especially to her 'fabulous, fantastic host family'. She compared Kilkenny to Lviv in Ukraine and while she acknowledged the 'dark times'  that Ukrainians are experiencing, enthused that, “Here in Kilkenny, there are real shiny people.”

Moira Duggan, Group Leader with Kilkenny Leader Partnership outlined how they had moved from addressing the immediate needs of the Ukrainians to creating a social inclusion team to integrate and provide information. She has worked with the HSE and the DSP to coordinate a collective response and to make services more accessible, describing the collaboration between all agencies as 'fantastic'.  She particularly praised Ayrfield Medical Centre who were 'excellent' in the early stages for assisting with medical appointments. The Partnership has also helped with CV preparation, job interviews and liaising with employers. Moira praised the Ukrainians for their spirit and independence emphasising that they 'want to get themselves up and running themselves'.

Next Gillian Kelly of the HSE outlined how they have established a dedicated clinic that is held three times weekly while also helping Ukrainians navigate an alien medical system very different to their own. Julieann Hickey of Kilkenny County Childcare Committee explained how they have facilitated access to preschool and childcare for the community. A particular success was a recent play and music session for children of four and under, which they hope to establish as a regular event.

Declan Gibbons of Kilkenny Community Radio described how the station had organised an aid appeal which sent items to Ukraine earlier this year and had also dedicated programmes to the Ukrainian community. The station plans to send more aid in the future.

Selena Grace of the Kilkenny Volunteer Sector described how they had mobilised volunteers to coordinate the Sunflower Shop on John Street while also providing support services including language supports. Now, Ukrainians themselves are volunteering and running the shop which acts as a hub for the Ukrainian community in Kilkenny.

Rita McGarvey and Eamon Hoare of Kilkenny County Council both outlined their work regarding sourcing and vetting accommodation, while Bernadette O’Rourke of  Kilkenny Carlow ETB described how they are providing language classes to 444 adults as well as other further education options. Managing the different levels of need requires skill and flexibility, she explained.

On hearing of all these collaborative efforts, Ms Gerasko expressed her deep gratitude to the people of Kilkenny and the wider Irish nations saying that the response had been 'huge from the first day of the invasion'.  While acknowledging that this is 'the darkest time for Ukraine', she said she was confident that Ukraine would win the war with the help and support of  their partners. She also expressed the hope that the 'Irish and the Ukrainians will enrich each other.'

Later in the day, the ambassador met members of the Ukrainian community at the St John of God Convent and the Sunflower Shop on John’s Street. At the end of a long and emotional day, she again expressed her gratitude to the people of Kilkenny, observing that "Good people understand one another."