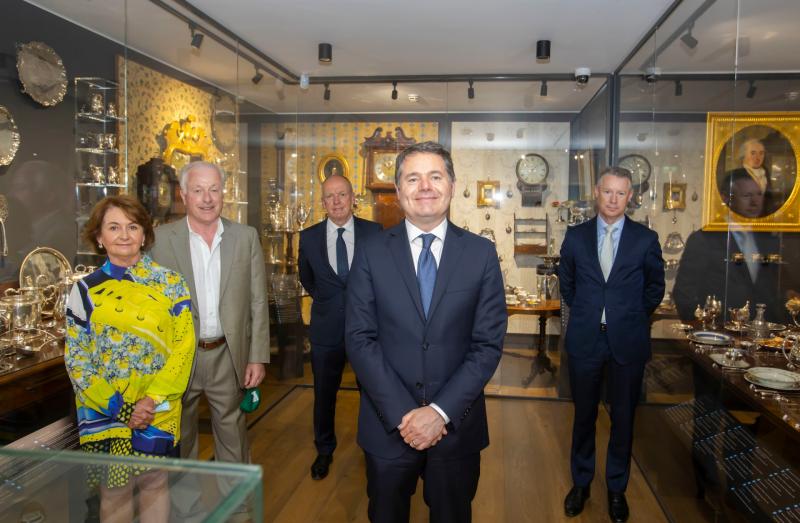 The team at Waterford Treasures, Five Museums in Waterford’s Viking Triangle, has been informed by Senator John Cummins, that the Minister for Finance Paschal Donohoe has approved two further donations to the Irish Silver Museum in Waterford.

One of the donations is valued at €850,000 and the second donation valued at €750,000. These donations will ensure that the Irish Silver Museum in Waterford will have one of the largest collections of antique Irish silver in the world and will be the only museum in the world dedicated solely to celebrating the virtuoso craftsmen and women who over the centuries produced magnificent works of art in silver.

Minister Donohoe opened the Irish Silver Museum in June this year in the presence of Noel Frisby (Mullinavat) and Stephanie Frisby, two local philanthropists, who financed the transformation of the former Motor Tax office on the ground floor of the Deanery into a must-visit celebration of Irish craft.

The two new donations together with earlier donations of furniture, paintings and other relevant and complementary museum objects will allow Waterford Treasures expand the displays in the Deanery as soon as suitable office accommodation can be secured and thus making it possible to create museum galleries in the upper floors of the Deanery.

Mr McEneaney also thanked the Executive in Waterford City and County Council, and the Board of the Museum for their enormous support for the development of the cultural offering in the Viking Triangle. Since opening in May this year the public reaction to the Irish Museum of Time has been phenomenal with over 36,000 fee-paying visitors. Mr McEneaney added that a critical mass of cultural attractions has been developed in the Viking Triangle thus giving Waterford the unique distinction of having the only dedicated museum quarter in Ireland.

International interest in the museum has been very encouraging with an early booking for 2022 of over thirty visitors from the Belgian Silver Society who will be over-nighting in the Granville Hotel in the city.