Councillors endorse concept but have design reservations on new statues 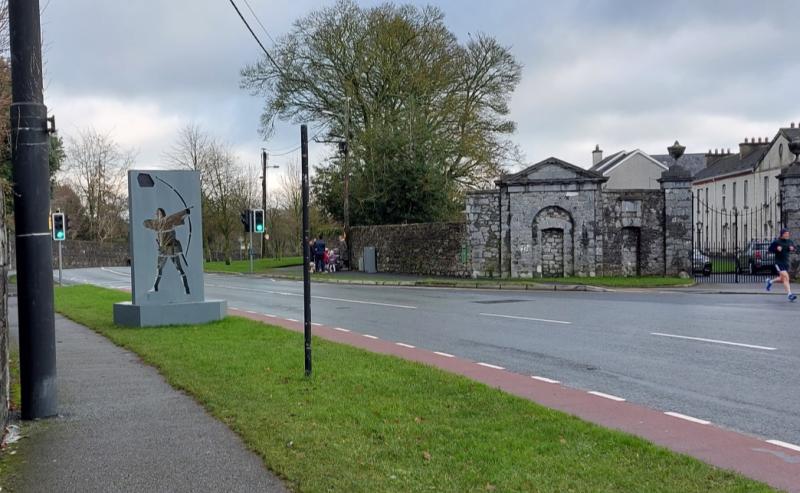 A new 'cutout-style' statue of an archer on Castle Road

A new 'cutout-style' statue of an archer on one of the main roads into Kilkenny City has garnered a mixed reaction from local councillors, with one describing it as ‘a little bit English-looking’, and another warning against the ‘disneyfication’ of Kilkenny.

The sculpture, on the Castle Road, is the first of a variety due to be erected on some of the main routes into the city. They are intended to alert motorists they are arriving into the city limits in tandem with traffic-calming measures. This first particular piece is located close to Archer’s Avenue in an area known for its history of archery.

However, while city councillors have given their backing to the concept, a number flagged concerns over the design of the pieces. At the December meeting of Kilkenny City Municipal District, Cllr David Fitzgerald (FG) said he was concerned the new archer sculpture ‘looked a bit English’.

“It reminds me of something you would see coming into somewhere like York,” he said.

Cllr Eugene McGuinness (IND) said he felt the piece was quite 'modern-looking', but overall the idea was a good one to welcome people into the city.

Cllr Maria Dollard (Green) said the feedback she had received was that the council was looking at something to control speed and let people know they were coming into a 30km/h zone. She agreed the idea was positive, but said there were some concerns that Kilkenny was under going a ‘disneyfication’.

“A witch on a broomstick is a disneyfication of a witch,” she said.

Cllr Dollard called for a ‘deeper dive into our history’ to ensure the pieces do not ‘look like something lifted out of an English town’.

Cllr John Coonan (FF) said he thought the concept was meeting councillors’ favour, generally speaking, including the piece on top of Castle Road. He said it was good to see a city demarcation and it was getting a positive public response, suggesting Irish-specific themes, including Cú Chulainn who he said ‘had a stick and ball’.

City engineer Ian Gardner said it was important to make clear the pieces were part of traffic calming features and a Part 8 planning consultation would be included. He said more detail could be ironed out at this stage.

“There will be about five or six ‘gateway’ locations where we are looking at theses sculptures,” he said.

Mr Gardner also informed members the cost of the project to the council would be minimal as there was Government funding available and Active Travel was very interested in supporting it also.