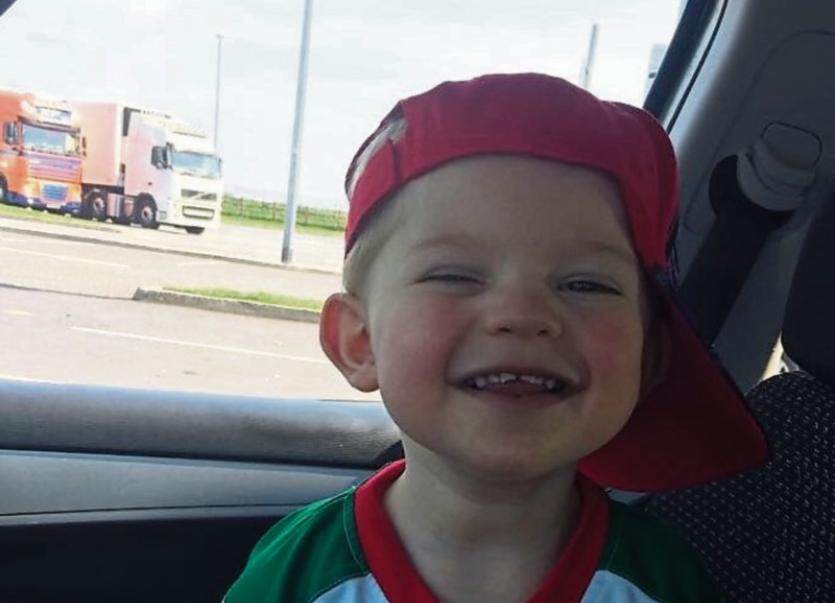 Harry full of smiles despite his serious health issues.

A brave little boy from Freshford is preparing to have his third open heart surgery at the age of just two.

Harry Hughes went into cardiac arrest when he was just four days old and had his first heart surgery at eight days old, his second at just three months old.

Despite his serious illness Harry is a mischievous little boy, whose failing heart is filled with a love of life.

As he heads into the third heart operation of his young life, Harry’s friends and community are rallying around to help his family with some of the costs associated with making their lives easier and ensuring Harry gets all the care he needs.

Each stage of Harry’s life and treatment is very expensive, much more money than his parents and family have, so a Go Fund Me page has been set up to help Harry and his family with the costs surrounding giving him the best care and support.

The local community will also show their support with a Truck and Tractor Run in the coming weeks - an event Harry is sure to enjoy as his grandad is a trucker and Harry just loves the big horns and anything that can make 'fast' noises!

He had the first of his palliative surgeries when he was eight days old, which was the Norwood with Sano shunt. He had the second surgery at three months old which was the Bidirectional Glenn shunt.

Harry had a seizure a few days after his Glenn, and an EEG and other tests showed he’d had two bleeds on the brain. He was left with weakness down his left side, later diagnosed as mild Cerebral Palsy.

Now Harry is starting the journey again and heading towards his third open heart palliative surgery - the Fontan. This next surgery will allow him some semblance of normal life. Providing him with the circulation his body needs to survive.

After this there are no more planned surgeries, Harry and his family will have to wait until he needs more minor surgeries or even a heart transplant, in the coming years.

Harry’s parents and family go without constantly to ensure he has all that is needed to look after him and his condition. However it is always an uphill struggle and now is the the time to ask for more help as he prepares for his next open heart surgery. It will allow his mum, dad and eight year-old sister to stay as connected as possible during this time not have a financial burden on their shoulders.

The Truck and Tractor Run for Harry will take place on Sunday, September 30.

Entry is €25 per vehicle and registration is from 11am at Freshford Village Hall.

The drive begins at 1pm and will leave Freshford for ThreeCastles, then on to Ardloo Road, Ballyragget, Durrow, Johnstown and then back in to Freshford.

If you can't attend but would like to support Harry you can make a donation to the Go Fund Me campaign. Go to gofundme.com/heros-for-harry