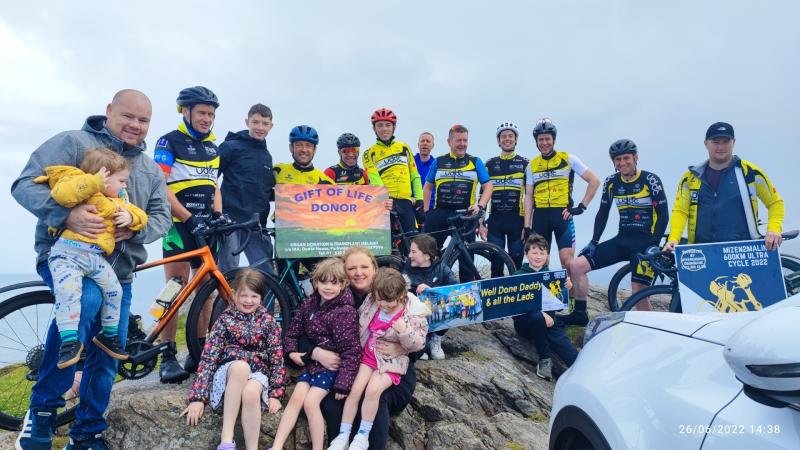 Seven hardy men, including one from Kilkenny, fought their best fight against 'brutal' weather conditions which showed them no mercy to complete a 600km cycle challenge within 24 hours from Mizen2Malin - and all with a half hour to spare.

Setting out from Mizen Head at Ireland's most southerly point on Saturday, June 25, at 3pm they could never have imagined how their resolve would have been tested by consistent rain and wind all the way until they wheeled up, weather beaten but victorious, at Malin Head at the tip of Donegal at 2.30pm on Sunday.

Months of preparation and intensive training went into the 24 hour challenge which included 4,000 meters of elevation for the seven members of Tipperary's Upperchurch Drombane Cycling Club. Their goal was to raise as much money as possible for the Tipperary Branch of the Irish Kidney Association. By the time they crossed the finish line, the seven cyclists, one of them a kidney patient, had raised over €16,000 for the charity.

James Tobin, an actuary, who lives in Urlingford, was part of the cycling team supporting kidney patient Francis Hogan, who is from Templemore in Tipperary. The seven men and their travelling supporting team were greeted in a wet an blustery Malin Head by a welcoming party of family, friends including local dialysis patient John Hegarty (36) with his wife Mary and their four young children, Ella (age 7), Erin (4), Ada (3) and Ronan (1). For nearly 8 years, John has been making a two hour rund trip three times a week to Letterkenny for life saving haemodialysis treatment.

Hogan, age 45, said the weather was brutal and they really were losing faith on being able to complete the challenge.

"While we felt fit for the challenge, we never envisaged the weather being so harsh from the time we set out, right through the night and into Sunday afternoon," he said.

"We pushed the hardest that any of us have ever done before. We couldn't have done it without our supporters and the team that travelled by van guiding us along with words of encouragement and making sure we were fed and watered and had numerous changes of clothes. Supporters dotted along the long route on countryroads, and in towns and villages, provided a welcome boost to our resolve also.

"Our stop in Borris Hill was a godsend,  with supporters setting up a marquee and heaters for us with warm food and refreshments. It felt like a 5 star hotel and gave us time to re energise and focus on our goal and knowing that donations kept pouring in from so many generous supporters, individuals and companies, this goodwill spurred us on.

"Now that the journey is over, we are proud of our massive achievement made possible by everyone that came behind us and in particular our club Upperchurch Drombane. the seven of us are looking forward, as part of our recovery, going to  the leisure centre at the Red Castle Hotel, on the Inishowen Peninsula and later tonight having a nice meal there along with family, friends and supporters".

Taking part in the Mizen 2 Malin Challenge along with James were David Russell, an award winning young farmer from Thurles, as well as father and son David and Jamie Donovan, also from Thurles,  along with  building contractor Seamus Duggan, from Templemore, farmer Pat Heffernan from Moyglass, Fethard, and self employed kidney patient Francis Hogan from Templemore.

Cyclist Francis Hogan,  a father of five children, was diagnosed with Polycystic Kidney Disease (PKD), a hereditary condition. when he was in his early twenties. Through careful medical intervention and medication and healthy lifestyle choices, including dietary and fitness, he has slowed down the progression of his disease and he now has 25% kidney function. Francis is a strong advocate for fitness in aiding a person’s physical and emotional wellbeing. In 2001 Francis’s late father Gus, who also shared the same hereditary kidney condition, passed away in hospital, at the young age of 49, with heart failure just a day after undergoing a kidney transplant.

Sending good wishes from Tipperary was Orla Hogan, the Secretary of the Tipperary Branch of the Irish Kidney Association.

“We have huge admiration and appreciation to Upperchurch Drombane Cycling Club and these seven men who are truly magnificent for undertaking this gruelling challenge which was made all the more difficult by unrelenting bad weather, to support the work of the Irish Kidney Association and in the process are raising organ donor awareness. We thank them and everyone who was involved in supporting their mighty effort," she said.

Orla’s four kidney transplants came as a result of her hereditary kidney condition, Bidel Vardot Syndrome. She underwent two living donor kidney transplants, one from her mother Nora in 1991 and following two deceased donor kidney transplants which each lasted four years, her most recent successful and longest surviving transplant, took place in 2008 with a kidney donated by her younger brother Cathal Hogan. Orla comes from a well-known sporting family in Tipperary.Her father Séamus Hogan played hurling for Tipperary when they won the all-Ireland final in 1971.

Anyone wishing to contribute to the event’s fundraiser can do so online to www.justgiving.com/fundrais ing/francis-hogan-549-hogan

Individuals who wish to support organ donation are encouraged to Share their Wishes and keep the reminders of their decision available by carrying the organ donor card, permitting Code 115 to be included on their driver’s licence or having the ‘digital organ donor card’ App on their smartphone. Organ Donor Cards can be requested by visiting the IKA websitewww.ika.ie/get-a-donor- card or  to your phone, phoning the Irish Kidney Association o n 01 6205306 or Free text the word DONOR to 50050.